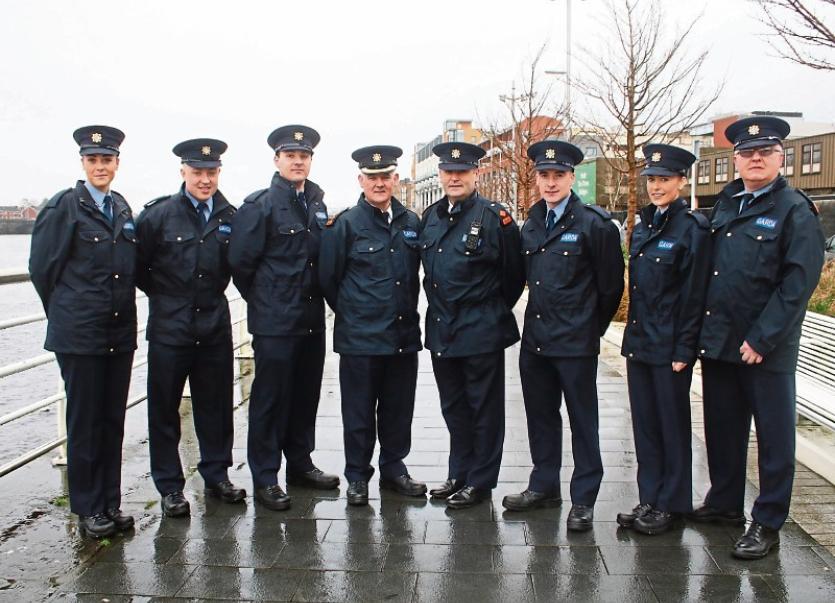 THE LIMERICK garda division has received an early Christmas present following the deployment of five new recruits at Henry Street this week.

After 32 weeks at Templemore, the young group of enthusiastic probationary officers were introduced to their division leader, Chief Superintendent David Sheahan this Friday morning.

Chief Super Sheahan told the Limerick Leader that the new recruits are “bringing a lot of new energy, new enthusiasm and new ideas” to the local force, which has more than 550 officers.

“My big message to them was to make sure that the community which they are serving is the focus. It has to be their focus because, without that, we lose everything else.”

He added that Limerick is one of the top training grounds in the country for a young garda.

“I have traversed a lot of this country in a lot divisions. Without fear of contradiction, the learning that they will get here will be second to none. The supports that we have here is second to none. It is a really fertile place for them to learn their trade. And they are the future, and we have got to provide them with the level of experience and expertise at that level.”

And one of the five recruits will be tasked with working the Christmas day shift, Chief Super Sheahan added.

“There’s one garda whose first day of duty will be Christmas morning. It’s a bit hard for her but, look it, that’s what we are. We are public servants at the end of the day, and we need to have people here on Christmas day. It’s probably one of our quieter days, but at the same time we need to provide a service to the community.”

Sgt John Flanagan, who oversees the continuous professional development unit at Henry Street, said that he is confident that there will be another tranche of new recruits in the coming months.

“It is great to get extra resources and have people coming into the division, a fresh face, new from Templemore. We have a great experience here in Limerick with probationer gardai coming here since 2015. It’s great for Limerick city, it is great for the people we serve. It greatly enhances our ability to get members out on the ground in patrol cars, on the beat, on bicycles around the city.”

Gardai Brian Kelly, Richard Collins and Ruth Glancy told the Leader that they “very excited” about the challenge ahead.

Gda Kelly, from Ballina, said: “I am excited to be starting and I am looking forward to it. I see Limerick as a great place to learn.”