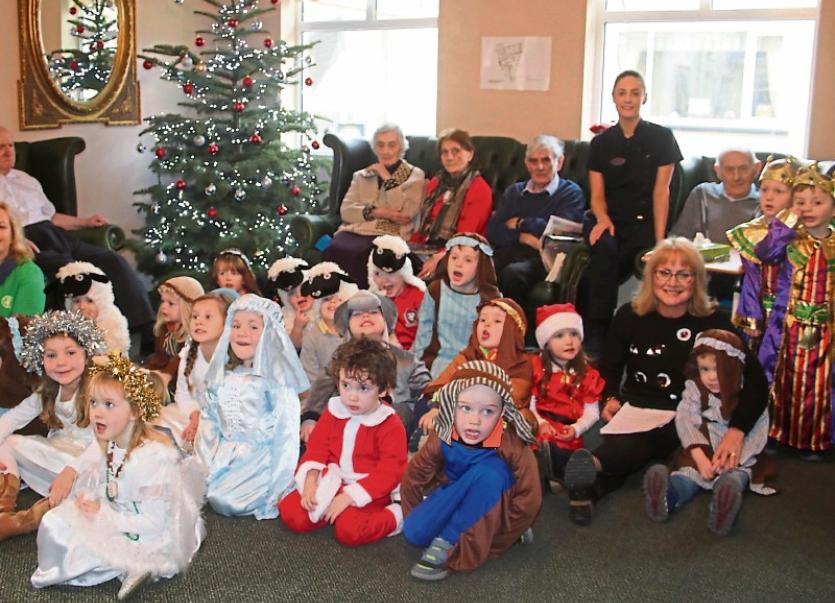 THERE may be decades in age difference but the smiles on display in a Castleconnell nursing home were timeless.

Twenty-two boys and girls from Cute and Clever Playschool, Lisnagry, entertained 22 residents in Rosary Hill House. The children, aged between three and five, performed The Story of Christmas and sang carols. This is the first time such an initiative, involving preschool children, has been undertaken in the county, said Limerick Childcare Committee.

Proprietor of Cute and Clever, Phil Foley came up with the idea after watching a UK documentary.

“They were introducing four- year-olds into nursing homes in England. After six weeks there was a big difference in the residents after interacting with the children. This is our third visit to Rosary Hill House. The children love it,” said Phil.

Also involved in the novel idea are Limerick Childcare Committee, and Michael O’Mahony and  Mary  Bourke  Corkery, of Pay it Forward Limerick. Denise McEvoy, director of nursing at Rosary Hill House, is as enthusiastic about the project as Phil.

“The children’s performance was brilliant. The energy they bring to the whole nursing home is incredible – everybody just lights up when they come in. They interact so well. I thought the children might be a little shy but they go up, shake their hands and say their name. They brought a lovely Christmassy atmosphere on Tuesday,” said Denise.

“We were all delighted with it. They are very talented. They are coming again in January – they are getting fond of us,” said Gerry, who is 80.