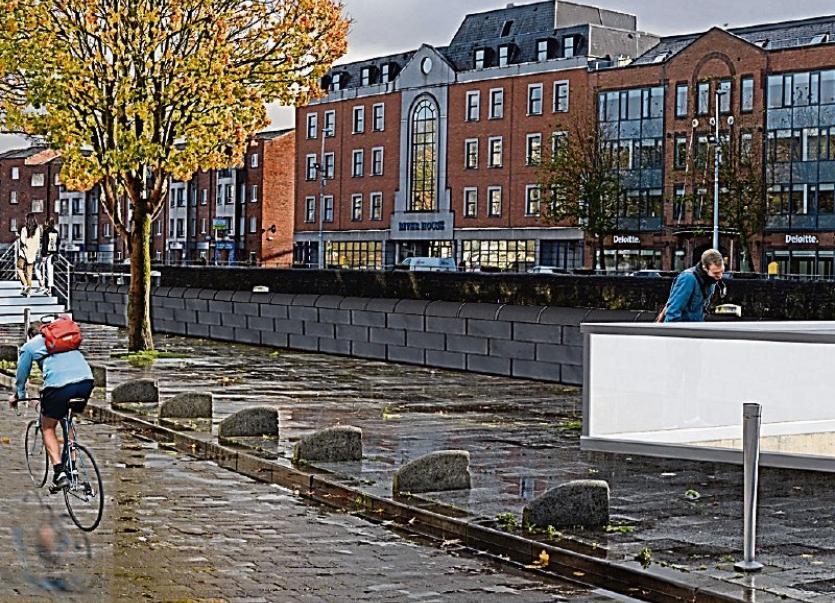 The proposed flood defence design, produced by Arup JBA, at George’s Quay. Below, the bank in the King’s Island is to be raised to create a heightened walkway

THE Limerick Leader can this week reveal the first designs for the city’s long-awaited flood defences.

Engineers from Arup JBA have teamed up with local authority officials to produce detailed designs for defences around City Hall and King John’s Castle, George’s Quay and notably, the King’s Island area which was devastated by flooding back in February 2014.​

The designs have emerged this week following confirmation of €57m in flood funding for flood defences across Limerick.

They were put on public display first in City Hall, then late this Wednesday in the King’s Island community centre.

Chief among the plans for St Mar​y’s Park and its surrounds is the erection of a walkway around most of the Island Field.

The embankment is to be widened and the land substantially raised to keep the water at bay.

It will stretch as far as the area’s ball alley, before swinging right, and following the line of Munchin’s Street and back out of the estate.

But Independent councillor John Gilligan, who lives in Lee Estate, feels the proposed embankment does not go far enough.

“I’m delighted flood defences are in place, but I wanted it to follow the line of the bank. But it’s not doing that, for no good reason I can think of, other than the fact – I am told – we are upsetting a protected area,” he said.​

The veteran councillor rejected this suggestion, however, saying: “This idea that it would somehow cause a huge impact on the environment is nonsense when you consider the existing walkway has been there for 150 years.”

He said leaving part of the bank still inaccessible will create major problems.

“The way​ to do this is to follow the line of the bank. But they keep coming back and telling us it’s an area of special interest, as is all the bank of the Shannon. But that doesn’t add up to me.

“If the area is so special, how come there is a dead donkey lying there for the last two weeks? If that’s how we go about conservation, then I throw my hat at it,” Cllr Gilligan added.

The flood defences aims to minimise the risk of flooding to the existing community.

Meanwhile, the village of Castleconnell, prone to high-tides and heavy flooding from the Shannon, will be given almost three-quarters of a million euro to tackle extreme weather.

This week, the minister with responsibility for flood protection Kevin ‘Boxer’ Moran pledged €720,000 for flood defence projects in the village.

The allocation comes under the Catchment Flood Risk Assessment and Management programme.

Fine Gael Senator Kieran O’Donnell – who invited the minister to the banks of the Shannon – has welcomed the allocation.

“I know that this funding will make a big difference to people’s lives in Castleconnell Village. Flooding, as we all know, can have a devastating effect on our communities. Castleconnell Village had been subjected to severe flooding in 2009 and again in early 2016,” he said.

Mr O’Donnell – who will run for Fine Gael in the general election – said the fact 100 people attended a meeting where it was previously highlighted there were no flood defences for the village demonstrates their importance to the community.​

“Following this, I personally arranged a subsequent public consultation in March 2017 for Castleconnell with the OPW. Thereafter, I continued to made relentless representations to the OPW and Minister Sean Canny, and his successor Minister ‘Boxer’ Moran,” he said.

Separately, Mr Moran has confirmed to Mr O’Donnell that the Office of Public Works will also designate an official to assist the council in advancing the Limerick flood defence projects.