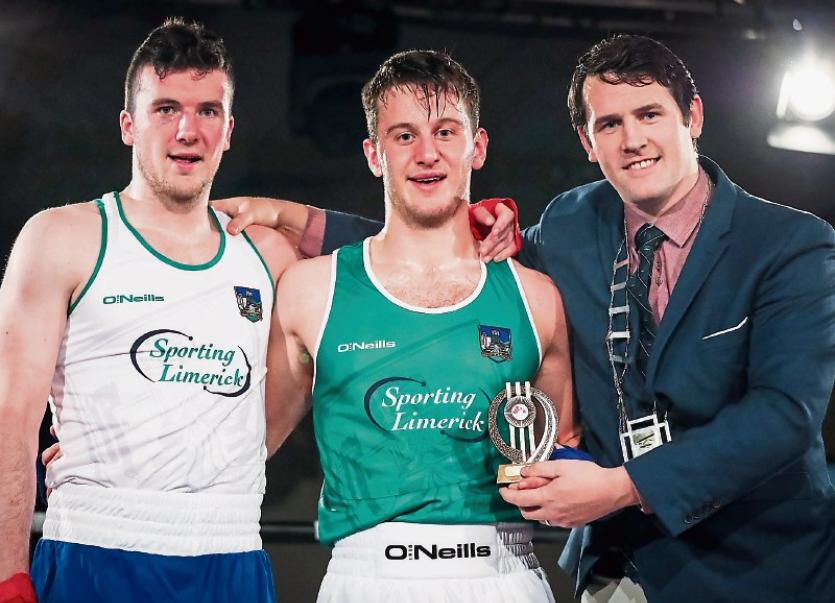 One of the last events Cllr Daly wore the mayoral chain at was a Limerick under-21 hurlers boxing fundraiser. He is pictured with Tom Morrissey and Declan Hannon Picture: Keith Wiseman

GARDAI are investigating the theft of a Limerick mayoral chain – believed to be worth €10,000 – from the glove box of a politician's car.

Independent councillor Frankie Daly, who was deputising for the metropolitan mayor of Limerick over the weekend, left the chain of office in his car overnight in readiness for an event this Monday.

But he was left reeling after realising the gold-and-silver insignia had been stolen from the car parked outside his home in the Irish Estates, Corbally.

He has formally reported the theft to the gardai. And the car – a 2003 Toyota Avensis – has been sent for a forensic examination, and gardai are appealing for the safe return of the chain.

”It’s unbelievable. My heart sank into my boots when I realised it had gone. I was in total shock,” Cllr Daly said. “This chain belongs to the people: It’s an attack on the people of Limerick.”

Metropolitan mayor Cllr Sean Lynch called the theft an “act of desperation” so close to Christmas.

Cllr Daly said he believed his car key was cloned, as his vehicle did not appear to have had any damage done to it.

A number of other items were taken from the vehicle, including Christmas presents given to his wife Kate, and their seven-year-old son Joshua’s passport.

The chain was specially commissioned for the merger of Limerick City and County Council and was originally worn by the new authority’s first leader, Cllr Kevin Sheahan.

In recent times, the centuries-old chain has been preferred by Limerick’s first citizen, with the more modern chain donned by the metropolitan district mayor and his deputies.

Cllr Daly added: “Not only did it have monetary value, it had a lot of symbolism as it was commissioned for the two councils coming together. There is gold and silver on this chain. It’s quite big and chunky.”

The former Labour councillor said he had planned to wear the chain when presenting a set of jerseys, which he had sponsored, to the Our Lady of Lourdes soccer team this Monday.

“I’m very disappointed this would happen in a quiet neighbourhood, that Limerick people would try and profit from stealing from other’s property,” he said.

Metropolitan mayor Lynch appealed for the safe return of the chain.

“It’s just desperation, the time of year that is in it.”

“You’d always have an element who would be opportunist. Be mindful of the time of year it is now. People are desperate for cash, so be careful of leaving things exposed,” he added.

It’s the second time a mayoral chain has been stolen in Limerick – thieves took the ancient mayoral chain in Kieran O’Hanlon’s first term in office​ back in 1996, but it was recovered.