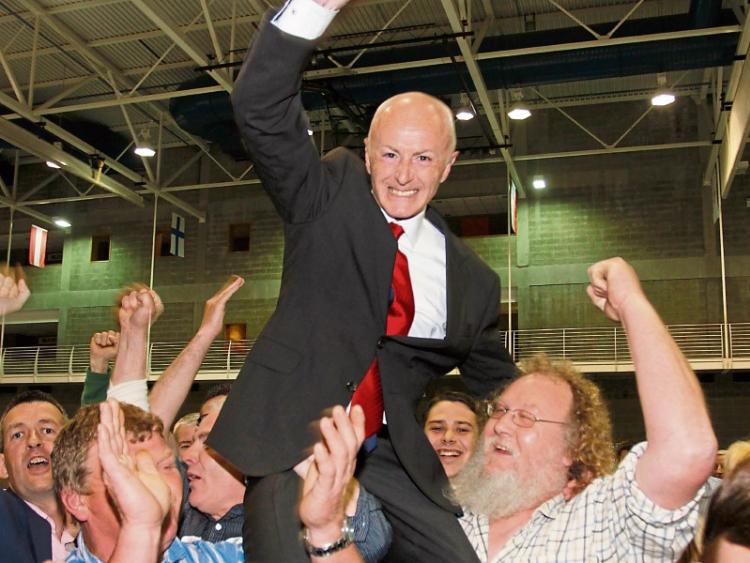 Seamus Browne celebrates during the local elections in 2014. He is Sinn Fein's candidate for the next general election

SINN Fein has selected Cllr Seamus Browne as its candidate to contest the next general election in the three-seater Limerick County constituency.

He was selected at a party convention in Abbeyfeale this Tuesday where he said he was honoured to receive the nomination.

Speaking to a packed convention, Cllr Browne predicted: “We will build on the achievements of the last General Election. We had a good election in 2016 and the next election will be even better.”

Cllr Browne clocked up 3,347 first preferences or 7.5% of the vote in 2016 before being eliminated on the fourth count.

“We must continue to fight for the poorest and weakest in society while also sustaining economic and social progress. Sinn Féin wishes to create an Ireland that is truly fair and equal,” Cllr Browne said. “We have a two-tier society that benefits the wealthy elite, not the majority of hard working families struggling to survive.

“I believe that a fair and equal society is possible. I believe it is possible to provide first class public services while sustaining economic progress and growth.

“I believe that cronyism and greed can be replaced with fairness and hope. The type of country I want to see is based on the right to decent work with decent pay, access to first class public services, affordable childcare, a fair tax system that sees banks and others paying their fair share of tax and advancing the all Ireland economy for all our benefit.”

Cllr Browne added that he wanted to make rural Ireland “a sustainable place to live and work, a place where the quality of life is matched by the quality of public services”.

“People in rural Ireland are sick of being treated as second class citizens. They are annoyed with chronic underinvestment and they are angry at the lack of jobs and opportunity.”

Just two political parties have now selected candidates.  At a hastily convened convention two weeks ago, Fine Gael selected its two sitting candidates, Minister of State Patrick O’Donovan and Deputy Tom Neville. But Fianna Fail, which has one sitting TD, Niall Collins,  has yet to set a date for its selection convention.

The party is expected to stand two candidates.

Another former Fianna Fail member,  Cllr Emmett O’Brien, who also stood as an independent in 2016, has indicated he will not stand next time out.