Limerick councillors 'should have input' into €150m Project Opera proposal 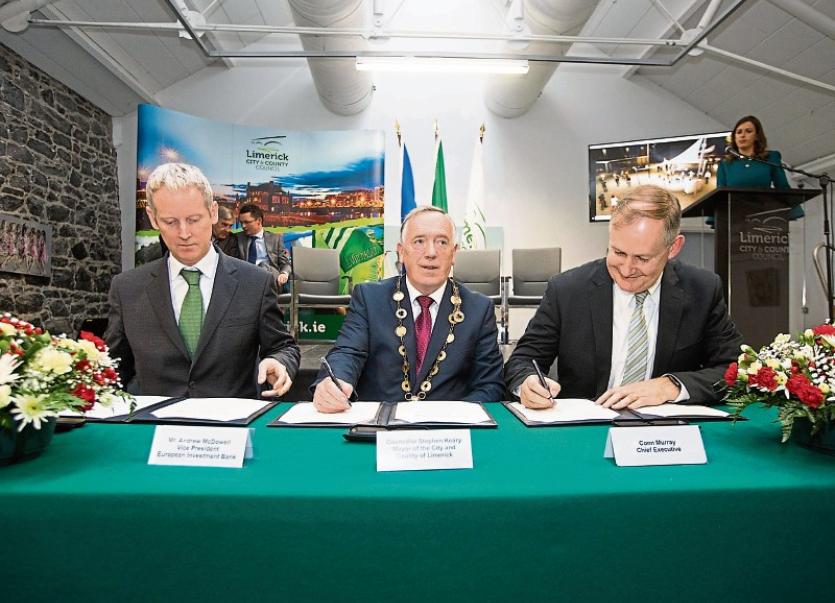 Half of Project Opera is being funded through a loan from the European Investment Bank, which Mayor Stephen Keary and Conn Murray signed with Andrew McDowell recently

LIMERICK Solidarity member Cian Prendiville has called for a special meeting to be held to discuss the future direction of Project Opera.

Cllr Prendiville has written to Mayor Stephen Keary urging him to convene a special meeting of the local authority following a groundswell in support for the inclusion of living spaces in the €150m development.​

At present, the scheme – which forms a key plank of the Limerick 2030 renewal plan – includes three towering office blocks, and limited commercial space.

But, crucially, no apartments are in the plan, leading to formal submissions to the council from homeless charities Novas among others, as the housing crisis continues unabated.

And with An Bord Pleanala now set to be the body to formally decide on the multi-million euro plan, Cllr Prendiville feels councillors need to assess their position.

He feels members should help put together the planning application which will go to An Bord Pleanala.​

“As part of a public consultation process, I believe 27 submissions were made. Many of these, including the submission from myself, Novas, the leading housing charity in Limerick, and others urged the council to include apartments in the plans. In my submission, I welcomed the plans to develop this site, but outlined a case for including accommodation in the plans,” he said.

Cllr Prendiville added: “The omission of residential accommodation would further increase pressure on residential rents in the city. At a time of already rapidly rising rents, this will make the housing crisis worse, and goes against the stated goal of the council to “reduce the number of people living in deprivation. Without any residential component, the area risks becoming a deadzone after 6pm, and on weekends. This goes against best planning, which is for a mixed use, to ensure a constant flow of people.” ​

The northside councillor and general election candidate wants to see members meet early in January to discuss this issue.

The funding for Project Opera is being provided by both the European Investment Bank and the Council of Europe bank in the form of a loan.

Mayor Keary has yet to respond to Cllr Prendiville’s letter. He was not available for comment.