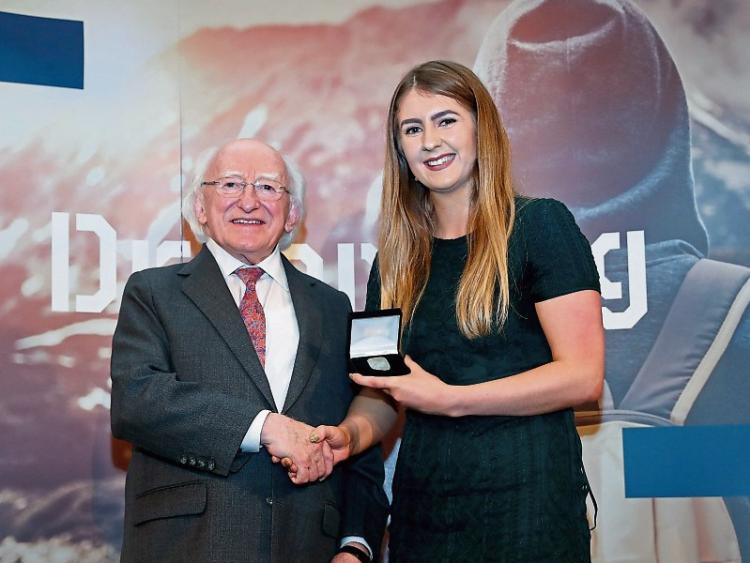 Tara Rogers, Aisling Kelleher, Maria Prendeville and Pauline Frewen were among 55 young people from across Ireland who received their Gold Award at a ceremony at Dublin Castle.

Since its inception in 1985 an estimated 150,000 young Irish people have completed a Gaisce Award, including former Rose of Tralee Maria Walsh and Irish rugby international Robbie Henshaw.

Gaisce – The President’s Award is a direct challenge from President Michael D Higgins to young people aged 15-25 to dream big and realise their potential, push their boundaries and develop skills which will stand to them throughout their lives.

This year’s Gold Awardees have successfully completed five challenge areas for 52 weeks or more – volunteering with a charity or community group, developing an existing skill or learned something new, became more active through sport or exercise, took part in a four-day adventure journey  discovering the great outdoors as part of a team, and broadened their horizons on a five day residential stay away from home.

All of the recipients previously received the Gaisce Bronze and Silver awards.

Tara Rogers, who is from Hospital, undertook a Residential Project to Lourdes where she learned about her faith. She says the pilgrimage made her faith stronger.

For the community Involvement part of her Gold award, Aisling Kelleher from Ballinacurra volunteered with VTP (Voluntary Tuition Programme) for each of her four years in college in Trinity College Dublin, a charity that matches students, staff and graduates with children from inner city Dublin providing them with one-to-one tuition and other activities. Aisling also became an important part of the VTP team as a committee member.

In addition to her volunteering, Aisling worked on the VTP committee for her Personal skill, attended contemporary dance classes for her Physical Recreation, and completed the 109km long “Border Abbeys Way” in Scotland for her Adventure Journey.

Maria Prendeville joined her local Tidy Town’s group in Askeaton for her Community Involvement while she undertook to improve on a passion, art, and undertook classes to help her improve as part of her Personal Skill.

Pauline Frewen from Ardpatrick is the first young person from Macra na Feirme to receive a Gold Award, for which she really pushed herself out of her comfort zone.