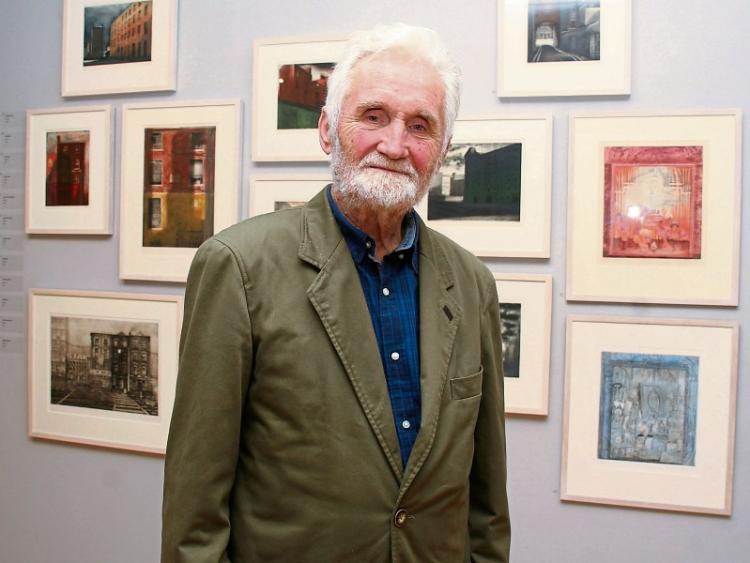 Artist Dietrich Blodau at his exhibition A Life Of Observations in the Hunt Museum Picture: Adrian Butler

IT’S hard to credit now but when Dietrich Blodau arrived at the Limerick College of Art in 1970 he was regarded as something of an exotic.

“I was the only foreigner,” he recalled with a sense of wonder as a retrospective of his life’s work opened in the Hunt Museum.

Dietrich was German, in a college where everybody else was Irish and most were from Limerick. And he brought with him some of the excitement of the new mood that swept Europe in the 1960s, affecting politics, art, music, fashion and lifestyle. Most particularly, he was from Berlin, a hot-spot for new ideas.

For Dietrich himself, Berlin had proved to be a life-changer. The son and grandson of a pastor in the Ruhr Valley, he had trained initially as a graphic designer.

But having worked for a number of years as a graphic designer, he headed off to Berlin to study fine art at a college there.

“I didn’t want to get stuck,” he explained. But he was also inexorably drawn to the city and the freedom it represented.

“Berlin was a very special place in the mid-60s,” Dietrich said. “Berlin was an island within Germany.”

After World War II, the city had been divided into zones. But in the beginning, there was no wall. That came in 1963, when the wall separated the city.

Crucially, for Dietrich and many other young people, Berlin had special status within Germany.

In a country where military service was compulsory, Berlin was exempt. “The last thing I wanted was to go into the army. That was another reason for me.”

Because of that, the mood among many students and young people was anti-military, anti-establishment. “It was possible but very very difficult to avoid military service.”

“I was interested always in politics and the tradition of German art always is very political,” Dietrich explained.

But Berlin and the art college also changed his life in other ways. It was there he met fellow artist Carol Holloway, the young English woman who was to become his wife and life-long partner.

After four years in Berlin, Dietrich and Carol made the decision to move to Wales where Carol’s parents had settled.

“The problem was how to make some money,” Dietrich recalled. But all that changed following a visit to Ireland.

“I had some friends here in Ireland. They were from Berlin as well and got a grant to come to Ireland.”

The friends were based near Kilkenny, a place which was attracting craftspeople and artists as Kilkenny Design was coming into its own. Fortuitously, at an exhibition there, Dietrich met Limerick artist Jack Donovan, then director of the Limerick Art College.

“He said you should come to Limerick and visit the college.”

Dietrich did and it turned out to be the beginning of a long association which lasted from 1970 until his retirement in 2003.

“I was interested in starting a print workshop and they gave me absolute freedom.”

“It was a very different school then. It was very small.”

And the emphasis was on painting and drawing, with most, though not all, of the graduates going on to become teachers.

“I got on very well with the students even though my English was very bad,” he smiled. “I still have friends from that time.”

“I was a complete outsider. But I loved it. It was very unstructured,” he continued. And the ever-present problems with finance and materials didn’t bother him.

In addition to starting up the print workshop, first for etching and later for lithographs, he also taught drawing and started photography.

“It was very much a workshop atmosphere,” he recalled.

Keen to open the wider world of art to his students, Dietrich took them on trips to Paris, London, Budapest, Moscow, Amsterdam and elsewhere to visit galleries, art colleges and artists’ studios.

“I thought we were too isolated in Limerick,” he said, explaining the reasoning behind the undertaking. The trips, he recalled, were largely financed by an annual Print Auction in the college in which everyone, students and lecturers, took part.

Despite a busy college life, Dietrich was also determined to keep doing his own work and set up a studio in the rambling Georgian house he and Carol acquired outside Rathkeale in 1973.

“It took a lot of hard work to restore it,” Dietrich explained. ”But we had running water and we had a telephone.”

That, he laughed, was more than in their previous home in Kildimo.

He also teamed up with Colonel Sean O’Driscoll, a retired US Airforce man who had restored the historic Castlematrix in Rathkeale, organising summer courses in art in a setting where poet Edmund Spenser had met Sir Walter Raleigh had once been.

“The idea was good,” Dietrich says of the venture now. “But it was before its time.”

And then, in the 1980s, came the first of many trips to Cuba, which was then only beginning to open up to tourism, travelling with Carol and their three children, Peter, Nina and Alex.

That first visit ignited a passion for the country, its people, music and art.

“It is a wonderful country. They are wonderful people,” said Dietrich. Other visits followed and Dietrich came to know Cuban artists and their studios and workshops.

Cuba became a strong theme running through his own work, and he held exhibitions both there and here in Ireland of his Cuban inspired work. He also felt impelled to try to find ways to help Cuban artists and bring Cuban art to a wider audience.

“It is a small little country with a very difficult history,” he explained simply.

“I am not making political art,” he stressed. “I am making landscapes, seascapes, townscapes.”

His lifelong interest in art and in politics has made him very aware that it is difficult to create art that is political and not just propaganda.

“Propaganda is not art,” he emphasised.

But he was and is eager for people to see and understand the Cuba he knows.

“To go there, to exhibit there, to show their work and what they are interested in, that is already a political statement,” he added. “What is political is having a wonderful workshop in the centre of Havana and that the state makes it possible for art to flourish. The same is true of music. They are very supportive of music.”

Over his lifetime in Limerick, Dietrich has returned regularly to Germany for family reunions, where it is the history that was denied to him growing up during WW2 and afterwards that he now absorbs.

At school near Dortmund in the Ruhr Valley, he was told “nothing, absolutely nothing” of the Holocaust. And he is pained to recall now that the bank where he brought his pocket money had once been a synagogue and that many Jews had once lived in the town he grew up in, yet he was told nothing.

“We lived in a false pretense,” he says now. “They wanted to forget.”

East Germany and the communists were held up as the enemy, Dietrich explained but the real enemy lay within, in the cover-up and the forgetting. It was only in Berlin that he began to find out the truth.

“We started going to the libraries, finding out what happened.”

Only in the 1960s and 1970s did change begin to come, and then only very slowly, he explained.

The “brutalist generation” which taught him is now gone.

“Today it is a very different country but still there are new problems on the horizon.” There is, he believes, the risk of a collapse of the EU, the rise of nationalism in countries around Europe, of right wing extremism in Germany.

But even now, he acknowledged: “It is hard to be a German.”

The retrospective of Dietrich Blodau’s work at the Hunt Museum is entitled, fittingly, A Life of Observations and the 75 or so pieces in the exhibition trace his work from the very beginning, a poster he did in 1959. The exhibition includes paintings, illustrations, prints as well as posters with something from almost every year of his working life.

It will run until January 13. The exhibition marks his 80th birthday but also his contribution to the development of art in Ireland.