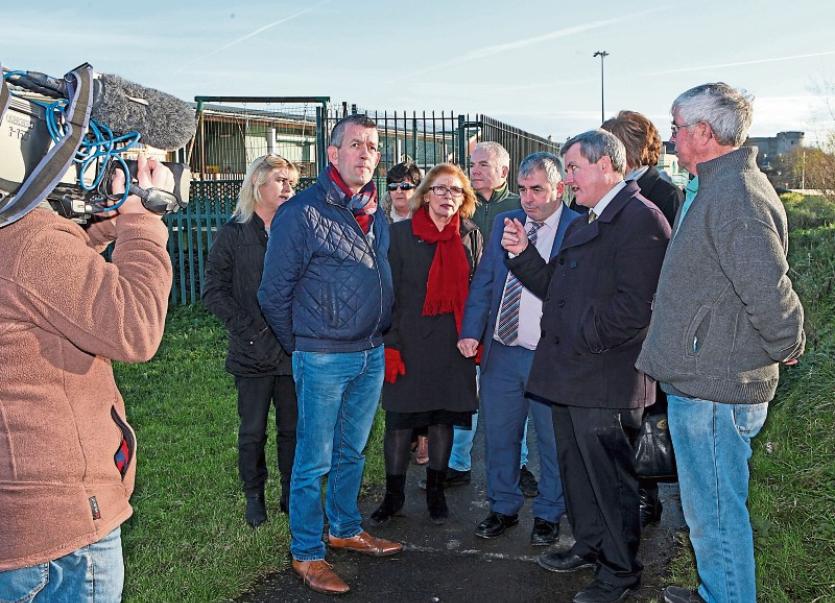 A PLANNING application for flood defences across Limerick city is to be made early in 2018, it has been confirmed.

The long-awaited move comes after the Minister with responsibility for the Office of Public Works (OPW) Kevin ‘Boxer' Moran visited flood-hit communities across Limerick.

The Independent Alliance TD Kevin ‘Boxer’ Moran was in the city on Friday at the invite of Senator Kieran O’Donnell, where he met people in Annacotty, Castleconnell, Corbally and the docklands area. He also took a tour of the St Mary’s Park area, which was hit with devastating flooding in early 2014.

And he reaffirmed the government’s commitment to delivering €55m for flood defences, adding a Cfram report outlining what needs doing will be made available by the end of the month.

“We have identified a number of schemes in and around the Limerick area, and particularly where we are in the King’s Island. Government is fully committed to delivering this for the people of Limerick. They have listened to a great amount of talk for the last number of years. But we have €440m for five major schemes around the country, and Limerick is one of them,” Mr Moran said.

The minister said as a way of getting the flood defence projects through planning quickly, some could be designated as strategic infrastructural development, which would mean they bypass local planning offices. And he pledged that even if the government were to fall, the funding is safe.

Seanie Quinlivan, who lives in St Mary’s Park, welcomed the fact a wall has been erected in Verdant Place.

But he said it is high time the sandbags on the rest of the island bank are replaced with a more permanent structure.

“We’re delighted with the wall at Verdant Place. But we want to see work on the bank. It is one of the most beautiful walks in Limerick. There are lots of senior citizens who like to walk the bank. I’m getting a commitment from Boxer Moran it is in the plan,” he said.

“What we witnessed in 2014 was really frightening, and we hope this never happens again. The fact of the matter is the threat of it is there, with global warming.

“This is why we need to fast-track the bank,” he added.

He said: “This is what we were told in 2014 when the then Minister [Brian Hayes] came down and promised whatever we needed would be delivered. But three years on, some of the work has been done, but it should have happened before.”

Mr O’Donnell – who will run in the general election for Fine Gael- described the minister as being a “breath of fresh air”.

“We need to get all these projects in Limerick in for planning and design and have them built as quickly as possible.

“This was my objective in bringing Boxer Moran down here,” he told the Limerick Leader.

Residents in St Mary’s Park will be able to attend an information session relating to flood defences on the week commencing Monday, December 18.

Former Education Minister Jan O’Sullivan said: “I am particularly pleased that the Minister took the time to meet residents in St Mary’s Park and Corbally and that he was happy and willing to engage with them.”