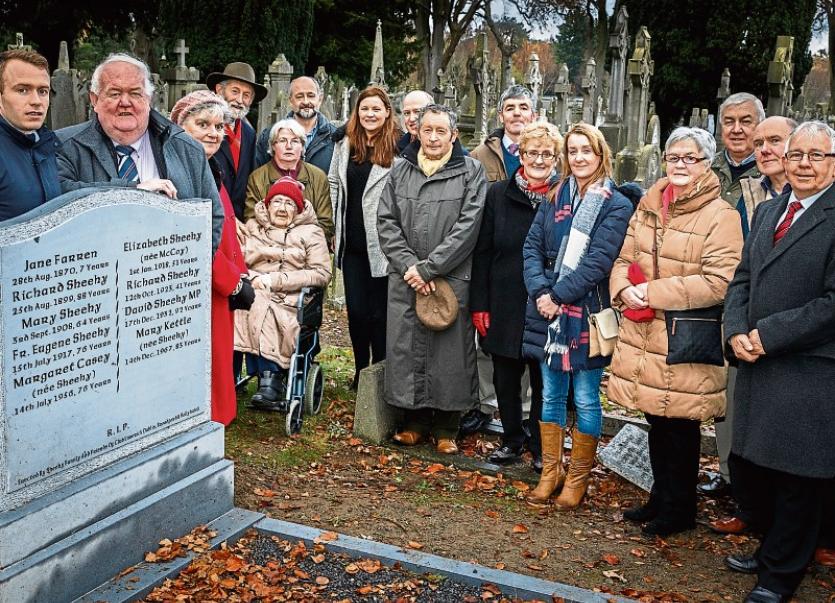 Members of the extended Sheehy family, with members of Club Limerick Dublin and the Broadford Historical Society at the unveiling of the memorial stone at the Sheehy grave in Glasnevin

CLUB Limerick Dublin has helped to close a historical gap by honouring the role played and contribution made to the nation by many members of the Sheehy family from Broadford.

Earlier this year, the Broadford Historical Society honoured two of the parish’s noble sons, Fr Eugene Sheehy, the Land League priest, and his brother David, the Irish Parliamentary Party MP by unveiling a plaque and story board within sight of their home place.

But on Saturday, members of the society travelled to Glasnevin Cemetery in Dublin where for a century, the final resting place of the two men was inconspicuous. Now, thanks to the efforts of Club Limerick Dublin, and with the backing and support of the Broadford Historical Society, a memorial stands in their honour, which also honours other family members.

“The genesis of the idea took place last October,” John explained after Saturday’s unveiling. “Having laid a wreath on the grave, we said we’ll do something about this if it’s possible at all.” An approach was made to the family and the project took off from there.

It was important that the project take place in 2017, the centenary of Fr Eugene’s death, John continued.

“A former curate in Kilmallock and Parish Priest of Bruree, Eugene was radicalised by the local political fervour in that area and he became a key activist within the National Land League serving time in jail with Charles Stewart Parnell on one occasion. On their release they went together on a lecture tour of the USA.  He was a confidante of Tom Clarke, John Devoy and others in the IRB and when the Rising broke in 1916, he headed for the GPO where he offered spiritual assistance to the rebels,” he explained.

“David Sheehy, who died on 20 December 1932, was a very influential figure in the Irish National League and played a key role in the land war in the late 19th century. He was an MP from 1885 for over 30 years and served as party secretary to the Irish Parliamentary Party for whom he was also its director of elections,”Mr O’Sullivan added. “He would have been expected to be a senior minister in a Home Rule parliament and his elegant home at No 2 Belvedere Place was a meeting place for the young generation of nationalists and literati.”

Speaking at Glasnevin, descendant Fr Richard Sheehy said: “If there is one thing we can say about Eugene and David, and I think it has been true of the succeeding generations, it’s that they were people of conviction who were not content to sit back on their laurels while other people especially the poor were suffering. They were not ready to tolerate injustice.

“They had a highly developed social conscience and allowed that conscience to direct how they would live and act. Acting in this way they were not concerned how others might think or how it would look.”

Also remembered in the memorial is Land League supporter Richard Sheehy of Broadford, father of the Sheehy brothers, who moved to Dublin following the death of his wife, Johanna Shea and who is buried there along with their daughter Mary who died in 1908.

David’s  wife  Elizabeth “Bessie” McCoy from Loughill, who was described as a woman of “strong qualities and strong independence of mind” is also there in the grave alongside the remains of another Sheehy brother, Richard “Dick” Sheehy a barrister and a Professor of Law at UCC who died in 1923.

The grave also contains the remains of an unrelated child, Jane Farren, who died in 1870.

“We are not here today just to honour two brothers but the whole Sheehy family who made a huge contribution to public life in Ireland. We hope that in commemorating the family in this the centenary of the death of Fr. Eugene that it will inspire other Limerick people of today to give their all and be an inspiration to us whether it’s in public life or on the field of play.”

Among those attending Saturday’s ceremony was Matthew O’Casey, the grandson of Margaret Sheehy, a daughter of David and Bessie who is buried in Glasnevin. “Margaret wasn’t as politically motivated as her family. Her passion was the dramatic arts,” he explained. She was a playwright and actor.