Limerick man among those awarded special medal for Jadotville siege 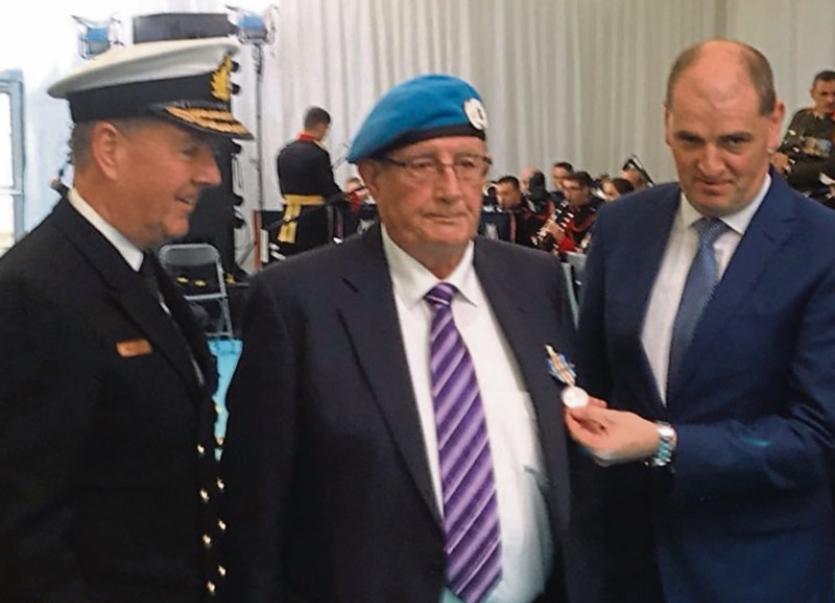 Tadhg Quinn receiving his Bonn Jadotville from Minister of State with responsibility for Defence, Paul Kehoe and Chief of Staff of the Defence Forces, Vice Admiral Mark Mellett

THERE was pride and not a little sadness when some three dozen or so surviving veterans of the siege of Jadotville were presented with a specially created medal An Bonn Jadotville, the Jadotville Medal, at a ceremony in Athlone.

The medal was commissioned to honour the bravery and courage of the 155 men of A Company, 35th Infantry Battalion who took part in the siege in September 1961, while on a  peace-keeping mission to civil-war torn Congo.

Minister of State with responsibility for Defence, Paul Kehoe presented the medals to the surviving veterans and to the family representatives of deceased members.

The words inscribed on the medals, Cosaint Chalma (valiant defence) and Misneach (courage) had been carefully chosen in order to pay tribute to the courageous actions of the men of “A” Company, Minister Kehoe said. 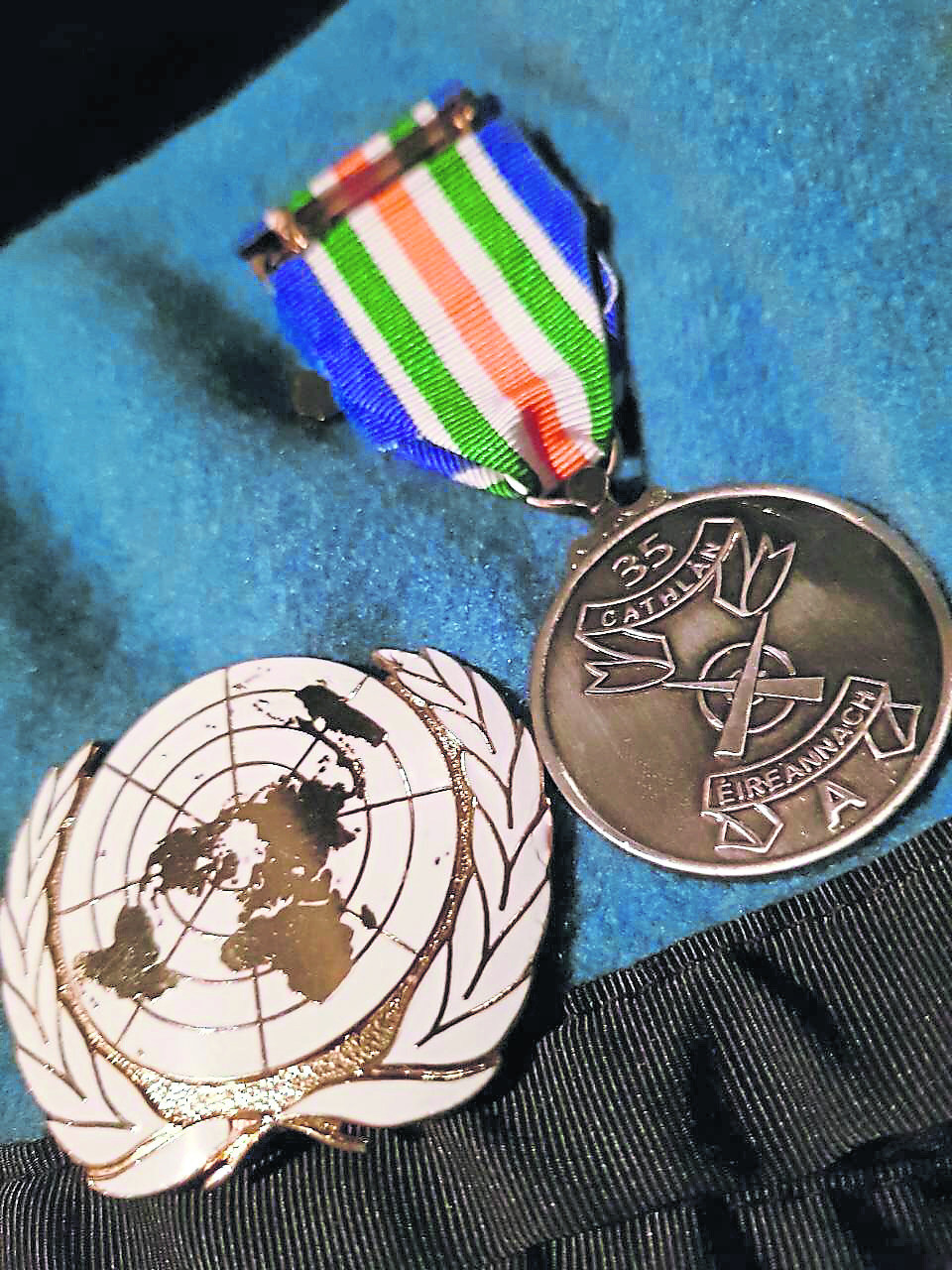 “The retelling of the events at Jadotville does not and cannot reflect the incredible reality of what happened during the siege and its aftermath. It can only briefly suggest the courage you showed in your willingness to act and the bravery displayed in your every actions,” he continued.

“Despite the overwhelming numbers opposing them, the men of ‘A’ company retained their resolve and remained unshaken during the attack.”

For Tadhg Quinn, from Purt, Abbeyfeale, the ceremony brought a fitting end to an ignominious scandal, in which disastrous tactical errors were made and the men of A company were sent into a conflict zone without adequate arms, provisioning or back-up. But these errors were subsequently covered up and instead the men were vilified and scorned.

Having been ordered to Jadotville on September 9, the 155-strong A company under Comdt Pat Quinlan came under sustained attack on September 13 from a 600-strong force of Katanganese rebels.

“From a tactical point of view, it was a disaster,” Tadhg said, recalling the events of 56 years ago.

Comdt Quinlan knew they were in trouble, Tadhg continued.

“We all knew we were in trouble.”

For four days, the siege lasted but finally, with no food, water or ammunition, the men were forced to surrender. Thanks however to the decisions made by Commandant Quinlan not one Irish life had been lost.

But Tadhg remains adamant that what he and his comrades endured when they returned to Ireland was “absolutely brutal”.

“The way we were treated was absolutely scandalous,” he said. They were ignored, taunted, scorned and some were even set upon.

“There was more blood spilled than during the fighting. If you were called a coward there was only one way to sort that out.

“It came from the very top down. But it was nothing to what Comdt Quinlan put up with. He was totally ignored,” Mr Quinn said.

Worse, however, was that there was, Mr Quinn believes, a sustained attempt at cover up.

“All we needed was food, water and ammunition and we could have been there yet,” Tadhg said this week. “We were vilified,”

And every government since has maintained the cover-up, he added.

“Their attitude was if we ignore it, they will go away and forget it.”

Happily, thanks in large part to a book by JD Power and the film based on it, Siege of Jadotville, the real story of what happened in September 1961 reached a national and international audience and the men and their commandant were vindicated.

But without this, Tadhg is certain, the public and state recognition of the men would not have happened. Earlier this year, a plinth was unveiled at Customs Barracks, Athlone, naming all the men of A company.

And last Saturday, the survivors or the family members of deceased men received their special Jadotville medals. But  the sense of rightness at being finally vindicated  was spliced with sadness that so many comrades had not lived to see the day.

“I am not into medals,” said Tadhg who helped lay a wreath at the plinth in memory of his deceased comrades. “ But for those who died, this would have been closure. It was very very sad for them. They were living under this great black cloud always.”

And why, he asked and will always ponder, had it taken so long to rectify.