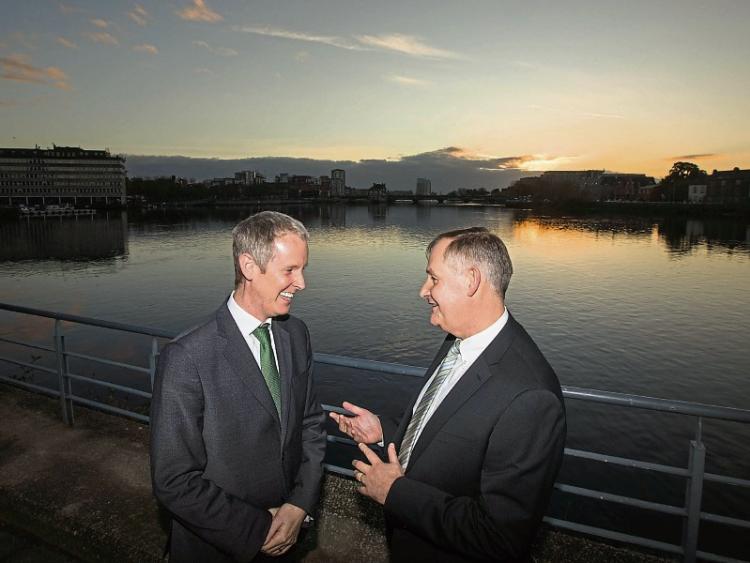 Conn Murray with Andrew McDowell of the EIB. The Council CEO said under the plan the Council would be ‘required to dezone some land for residential accommodation, which would be very difficult

There was anger this week as city and county councillors debated the NPF – also known as Ireland 2040 – which the Council’s acting senior planner Maria Woods said shows Cork as an “emerging international centre of scale”, but Limerick as “an important national and regional driver of growth”.

“We need the same recognition as Cork if there is potential for balanced regional growth,” she told members at County Hall.

The plan has already been widely criticised for projecting only a growth in population of 52,000 in Limerick city by 2040. Cork city, by contrast, has a projected growth of 115,000.

This comes against the backdrop of the Limerick 2030 plan which envisages 12,000 new jobs by a decade earlier.

Now, the focus has switched to Co Limerick, with members saying the NPF is “anti-West of Ireland”, “anti-rural”, and saying it will “stymie” the county’s growth.

This is because the plan supports growth of towns with populations exceeding 10,000 people – the closest Limerick comes to that is Newcastle West, whose population numbers 6,619.

If the plan is adopted and observed – and this will be solely up to Mr Murphy and his Cabinet colleagues – it could potentially just mean the building of a handful of houses each year in Limerick’s county towns.

Seventeen homes a year would be proposed for Newcastle West, five each in Abbeyfeale and Castleconnell and just four a year in Kilmallock.

“If you think we have a housing crisis now, wait until you see what this is going to do to it,” warned Cllr James Collins, Fianna Fail.

Council boss Conn Murray added: “If the population cap is set out as applied, Limerick City and County Council would be required to dezone some land for residential accommodation. This would have serious implications, and it would be very difficult to stand over, especially in light of the current housing situation.”

With Minister of State and local TD Patrick O’Donovan in the public gallery during the meeting, local representatives left him in no doubt as to their feelings on the plan, with many of his Fine Gael colleagues turning fire on the government.

“It is a lopsided attempt at regional development. It’s lopsided in favour of the Cork region big-time. We need that addressed. The biggest problem we see is the percentages and caps on the growth of Limerick and its smaller towns,” said Cllr John Sheahan, the leader of the Fine Gael bloc.

Mayor Stephen Keary said we are seeing a “decimation” of rural Ireland”, Cllr Elenora Hogan said the plan is “a disaster for Limerick”, while Cllr Ger Mitchell, Hospital, asked Mr O’Donovan to take this message back to Custom House.

Cllr Sheahan urged all his fellow members, regardless of politicalparty to “wear the green and white of Limerick” and lobby the minister to change course.

They want to see all towns considered for the growth, the caps in population growth abolished. Until this happens, they want the plan to not proceed – and they want the backing of all Limerick’s national politicians.

Cllr Jerome Scanlan says the plan is “insane”, and criticised the limit of just 17 homes a year in Newcastle West.

”If you visit Newcastle West today, you can go to the Woodfield Estate and the Daar River View. If one counts up the homes under construction at the moment, it’s significantly in excess of 40,” he said.

Independent councillor John Gilligan said: “This plan borders on insanity. We have put land aside for building houses. We are told there is a national crisis in housing. Now we’re told we are limited in the amount of houses we can build in Limerick city or the contiguous towns which are under 10,000 people.

“I don’t think the people who have planned this have put any thought into it,” he stated.

Sinn Fein councillor Seamus Brown said if adopted, Ireland 2040 would send the country back to “the days of the Pale”.

“The cap in population is going to kill any business coming in. With the recent fabulous announcements we have had which will generate a load of jobs and bring people back, the first thing they’ll need is housing,” added Cllr Brigid Teefy, Independent.

Speaking to the Leader this Wednesday, Mr O’Donovan said: “No-one is suggesting areas be capped. This is not in the plan at all. I’ve read the plan cover to cover. An awful lot of what was said the other day is worry. It’s natural people are concerned, as this sets out a blueprint for the future of Ireland. I’d encourage people to read the document proposed by Eoghan Murphy and Damien English.”