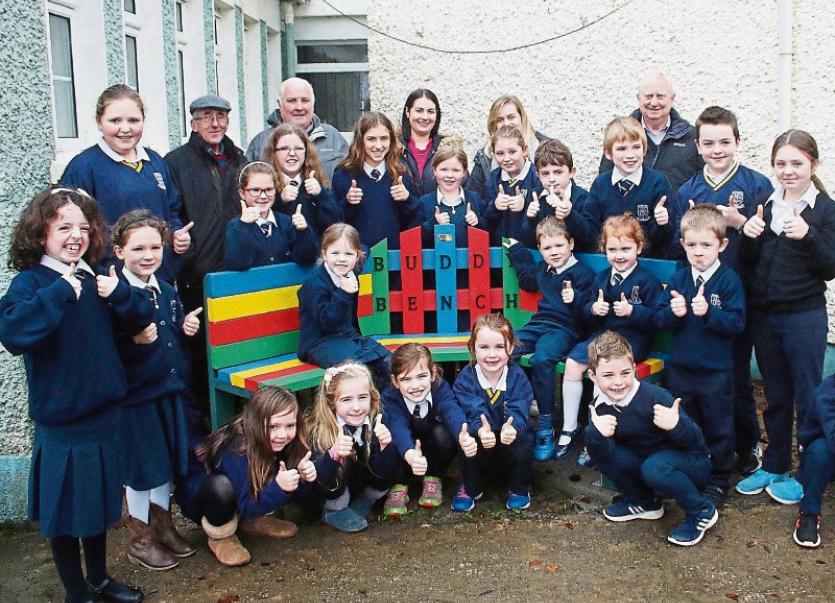 Castleconnell NS’s buddy bench gets a thumbs up from pupils, who came up with the idea

KIND-HEARTED children in Limerick's Castleconnell NS raised the money themselves for a colourful buddy bench.

Richie Ryan, principal, said the idea behind the bench is that children who are in need of a playmate or who are feeling sad or lonely sit on the bench at playtime.

“When other children see a child sitting on the bench they talk to the child and ask them to join in their game,” said Mr Ryan.

The bench was the brainchild of some of the pupils who are “after-schoolers” at a local crèche Sunny Lane. The children brought their idea of fundraising to purchase materials for the bench to crèche proprietor Anne McNamara, who gave her full support. She also matched the money they raised and contacted Mulcair Men’s shed to build the bench.

“I am very proud of my after-schoolers ranging from junior infants to sixth class who decided on a crèche quiz and a crazy hair day in order to raise the money required. They worked together as a group to advertise and organise the events in which all the crèche children and workers got involved in order to achieve our goal,” said Mrs McNamara.

Mr Ryan said: “The buddy bench is a fantastic addition to our school and something we had been hoping to put in place for a long time. A huge thank you to Sunny Lane crèche and Mulcair Men’s shed. We are very appreciative of their help in making this happen. Not only does it have a very important function but the workmanship is top class. It looks amazing.”

It empowers kids to foster friendships and overcome loneliness in the playground. It also encourages children to be more aware of anyone who may be feeling excluded and empowers them to respond.

“We are very proud of our pupils who made this happen completely on their own initiative. We recently set up a student council and these are the types of fantastic ideas the pupils are coming up with but more importantly they are taking responsibility for making them a reality,” said Mr Ryan.