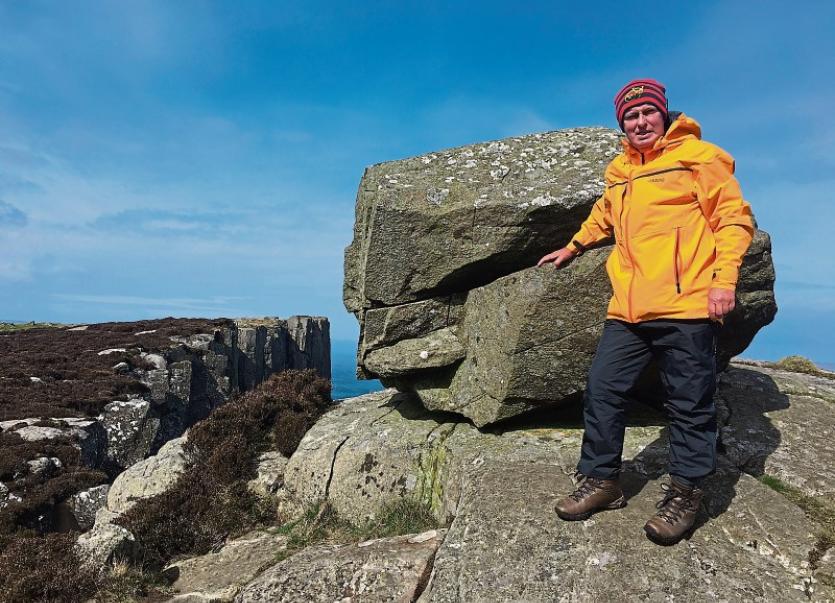 Dr Marty Holland, photographed at Fair Head in Antrim. Dr Holland recently retired from MIC. The 66-year-old is married to Noelle and is father of three daughters, Alice, Suzie and Laura

WHEN Dr Marty Holland’s two close friends passed away after a battle with cancer, he wanted to do something positive to help the services that helped them.

After a 30-year career at Mary Immaculate College, the Cratloe man had the time on his hands and the energy to take on a meaningful and challenging project in his retirement.

Thus he decided to walk the coast of the island of Ireland, and raise much-needed funds for the Irish Cancer Society and Friends of the Cancer Centre, which helped his late friends Michael O’Regan, from Monaleen, and Cratloe local John O’Reilly.

He said that he wanted to do something useful in tribute.

“Rather than being confronted by people passing away from cancer and doing nothing about it. I decided to get out there and do something positive,” he said.

The end result was a significant €60,000 fundraiser and a photographic 2018 calendar, featuring the most memorable sights along his coastal journey.

He completed the trek in two two-and-a-half month phases. Before the blistering winter cold set in last year, he hiked along the Leinster and Munster coast. He resumed his adventure in March, starting in Northern Ireland and concluding at the Flaggy Shore on June 18.

However, his main challenge was waking up in the morning and wondering where his bed was going to be that night. Fortunately for Dr Holland, he received “phenomenal support” along the 3,450km walk.

“I was couch-surfing, so people were putting me up as I went. And I was put up by the kindness of strangers, and after five months of walking, I wasn’t stuck once.

“There were some times when I would set out in the morning and I wouldn’t know where I was staying that night. So I didn’t have accommodation offered to me or organised. But I just believed in people’s decency that the support would come and it always did. I was never stuck,” he said.

After walking the brim of Connaught, Marty ended at the Flaggy Shore in Clare, where the family of Michael O’Regan and John O’Reilly showed up to do the final stretch alongside him.

“I got a big send-off and a big greeting. It was a nice and very fitting end to the whole thing,” he said this week. He said he was “delighted” to be back in the company of his family, who joined him on a number of days throughout the journey.

He said he hopes the €60,000 for the ICC and Friends of the Cancer Centre will contribute to their good cause, who provide night nurse facilities and supports for families.

Dr Hollan’s photographic calendar can be purchased at O’Mahony’s Bookstore, O’Sullivan’s Pharmacy, the EBS at Parkway, and the Irish Cancer Society Shop in the city.