Undie-cover research: Limerick farmer cottons on to soil testing with his underpants 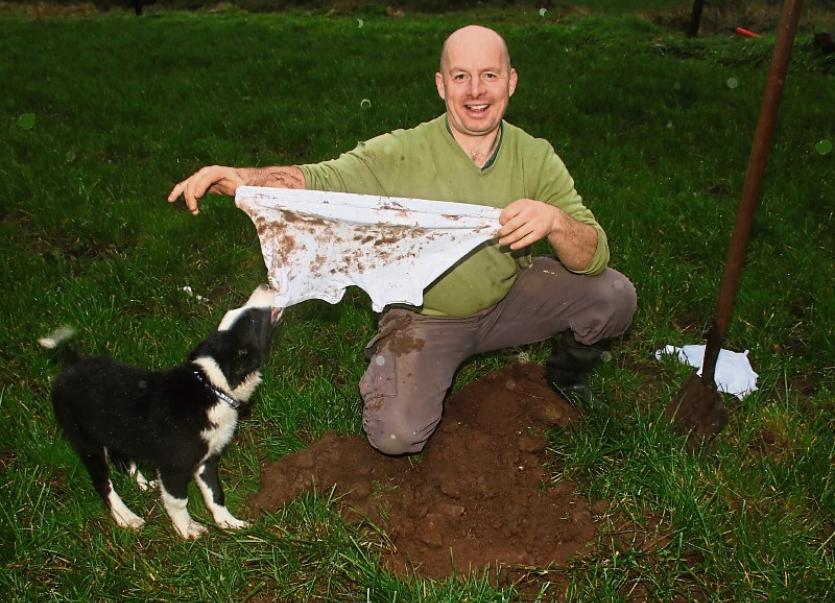 Getting to the bottom of soil testing: Paudie Ryan, Cappamore, buries his underwear - if his sheepdog Floss allows him to that is Picture: Michael Cowhey

A COUNTY Limerick farmer, who is always up for the craic, is burying his underpants in the interests of science.

This unique form of soil testing has been tried in Scotland, Canada and America so why not Ireland? There was only one man for the job and that was Paudie Ryan. The dairy farmer in Cullina, Cappamore, combines farming with entertaining on stage with the Rearcross Drama Group.

A number of years ago he created a character called Cllr Paudie in the midst of an election campaign and even erected signs.

The underpants burying trend has been reported in The Telegraph, BBC and ABC in recent weeks so when the Leader came calling, Paudie – the good sport that he is – had no problem stripping off.

The Agriculture and Horticulture Development Board in the UK are actually urging farmers to bury their cotton smalls in pastures to test soil quality.

The Department of Agriculture and Teagasc have yet to issue similar below the belt instructions.

“If, after two months, the underpants are exhumed intact, the soil is sterile and lifeless. If nothing but an elastic band remains it is thriving,” said the UK experts.

After doing his own research, Paudie says there is “method in their madness”.

“I have around 90 acres of variable land. It is actually very suitable for the experiment because some of it is very rich, free draining and productive, and other parts are more low-lying and less productive.

“The ground I put my undies in  outside my own house would be very productive and rich and free draining. There was an abundance of worms and other biological activity.

“Then in the low-lying area where I dug the hole it was pure saturated and no sign of life. It will be interesting to see if the experiment holds weight. I am hoping if it works they won’t be in a fit state to wear!” joked Paudie, who got married to Karen in September.

“She thinks I’m mad doing this but she knew that before she married me!” said Paudie, who was the Limerick region winner at the 2014 Dairygold Milk Quality Awards. The farmer in his mid-forties doesn’t take life too seriously.

“You need a bit of a streak in you and sure there is no harm having a laugh. We’ve just started rehearsing the latest Rearcross production – Run for your Wife. It is a demanding role but it is a hilarious play,” said Paudie, whose starring role is sure to put bums on seats in March.

Indeed, as Professor Gerry Boyle, Teagasc director, is a fellow cast member, Paudie can have a word in his ear about encouraging farmers to bury their Y-Fronts.