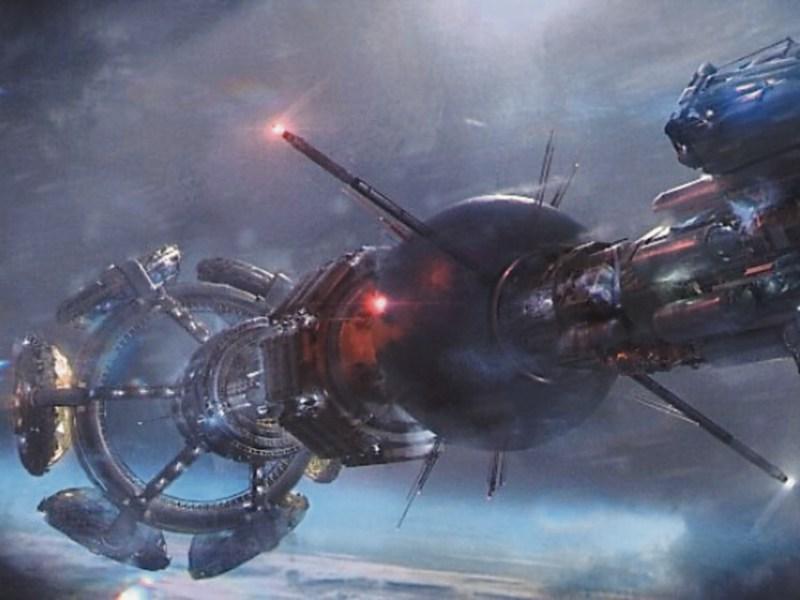 Concept art of the Nightflyers ship, which is gearing up to film at Troy Studios

GAME of Thrones author George RR Martin has said he would love to visit the set of Nightflyers, which is gearing up to shoot at Limerick’s Troy Studios.

The author, who wrote the novella that the big budget sci-fi show is based on, has also hinted at news of a casting for the Syfy/Netflix bound series, which he said has been given a “substantial budget”.

The Limerick Leader revealed last week that the Troy-based Nightflyers had skipped past pilot stage and moved straight to series, and Mr Martin has confirmed it has been picked up for ten episodes, which it is understood will start shooting early in the new year.

Construction on a huge set on one of the three soundstages at Troy is underway, with 50 construction craftsmen and women from Limerick and the wider region currently working there.

It is believed that the Limerick production will be the largest ever seen in the Republic of Ireland.

In a lengthy blog post, Mr Martin discussed Nightflyers and shared some concept art for the ship of the same name at the heart of the plot for the series and said it is to “be shot in the Republic of Ireland, I'm told, on sound stages in Limerick... which will give them access to the same great pool of Irish and British actors that Game of Thrones has tapped in Belfast (and considering how many characters we've killed, a lot of them should be available.

“If by some miracles I actually complete enough of my other projects to create some free time, I've love to go over there and kill two birds with one flight by visiting both the GOT and Nightflyers sets... but that remains a long shot, given my current word load,” he wrote.

“If all goes according to schedule, the series should debut this summer, in late July. It will be broadcast on SyFy in the USA, and on Netflix around the world,” he wrote of Nightflyers.

The series is set in the future on the eve of Earth’s destruction and follows a crew of explorers who journey on the most advanced ship in the galaxy, the Nightflyer. It is being executive produced by Doug Liman, who was previously behind box-office films including The Bourne Identity and Mr & Mrs Smith, who has said “it’s a big ambitious series and I think we’ll be in Ireland for many years”.

In his blog post, Mr Martin reveals that he met with writer/creator Jeff Buhler, who scripted the pilot, and showrunner Daniel Cerone, who will helm the series, and was “impressed by their enthusiasm and their plans”.

“I read a draft of his pilot back in May, when I first heard of the Nightflyers television project. While it departs considerably from my novella in certain details, the essence of the story remains the same – and I thought the teleplay was quite strong on its own terms, and a good launching point for a series.

“I was delighted to have the chance to sit down and talk with Jeff and Daniel, and learn more of their plans. Nightflyers was only a pilot script in May, but subsequently it has been picked up for a full ten-episode season order, with a substantial budget, one that should allow them to create a show that looks as good as modern audiences expect.

"They showed me drawings of some of the set designs, some very cool sets. They even showed me the Nightflyer herself:

“Presently Cerone and Buhler and their team are deep in the throes of pre-production and casting... and I have some news on the casting front as well, a casting that has pleased me more than I can possibly say, which I will save for another post,” he added.

There are currently six workshops in use at Troy, formerly the old Dell building in Castletroy, now a 350,000 square foot facility with three massive soundstages, one running to 30,800 sq ft and two at 18,000 sq ft.

Crucially, the height of the ‘high bay’ area in facility rises to about 60 feet, an almost unique element in this country - which is well covered with generous tax breaks to attract the eye of film and TV producers.

As well as the craftspeople working on the production, it is also sourcing a huge amount of raw material locally, from local suppliers, while about 14 engineering businesses in the Mid-West are also working directly with the production company.