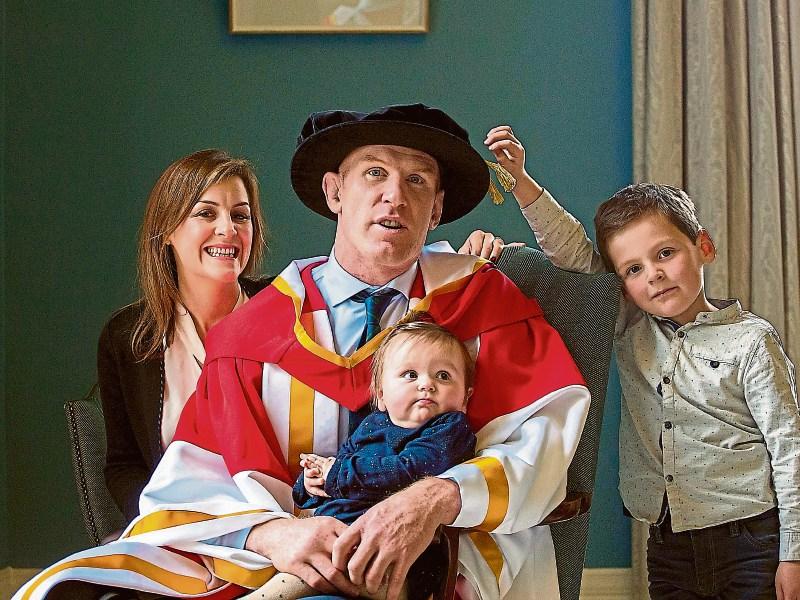 Paul and Emily pictured in UL in 2015 with Lola and Paddy, on the occasion of the rugby legend receiving an honorary doctorate Picture: Alan Place

The baby boy, named Felix, was born this Tuesday morning.

The retired Lions and Munster captain and his wife Emily O'Leary are said to be thrilled with their new arrival. The couple already have two children, Paddy, 7 and Lola, 3.

O’Connell, who is currently working as a BBC rugby pundit, was absent from the studios for New Zealand’s clash with Wales in the autumn internationals on Saturday evening having covered Scotland and New Zealand the previous Saturday and Wales’ clash with Australia prior to that game.

Paul is the youngest son of Michael and Shelagh O’Connell, of Drombanna. Emily is the daughter of Pat and Keave O’Leary, who live in Clarina.

He retired from rugby in early 2016 having amassed 108 caps for Ireland, 174 for Munster and seven for the British and Irish Lions.

The couple tied the knot at Sainte Marie Cathedral in the town of Auch – around an hour outside of the French rugby heartland of Toulouse – in July, 2013.