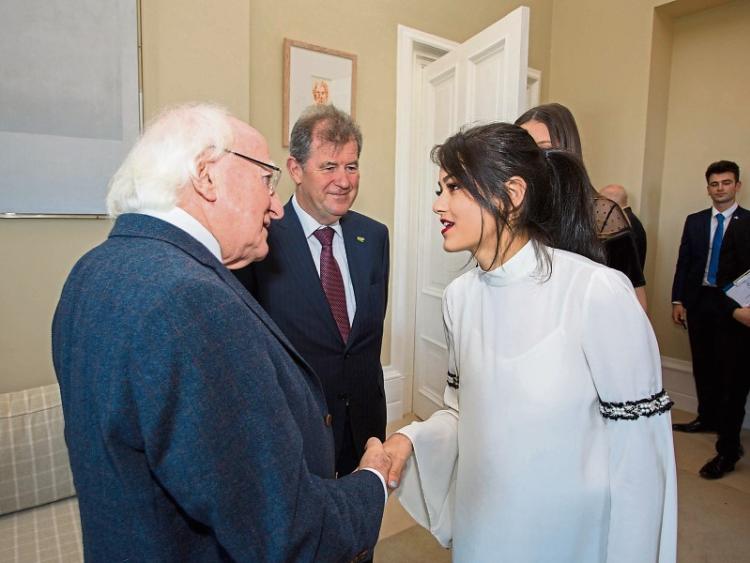 MORE THAN 100 of Ireland’s aspiring academics and leaders were commended for their hard work by President Michael D Higgins, at the annual All-Ireland Scholarship Awards at University of Limerick over the weekend.

Sponsored by billionaire philanthropist JP McManus, 125 Leaving Cert and A-Level graduates — including two Limerick students — were awarded scholarships worth €6,750 per annum at the ceremony at UL.

Grainne, who completed her Leaving Cert at Castletroy College, is now studying medicine at University College Cork. She was an award-winning team leader at the BT Young Scientist in 2013, and was highly commended for her project work at the Irish European Union Science Olympiad that year.

Emily Rose studied at Colaiste Ide agus Iosef, and is now studying physics at UL. Just last year, she won a silver medal for Ireland at the European Union Science Olympiad in Estonia.

Mr McManus congratulated the 125 recipients, adding that their “hard work and that of your teachers has paid off and my hope for you is that this award will help to progress you to the career of your choice and to further achievement and fulfilment”.

He said that he was delighted to welcome Minister of State Mary Mitchell O’Connor and permanent secretary, of the Northern Ireland department for the economy, Andrew McCormick.

He said that it was a “great honour and privilege” to welcome President Higgins at the event, adding that he has been “a long-standing advocate for the quality of education and the importance of independent and critical thought”.