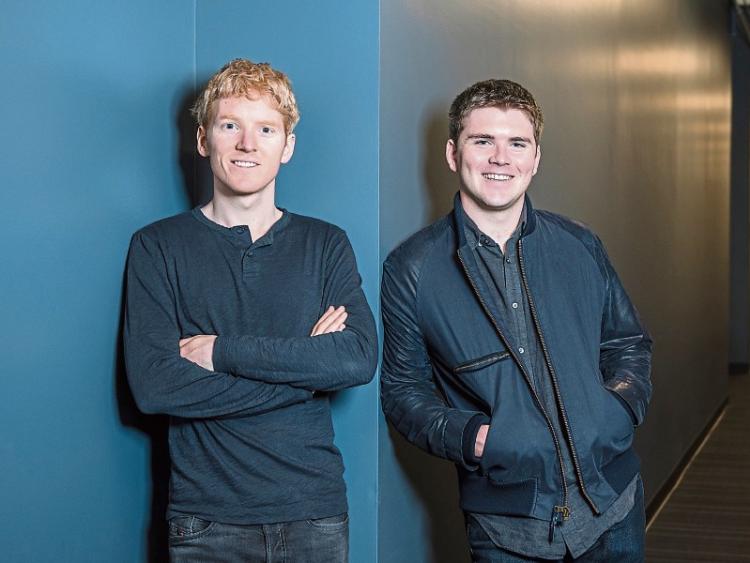 Patrick and John Collison: 'Mostly it [the billionaire thing] is just a calculator exercise'

JOHN Collison, the world's youngest self-made billionaire who hails from Limerick, has said the valuation of his wealth is "just a calculator exercise" and that he prefers running to any "elaborate new hobby, like Faberge egg collecting or yacht racing".

Speaking to the BBC website, Collison, 27 who went to school in Castletroy College, discussed the valuation of Stripe, the US-based software business that he co-founded with his brother Patrick, 29, who is the world's third youngest self-made billionaire.

The online payments firm run, founded in 2011, has more 100,000 customers worldwide and was valued at $9.2bn - €7.8 - last year after a funding round, meaning that the Limerick brothers are worth around $1.1bn, according to Forbes magazine, joining the ranks of the world’s richest as the youngest newcomer billionaires.

Asked about his billionaire status, John told the BBC: "People now ask this a lot and I feel like they always want some really interesting answer - and I have nothing for them.

"People ask 'how has your life changed?', and they want me to have taken up some elaborate new hobby, like Faberge egg collecting or yacht racing," he added, saying he preferred running, a "very practical, low maintenance hobby".

The San Francisco-headquartered Stripe extended its footprint into Hong Kong, having earlier established its operations in Singapore and Japan, in July following a roll-out to a further six European countries the previous month.

In Hong Kong, Stripe is partnered with WeChat Pay and Alipay, two digital services that dominate consumer spending in China, and which combined account for 92% of digital payments in China.

The two eldest, technological whizz-kids sons of Lily and Dennis Collison, Patrick was born in 1988, and John was born in 1990. John would attend the Centre for Talented Youth at DCU, where he studied laboratory medicine, maths and journalism from the age of seven.

In 2007, the brothers founded Shuppa, which later became Auctomatic, a software company that built tools for the eBay platform, which was later acquired for $5 million by the Canadian company Live Current Media, making them overnight millionaires at the age of 17 and 19.

In 2009, John finished secondary school at Castletroy College, receiving 8 A1s and 2 A2s grades in his Leaving Certificate. He commenced his studies at Harvard University but later dropped out - as did brother Patrick from MIT, when they got the technological itch, founding Stripe after seeing a gap in the online payments market.

Of that time and dropping out of college, John said: "It was obviously easier for me because Patrick had already done it, but we'd both developed a bit of wanderlust.

"I had considered the UK, but that wasn't far enough away, it wasn't wandering enough. And both of us were studious, so going to a top college in the US was always tempting.

"We came up with Stripe the way a lot of people come up with similar ideas - we were in the market for something like Stripe [that we could use].

"You might wonder what is hard about starting an [online] business. Creating a product that people actually want to buy, and getting them to hear about it, all that we could handle. But getting money from people over the internet was extremely difficult.

"I remember saying to Patrick 'how hard can it be? Maybe we should give it a try?'."

Stripe is now a company valued at $9.2 billion after an investment in Stripe from CapitalG and General Catalyst Partners. But the brothers remain both down to earth and confident about future growth.

"Only 5% of consumer spending globally currently happens online, and we want to help increase that," John told the BBC.

"Mostly it [the billionaire thing] is just a calculator exercise," explained John, who is president of Stripe.

"The valuation is predicated on us continuing to execute and launch very compelling products in a highly competitive space - so good signs, but still a lot to do."