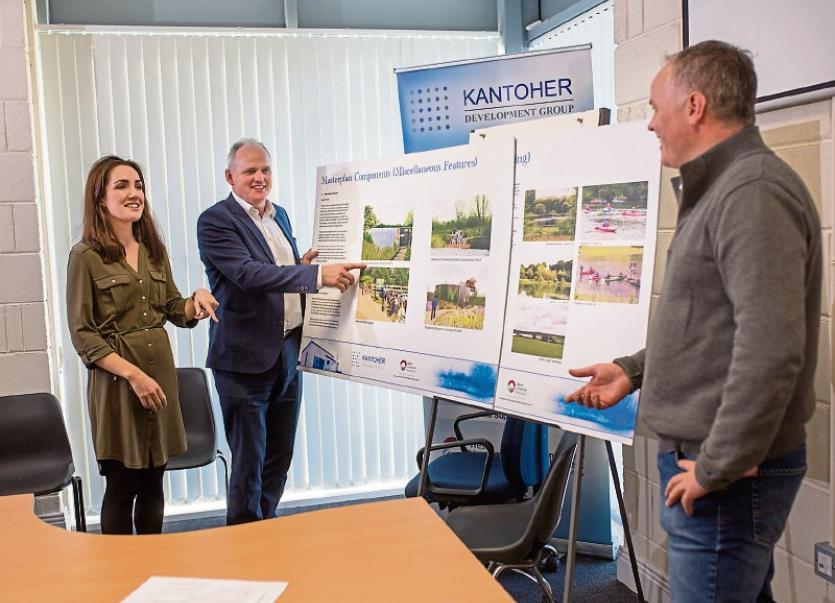 Patricia O’Sullivan, Jack O’Connor and Joe Kelleher, Kantoher Development Group, looking over plans for the innovative reed bed system that is being developed near Raheenagh

A BOLD scheme to attract industry into a small, rural parish in West Limerick will have the double outcome of providing a centre for water-sports, nature walks and a wildlife park for the community that has dreamt it up.

The reed-bed at Camas ponds is just another piece of a mini-revolution taking place in Killeedy, with its twin centres at Ashford and Raheenagh.

In Ashford, plans to develop a multi-purpose resource centre on the site of the old Ashford Tavern are gathering pace.

Already, six businesses, employing over 80 people, work out of the business park but the Kantoher Development Group (KDG) which is the driving force behind the park believes more can be achieved.

The reed-bed project is being constructed in the Camas ponds, originally developed for organic waste from the Kantoher poultry plant which closed in 2005. There are 13 acres of ponds or lagoons in all, which were held in trust for the people of Ashford and Raheenagh since then.

Now, Joe Kelleher, secretary of the Kantoher Community Group (KDG) explains, four acres including four ponds have been set aside for the reed-bed project, which has already attracted funding of €100,000 from the Town and Village Renewal Scheme.

But the remaining acres are going to be developed for community use.

The plan, Mr Kelleher says, is to develop three ponds for activities such as canoeing and a further two ponds are earmarked as a wildlife sanctuary. There will also be a network of walking trails through the complex, eventually linking in with the local sports complex.

The Environmental Park will act as an educational as well as a recreational amenity, Mr Kelleher explains, and both the local community as well as visitors will benefit. The hope is that it will attract tourists interested in wildlife or in activity holidays and help generate a number of start-up businesses catering for that.

The plan is to develop the project in stages, according to Jack O’Connor, a director of KDG.

Work has now finished on clearing the ponds and tenders will now be sought to do the next phase of the work.

“We have the funding to do the reed beds. The next stage is piping from the park to the ponds,” he said.

KDG, the project backers, also hope to link community facilities to the reed beds. Once the treatment plant is in place, the work on developing the amenity aspects  can then move ahead. But the hope is to have the reed bed project ready to operate by the end of next summer.