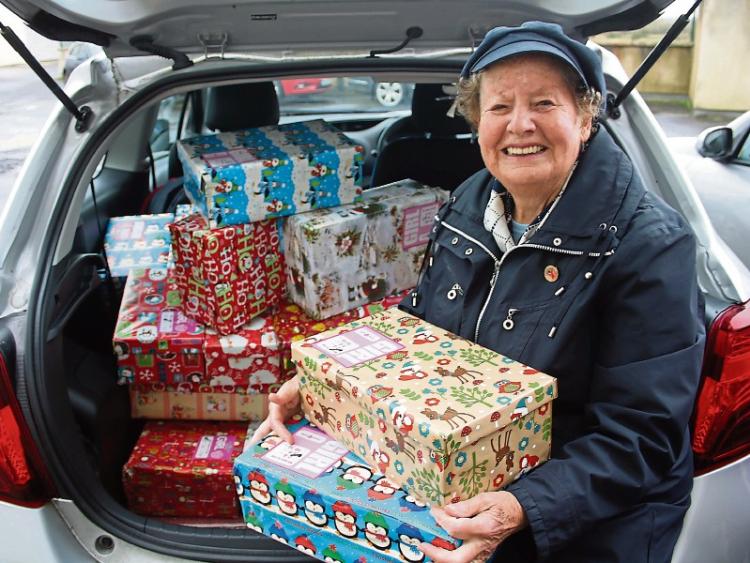 A heart of gold: Sigi Murrihy arriving at the depot in Limerick with some of the 214 shoeboxes she filled herself this year Picture: Michael Cowhey

SIGI Murrihy has somewhere to be every day. The Caherdavin woman does tai chi, art, swims twice a week and even teaches gymnastics for her Active Retirement group.

But having turned 80 last week, and with all of those hobbies on the go, she’s showing no signs of slowing down her year-round collecting of toys, clothes and knick-knacks. Her mind is always on her Christmas shoeboxes. This week, she dropped off 214 shoeboxes chock full of gifts for kids.

Sigi, originally from Freiburg in Germany, started filling Team Hope shoeboxes for poverty-stricken children around five years ago, inspired by her own childhood experiences in World War II.

“My town was bombed completely, on the 27th of November 1944, and I had just celebrated my seventh birthday,” she said.

“We got a bomb into the rubbish dump, luckily it was a small one, and when we came out from the cellar, we saw all the rubbish all over the trees. My dad thought it would be safer for us to leave the town. So my mam and I left the house and we went to a small little village to stay with some relations.

"I had to leave everything behind, I had no toys, nothing. I remember I was very lonely. One day, somebody gave me a little brown paper bag, and I opened it, and out came a little doll. For me, it was like heaven had opened. It was absolutely fantastic!”

She doesn’t know what happened to the doll, but the memory has always stuck.

When the war was over, the girl returned home to her father — “We were very lucky because we lived on the outskirts of the town, and the whole centre was completely bombed, there were thousands killed that night in Freiburg,” she explained.

A few years ago, Sigi was perusing a charity shop in Limerick city, when she spotted a little doll, “there looking at me”.

All of a sudden, she says, it clicked. “Wouldn’t that be nice now in a shoebox, to make some little child happy,” she thought to herself at the time.

“Because I remember how happy I was, and if my shoebox would only give half the joy to a child as what I had when I got that doll, I would be quite happy,” she said.

“I really enjoy doing them now as a hobby. I do it the whole year round. About once a week I go into town and I look around, I go to maybe 10 different shops. I try the charity shops, I try the pound shops, to see if I can pick up something. People are very good, they might give me a bit of a discount when I tell them it’s for the shoeboxes.

“I just love doing them, and every time I have a shoebox full, it gives me great satisfaction when I can look in and say, ‘God, I hope a child will be happy’.”

Like a lot of people who fill the shoeboxes, Sigi has a formula: a piece of clothing — “maybe a T-shirt or gloves and a scarf” — a “biggish toy”, a toothbrush and toothpaste, and “little cars or things like that” to fill it out. She is always on the hunt for soft toys, crayons, coloured pencils — “and when I put in pencils I always include a pencil sharpener and a rubber”.

“You could hardly walk into my front room with the boxes when I was filling them up!” she said.

Another person who knows what it’s like to have the sitting room taken over by shoeboxes is Cratloe woman Yvonne O’Donnell.

This year, the Mayo native handed over 56 boxes. She was moved to do them when she saw videos of the children opening the boxes, their eyes lighting up with joy.

“The cost of doing them is nothing compared to what our children get for Christmas, and it means so much to them. “You’d be surprised what you can get for a tenner. I keep my eye out all year for stuff, you’d see bargains in the summer for the winter stuff. And charity shops are great. You see them so excited over the littlest things, what we would call stocking fillers. And for them, it’s their entire Christmas. 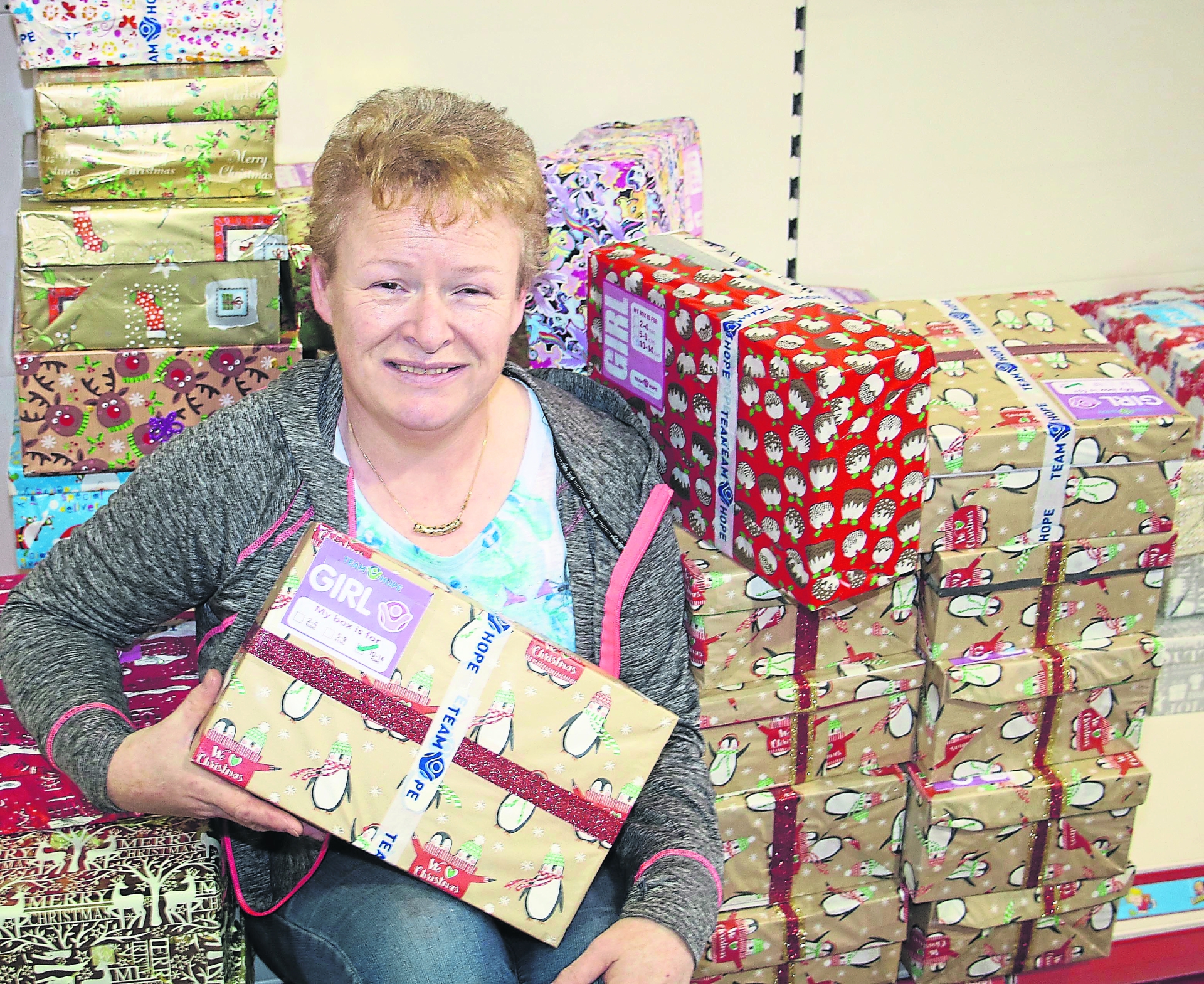 “This year was the first year I’ve helped out at the depot. They are doing Trojan work there, they pack out every box with extra bits and pieces that are dropped in, and every kid gets a great gift,” said Yvonne.

Perhaps one of the most difficult things to get ahold of are the boxes. Sigi gets them from local shoe shops, while Yvonne’s brother William O’Donnell brings strong boxes used for the safety shoes at work — Baxter in Castlebar — a pursuit which has led to him picking up the nickname ‘Willie the Shoe’.

Last year, a total of 9,683 boxes were sent from Limerick. 7,685 went to the Congo, which only received the boxes from Limerick, and the leftover boxes, almost 2,000, went to the Ukraine. There’s still time to drop off your shoebox at the depot on the Dublin Road (between Aldi and the Travelodge). The volunteers need to have the shoeboxes by this Monday or Tuesday. All boxes need to be checked before they are shipped on November 23. 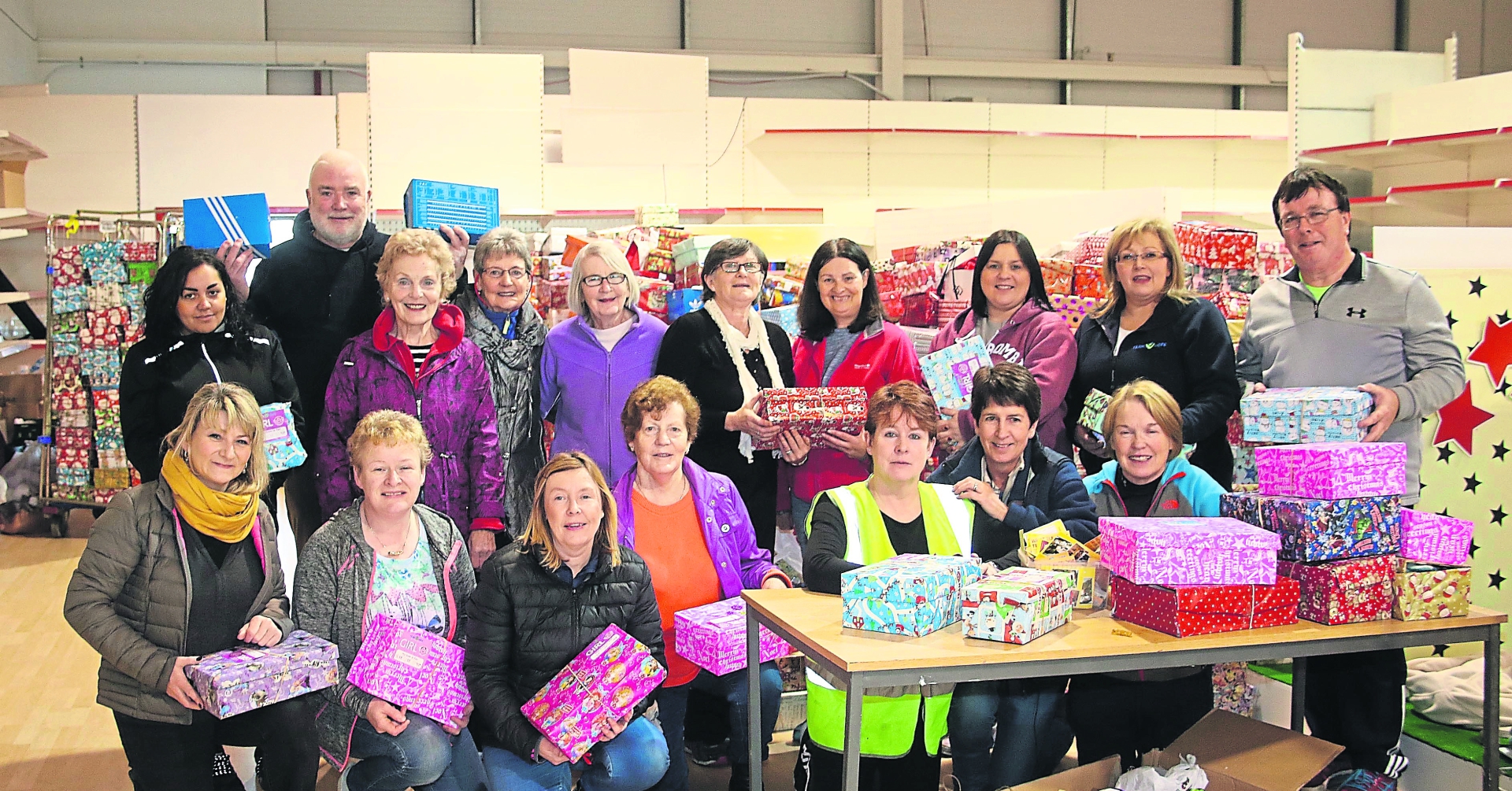