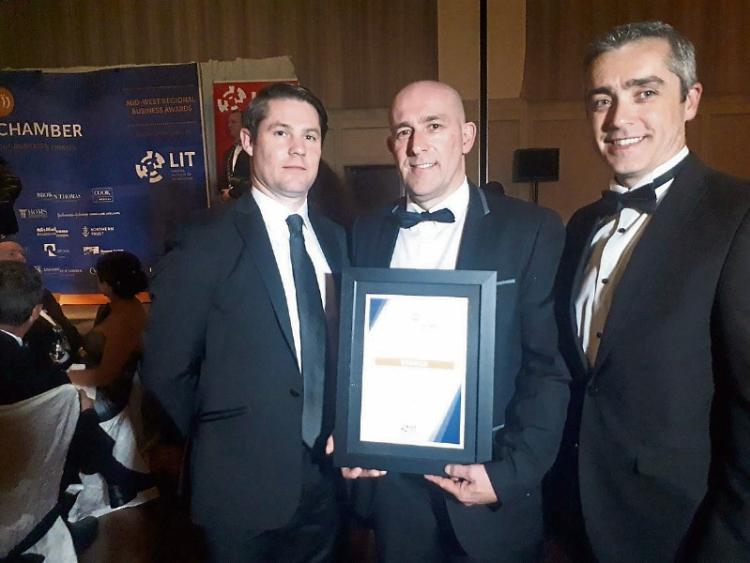 ROADBRIDGE has won the overall award for business at the year at the Limerick Chamber Regional Business Awards.

The Limerick-based building contractors specialising in roads, civil engineering and water waste management has been announced as the overall winner at the Limerick Chamber President’s Dinner in the Strand Hotel this Friday night.

Huge congratulations to @Roadbridge the company of the year at the @LimerickChamber business awards. #LimerickBizAwards pic.twitter.com/0C3x55kFAy

The annual awards dinner, sponsored by LIT – of which the Limerick Leader is a media partner – is being attended by over 400 of the region’s top business leaders and government officials and featured a keynote address by Niall Gibbons, CEO of Tourism Ireland.

The keynote speaker at the #LimerickBizawards @NiallGibbons of @TourismIreland. Highlighting the agency's work to attract new carriers into @ShannonAirport pic.twitter.com/YUmHWQXn5s

In addition to the other 11 business awards given out for special achievements at the dinner, a special President’s award was presented by President Ken Johnson to former finance minister Michael Noonan.

Limerick Chamber CEO, James Ring, said: “The competition extremely high this year, so every company that made the shortlist should be proud of its achievements. This year’s winners are a great example of the vibrant growing business community and excellent talent in our region.”

Presenting the award to Roadbridge, Limerick Chamber President Ken Johnson praised Roadbridge for its “innovative approach and continuous investment in its staff and services”.

“Roadbridge is a forward-looking company that has achieved significant growth through completing major projects in the transport, renewables and energy, utilities, commercial, industrial waste management and leisure sectors,” he said.

The full list of the 2017 Limerick Chamber Regional Business Awards winners is as follows:

2017 Best SME of the Year, sponsored by Bank of Ireland: Conack Construction