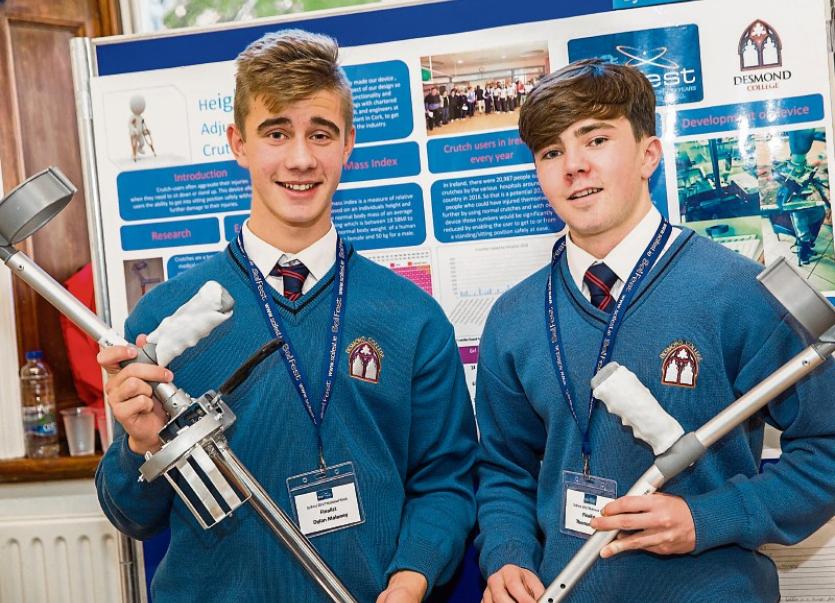 TWO students at Desmond College, Newcastle West have come up with an award-winning design for safer and more user-friendly crutches.

The prototype, invented and created by Thomas Curtin from Ardagh and Dylan Moloney from Newcastle West,  has now won them one of the top awards at the 10th national SciFest in Dublin and as part of their prize, they will represent Ireland in Germany next year.

But the duo now have high hopes their invention can be manufactured to help people recovering various leg injuries. And they are delighted that it has won the approval of doctors and physiotherapists.

The hydraulic crutch acts as shock absorber and helps reduce the impact on the arms, shoulders and back of the user. It also makes sitting down and getting up much safer as the crutch can be lowered by pulling on a lever, giving the user greater stability.

The beauty of it, says Dylan, is that “you don’t go down too fast”.

But the real value of the crutch lies in the fact that it could help reduce further accidents and injuries. As Thomas explains, almost 20% of people on crutches develop additional injuries.

The students’ creativity was ignited when Dylan got injured, following a bad tackle in a soccer match which saw him in plaster and on crutches for six weeks.

“Thomas was helping me get around the school. He could see I was struggling. The day I fell over getting off  the chair in class, we decided to come up with an idea to fix it,” said Dylan.

A lot of research and trial and error followed. But their prototype involved a gas-powered hydraulic section fitted to a regular crutch, allowing the crutch to be raised and lowered. The boys also developed a special handgrip which can be moulded to suit each user and can then be remoulded for the next user.

And to help the user, they attached a cup or bottle holder and a key magnet, making unlocking the door a safer process.

They also produced a simple instruction leaflet in several languages.

A huge bonus of  their invention, Thomas explains, is that the important, working part can be removed and reused time and time again, by being made part of regular crutches.

“We are now patent pending and  have started the patent process,” he adds. Their hope and objective is to develop their invention further and to make it commercially viable.

As part of their research, Thomas and Dylan met with medical and physiotherapy staff at Limerick University Hospital.

“They loved it. They want us to go back and give them more feedback,” Thomas explains.

Minister for Education and Skills, Richard Bruton, also loved their invention when he presented the students with their prize at the SciFest finals held in Dublin last week. Their project was one of 42 that made it to the national final and they were awarded the Berlin Long Night of Science Award as runners up.

They received a trophy and an all-expenses paid trip representing Ireland at the Long Night of Science event in Berlin next June.

She examined the effect of organic and non-organic fertiliser on populations of Dahhnia or common water fleas and concluded that organic was best.

Speaking at the award ceremony in Dublin, Minister Richard Bruton said: "SciFest is an excellent initiative that supports and enhances what we are trying to do at a government level and I am very impressed by the standard of projects displayed here today and the amount of work that students and of course, teachers and parents have put into each and every one,” the minister said at the prize-giving.