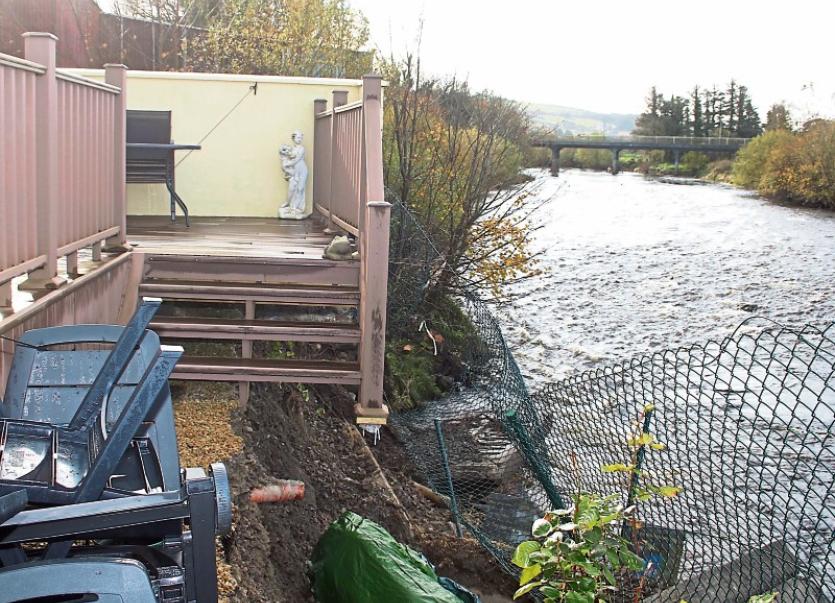 The rear of the Roches’ home where a section of decking now hangs in mid-air and below, Cllr Liam Galvin left with Eamon and Marie Roche and Padraig Twomey Pictures: Michael Cowhey

A HUGE chunk of a riverside garden terrace in Abbeyfeale was washed away by the river Feale last Sunday morning,  leaving sections of the terrace hanging in mid-air.

But even more ominously for home-owners  Eamon and Marie Roche, the poured concrete and rock armour protecting the rear of their home has been smashed or carried off by the river, following Saturday’s relentless rains.

In addition, a rear boundary wall and the decking outside the back door has been pulled away from the house.

Now, what Eamon and Marie Roche fear most is that the next time there is a high river following heavy rains, it will put the foundations of the house at risk.

Meanwhile, their neighbour Padraig Twomey has seen up to 15 feet of his back yard eroded and carried off by the river over the past three or four years while several feet under the concreted surface have been undermined and quarried out by the river. 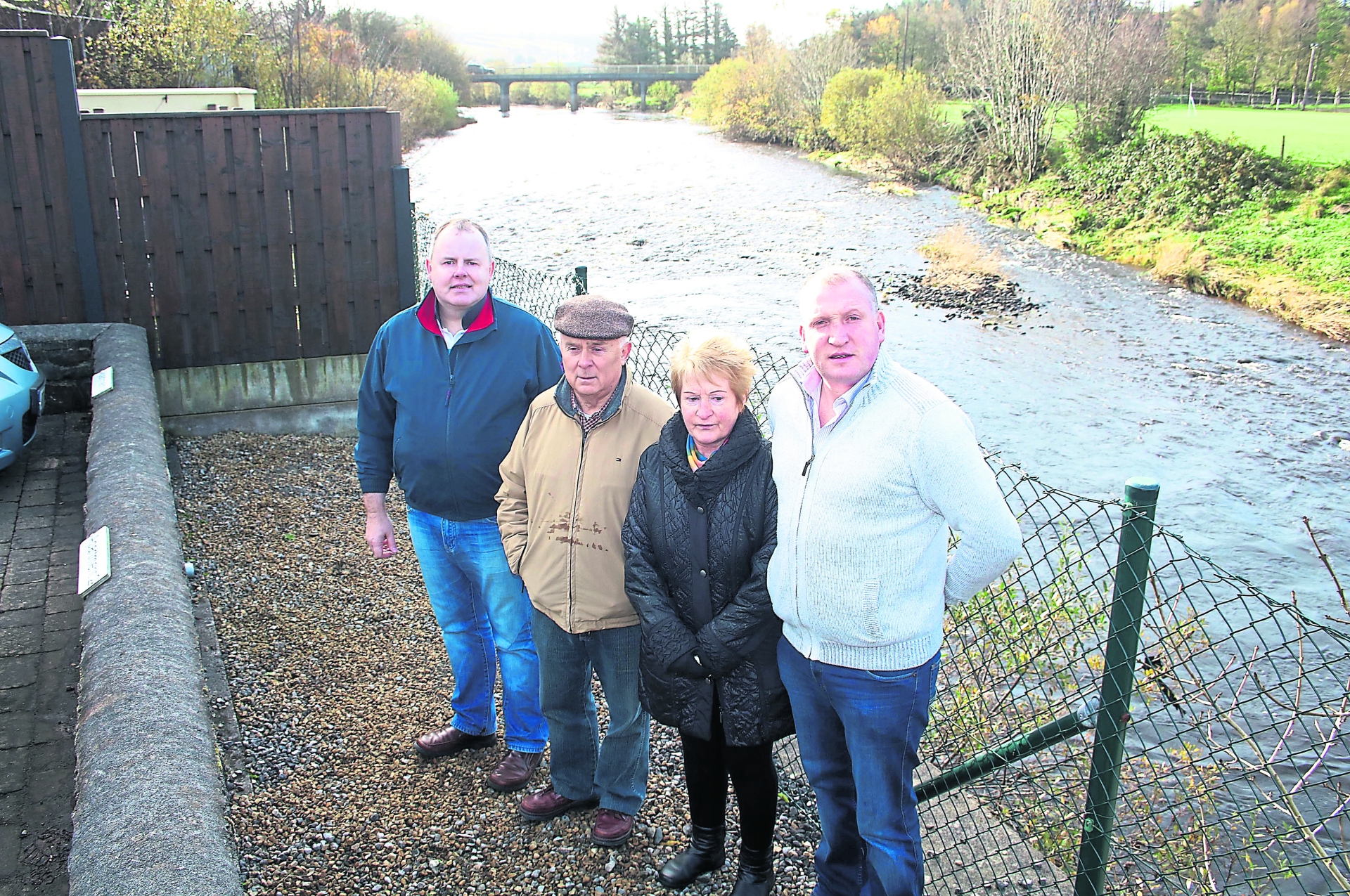 His oil tank is now sitting on concrete with very little beneath the concrete, he explained to the Limerick Leader, and the tank itself beginning to dip towards the river. Another flood could topple it altogether, he fears.

But, he said, he does not have the resources to begin to repair the damage to the riverbank. Neither do Eamon and Marie Roche who moved to Abbeyfeale about 12 years ago. The new house tucked away behind New Street was intended to be their dream, retirement home.

But that dream turned to nightmare last Sunday morning as Marie was sitting at her kitchen table with its double doors and window overlooking the Feale.

It was about 11am, she said, and she heard what she described as a loud bang.

A short while later, she was upstairs and her husband Eamon  was at the kitchen window when he shouted up to her: “We have a problem. We have a very serious problem.”

Their shock and dismay when they discovered the damage that lay beyond their back door was and remains profound.

They have had to visit their doctor and Marie is particularly worried about the effect on her husband who had a heart attack some years ago.

Cllr Liam Galvin, who visited both homes on Sunday, was horrified at what he found, particularly as it came just days after he had raised the issue of riverbank erosion behind New St at a meeting of the Newcastle West Municipal District.

But instead of hearing that some progress had been made on the matter, he was told that it was a matter for the property owners and that there was no funding forthcoming from the OPW.

“I will not let it go,” Cllr Galvin warned at the time, arguing that erosion prevention work had been carried out on another house at the end of New St, adjoining a tributary of the Feale.

He now believes the same must happen at New Street and it must be done urgently if the homes of the Roches and Mr Twomey are to be safeguarded.

The state must step in, said the councillor who has previously argued there should be one state agency with responsibility for rivers, streams and lakes.

“We are trying to exert as much pressure as possible to establish who is responsible for the river and that they take responsibility very quickly to protect the properties under threat,” he said.

“I don’t believe that is going to cost a six-figure sum either.”