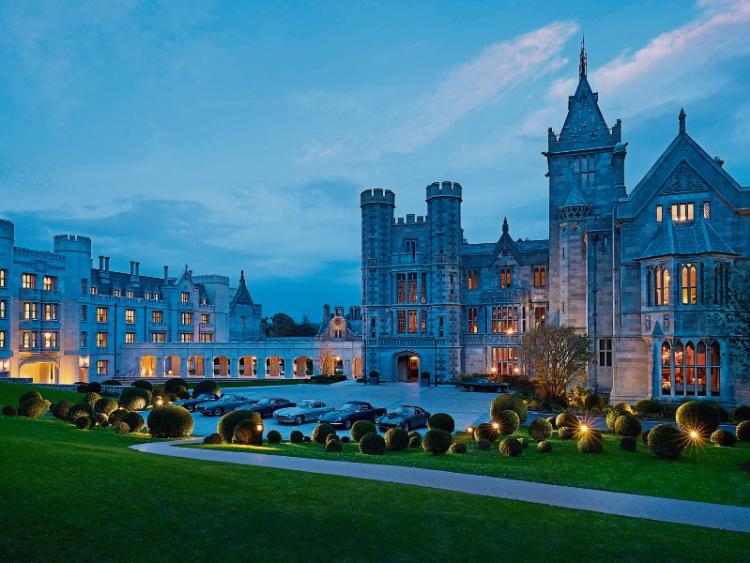 ADARE Manor reopened this Thursday after an 18 month renovation programme which will make the Limerick hotel one of the most exclusive, expensive and most sought-after venues in the country, employing 350 people in the process.

While the hotel package at Adare starts at €195 per person, the team at Adare has seen incredible demand with 35 weddings already booked in, including a number before Christmas.

A minimum requirement of 25 Manor rooms must be reserved on the night of the wedding, with rooms starting at €325.

The new Adare Manor boasts a stunning grand ballroom featuring a sweeping staircase, marble floors and crystal chandeliers, which can cater for 350 guests and which looks out onto the river Maigue.

It sits beside the original manor building and the new 42-bedroom wing bringing the total number of rooms to 104 bedrooms.

Already the Dunraven Arms and the Woodlands House Hotel are doing massive wedding business, and the reopening of the Manor will be a huge boost to business in the area, including pubs and shops in the picturesque village.

RTE’s Nationwide featured a full programme on Adare and the Manor this week, including impressive drone shots from Matthew Kelly, the Limerick camerman who has been working with the programme for many years.

A number of celebrities have been tweeting and raving on social media about the new-look Manor with photographs  of golfers Shane Lowry, Padraig Harrington and Paul McGinley; and rugby stars Paul O’Connell and CJ Stander and his wife Jean-Marié being posted.

Numerous faces from the racing and business world, along with Andrea Corr and Celia Holman Lee have also also be snapped at the Manor.

Paul O’Connell, a keen golfer, featured his son Paddy on Instagram who was delighted to get a lesson with Padraig Harrington at the driving range.

The golf course is not due to open until late March. It is in line to host the Ryder Cup in 2026. Golfers have to pay €340 a round during the peak summer season on top of €60 for cart hire and €55 for a caddy.

“It’s reminds me of a sad old diamond that has gotten such a shine up that it’s now a diamond shining in the sky. The new part is spectacular - the ballroom is like something from an old movie. You could imagine Cinderella walking down the magnificent staircase,” said Celia Holman Lee who visited the Manor last weekend.

The major refurbishment and construction works also included upgrading and completely restoring all internal and external finishes, furniture and woodwork, and repairing all external stonework, windows and doors.

The entire roof has been removed, fully repaired and put back in place.  A complete upgrade to all mechanical and electrical services has been undertaken including the introduction of a new heating and cooling system for all guest rooms.

The price list, from afternoon tea to golf at Adare

Adare is luxury personified, and if you want to enjoy the treats at the Manor, read on as we have the prices for all the main treats.

First things first, despite much exaggerated suggestions, the price of the pint of Guinness is  €5.90 and Heineken €6.50. A bottle of wine starts at around €35.

A beauty treatment in the La Mer spa, pool and relaxation area will be a must for many. The La Mer facial, which takes 75 minutes, is €210 and €240 for 90 minutes. You might encourage your loved one to try the hot stone treatment instead at €140.

Contrary to much public perception the Manor is very much open to the public for events like afternoon tea at €45, or dinner, with a 5 course tasting at €110, and lunch.

Rooms at Adare Manor start at €325. This is complete luxury with a massive bed; massive TV with all channels; comfortable seating for business or reading. You can also have the Signature Suite for €1,995 a night.

A new Adare Manor website went live this Thursday with all offers. The Manor will be open at Christmas with plenty of activities for all the family including a chauffeur to bring you to church on Christmas Eve or Christmas Day.

Anyone who plays golf will want to play the newly designed course which is in line to be a Ryder Cup venue. It is not cheap, in fact, green fees are currently the most expensive in Ireland starting at €340 before you get your caddy and caddy car.

The new ballroom at the Manor is absolutely magnificent and blends in perfectly with the 19th century manor. Weddings start at €195 per person.

Guests at the Manor can take part in activities such as falconry, cycling, archery, and fishing.

There is also a cinema with all the latest movies.

Colm Hannon is chief executive at Adare, with Paul Heery, general manager and Anita Higgins taking up the role of business development manager at the five-star resort.