Presidential advice at MIC Limerick graduations: 'Be kind to yourself' 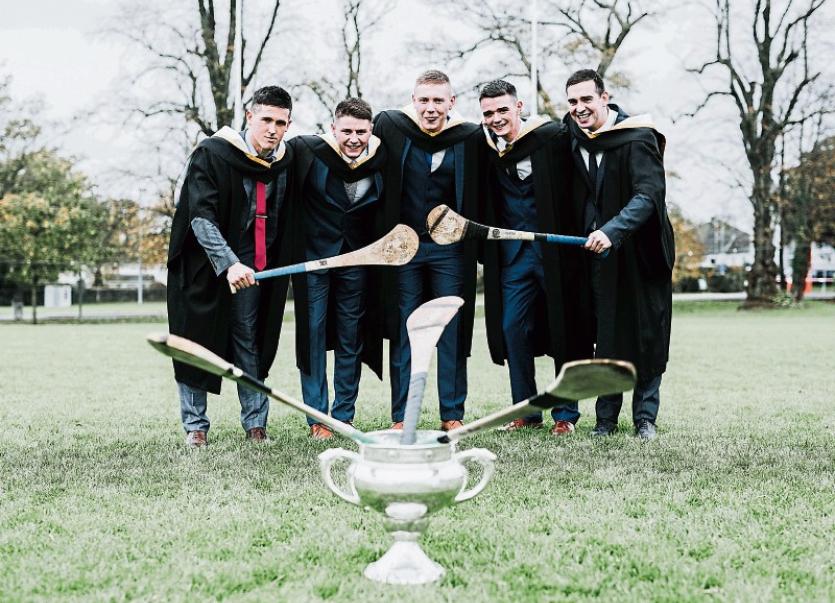 Members of the victorious Fitzgibbon Cup Team at the grads this week Picture: Brian Arthur

IT WAS one of the biggest conferring ceremonies that Mary Immaculate College had ever seen, featuring almost 2,000 graduates from 30 Irish counties.

And there were several firsts for the Limerick college at the three-day event, including the graduation of the first cohort of students in the Leadership for Inclusion in the early Years (LINC) programme, which is run in partnership with Early Childhood Ireland and Maynooth University.

The first graduates from the Graduate Certificate in Autism Studies (in partnership with Middletown Centre for Autism), were also conferred.

Bringing the ceremonies to a close, Professor Eugene Wall, acting president of MIC offered sage advice about the road ahead to the new graduates.

“Be kind to yourself and do not judge yourself too harshly… and extend the same tolerance and understanding to others who are travelling on the same journey.

“Recognise and fend off those who radiate negativity — and those whose coping mechanisms express themselves through cynicism and constantly criticising others. Tend the inner voices of hopefulness and optimism, however delicate their call,” he said.

“Above all, never allow your sense of hope to be extinguished.”

Almost 300 Limerick students graduated, and many were presented with awards for their hard work and dedication over the course of their studies.

Sarah Clancy, Ballingarry, and Barry Finnegan, Dooradoyle, were awarded College Gold Medals for achieving first place in the BA in Liberal Arts. Sarah was also the recipient of the French Embassy Prize for making the greatest progress in French over the course of her undergraduate studies.

Robert Moloney, from Limerick city, was presented with the Saint Bonaventure Trust Prize for the BA.

Coonagh native Amy O’Donoghue was presented with the Outstanding Achievement Award in recognition of her excellence on track and field.  A primary teaching graduate, Amy is one of the country’s greatest young talents in athletics.

After a glittering underage and schools career, the middle distance runner has maintained her steady progress up the ladder of success. Representing UL, the MIC student has won the IUAA national 1500m title twice (in 2015 and 2017) setting a record on both occasions.

And having dominated middle distance running at the national U-23 championships for three years (2014, 2015 and 2016) she remains as competitive as ever, moving into senior ranks.

Bishop Brendan Leahy, chairman of An tÚdarás Rialaithe, MIC, said: “As you set out, may you be blessed in every way, especially with the hope that your life can make a unique difference in our world, that you will make hope and history rhyme as you write with your life the history lessons of the future.”

Tributes were paid to the late Professor Michael Hayes, former president of MIC (2011-2017) who passed away earlier this year.

UL president, Professor Des Fitzgerald, said: “While his loss is great, his legacy to this institution and to education in Ireland is a strong and lasting one.”