Campaign to stop dumping at Limerick beauty spot picks up 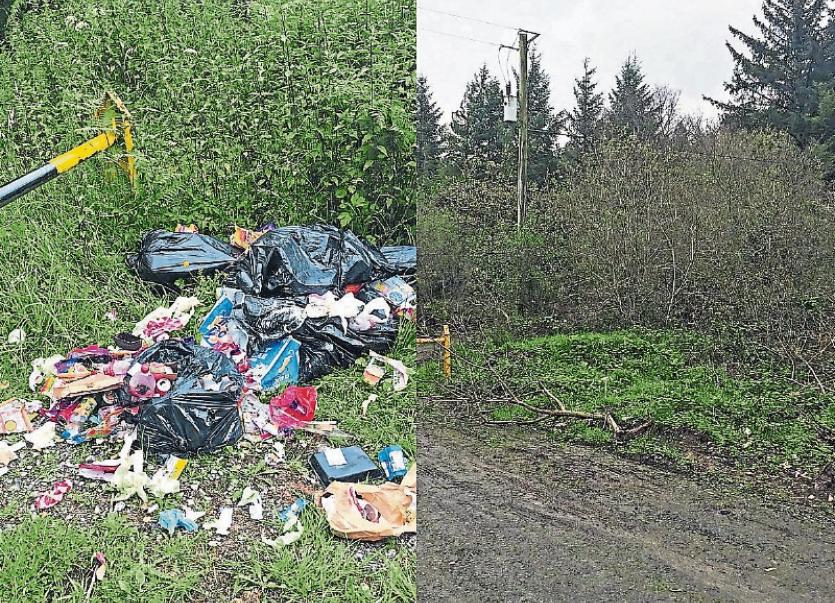 Before and after: The location one km up the hill from Glenstal Abbey, near the main entrance to the Slieve Felim forests Photo caption

A STOP dumping campaign set up by an internationally acclaimed writer and journalist has helped return a Limerick beauty spot to its former glory.

Sadhbh Walshe said her family have lived in Murroe for nearly 30 years. She returns as often as she can from New York as she finds the peace, quiet, natural beauty and walks through the Slieve Felim forests “wonderful for her writing”.

However, last July she was so disgusted by the amount of household rubbish scattered around she said, “When I encounter the trash dumps, however, to say it is a buzzkill is an underestimation. I want to get on the next plane out of here. The Limerick council should not allow a small group of people to destroy an area beloved by many.’

“I'm done with the outrage at this stage, we need action and that means closed circuit cameras being installed immediately and perpetrators being prosecuted. It is unfair and unrealistic to expect locals to keep tackling this problem alone. The simple truth is that as soon as we clean up one dump, another more offensive one replaces it,” said Sadhbh, who set up a Twitter handle and Facebook page entitled Stop Dumping around Murroe/Glenstal.

It reads: “Help us stop illegal dumping around Murroe by sending photos and any evidence of dumping sites to StopDumpingMurroe@gmail.com. We will forward all complaints to Limerick council.”

This week she tweeted the same locations, now rubbish free and thanked the council.

“Thanks in large part to the efforts of @stopdumping, a beautiful country road that was destroyed by rubbish has now been restored to its natural state. This is a welcome development, however, it took nearly three months from the time the violation was reported for any action to be taken.

“And as no preventative measures have been implemented by the council - such as installing cameras in dumping hotspots - the area could be destroyed again overnight.

"Nonetheless, all potential dumpers should be aware that the local community around Murroe is on alert regarding any suspicious activity - unknown vans driving into secluded areas and so on - and any future dumps in this area will be investigated and reported.”