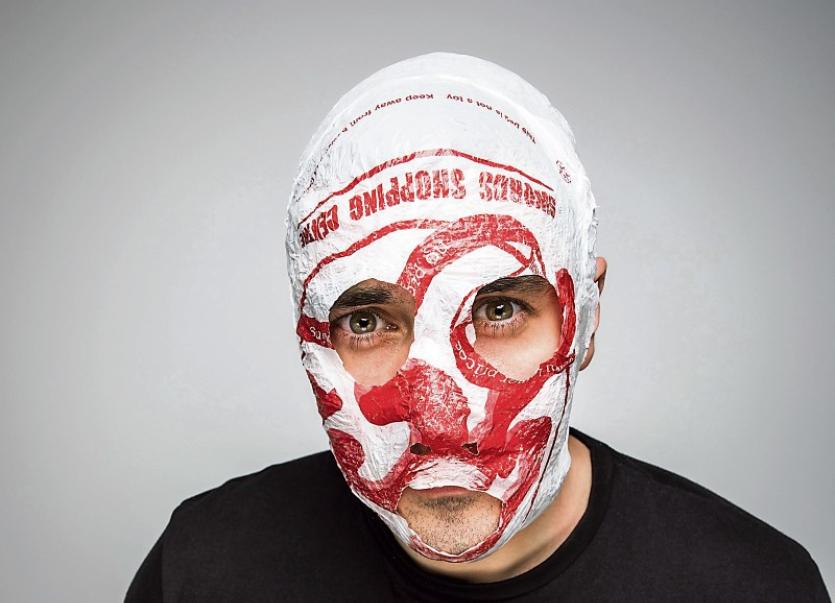 The Gospel According to Blindboy: The Limerick man’s book hits the shelves this Friday

ALMOST seven years on since Horse Outside was released, causing a sensation, one half of the Rubberbandits is now gearing up to take the literary world by storm with a new book.

The Gospel According to Blindboy In 15 Short Stories gets a release this Friday and the Limerick man’s writing has been compared to that of his compatriot Kevin Barry, his idol Flann O’Brien and avowed ‘Bandits fan Irvine Welsh.

In a flow of consciousness style that Barry would approve of, the erudite and darkly lyrical Blindboy Boatclub has produced a piece of satire from the recesses of his mind that was written in coffee shops and bars around Limerick and on trips abroad to Spain.

His regular social media updates on the book’s progress might have caused eyebrows to rise and the content of some of the stories will do the same; Eamon de Valera being impregnated by Michael Collins just being one. It is a wry and caustic look at Ireland and the wider world and the surreal collection of short stories is littered with familiar landmarks and haunts from Limerick - Donkey Ford’s among them.

Those familiar with the lyrical content of the Bandits’ songs will not be shocked - indeed this is satire at its most perverse, viewed through the lens of one of the country’s foremost spokesperson for issues affecting his generation. There is a story about a girl from Tipperary being kicked out of ISIS, a van powered by Cork people’s accents and a man who drags a fridge on his back through Limerick, just to mention a few.

Danny Boyle, who used The Rubberbandits’ song Dad’s Best Friend in the Trainspotting sequel, called the book “essential, funny and disturbing”, while Blindboy collaborator Russell Brand has hailed it as “warped genius”.

In an interview with the Limerick Leader, Blindboy said the collection of stories came about after he was “approached about writing a book full of essays on society and culture.

“We’d been offered book deals before, but they were shitty offers, kind of money grabbing, coffee table book suggestions. ‘The Rubberbandits guide to keeping your Horse Outside’ type of stuff. Novelty books to fill stockings and get thrown into the back of the wardrobe come January.

“When Gill (the publisher) asked about a book of essays, my ears pricked up, because I knew they were serious about commissioning a book that people would actually read. Not just a throwaway novelty money grabber. I’m pure particular about creative integrity, I only ever want to make something that I myself would buy if I wasn’t me, in whatever we do.

One story, Did you read about Erskine Fogarty?, is set in Limerick in 2008 amid the recession, he explained. It forms part of Blindboy’s first podcast and you can hear him read the story himself, as a quiet, slightly unsettling, piece of music heartbeats in the background.

Asked how much of the book was inspired by his native city, Blindboy said: “Everything I do is inspired by Limerick.

“The humour and language of the city is very literary by its nature. I'm a huge fan of James Joyce. The way he used the lyricism of the Dublin accent to write prose is gorgeous. I suppose I wanted to implement a similar technique with the Limerick accent. We’re very lucky in Ireland to speak Hiberno English. The English we speak is this mad mix of traditional English and Gaelic grammar. It’s fluid, and surreal, it’s open for creativity and humour. Every Irish person has a natural advantage when it comes to the written word.”

Blindboy, no stranger to controversy and who caused a recent stir when referring to ‘haunted bread’ on the Late Late Show, denied the title for his book was a satirical nod to that incident.

“Not really, that name just sounded right. I love the phrase ‘The Gospel Truth’ as if the Bible is a truthful account of history. It’s a pure oxymoron. My book is the gospel, because it’s nothing but lies, it’s all fiction,” he said.

“Sure there’s a story about a lad from Ennis who tries to break into a weed growhouse above a takeaway and gets abducted and sent to Hong Kong where he’s transformed into an octopus sex robot. That would never happen,” he laughed.

The other half of the Rubberbandits Mr Chrome has, Blindboy outlined, been “pure supportive”.

“His thing over the past few years has been performing on stage. That’s where he shines, dancing and singing. He wouldn't have much interest in writing a book.”

Blindboy says he intends to keep donning the plastic mask for “years to come”.

“Yeah, 100%. I'm going to be wearing this bag for as long as I live. This is a lifelong artistic project for me, that I started when I was only about 15. I want it to grow and evolve in mad directions. It’s too late for me to turn back now."