WATCH: Troops parade through Limerick ahead of Lebanon peacekeeping mission 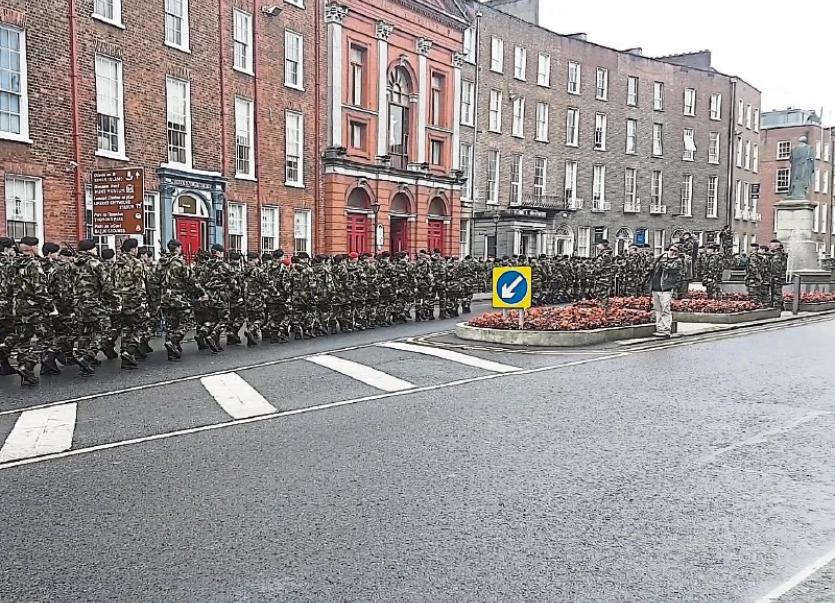 MORE than 300 Irish troops took to the streets of Limerick today to parade as the 111th Infantry Battalion, ahead of their journey to Lebanon for a peacekeeping mission.

A review of the soldiers, who hail from all over Ireland, took place in the courtyard at Sarsfield Barracks this Thursday morning.

Proud family members looked on as their sons and daughters, husbands and wives, brothers and sisters were inspected and wished good fortune on their six month mission overseas.

The troops will spend six months in South Lebanon as part of the United Nations Interim Force in Lebanon (UNIFIL).

Lieutenant Colonel Neil Nolan, Officer Commanding the battalion, said that it was a “privilege and an honour” to be appointed.

“This is part of a combined infantry battalion with Finland and Estonia. Ireland is currently the lead nation for this battalion,” said Lieut Col Nolan.

“A key enabler to the success of our mission is the continued support provided by our families and loved ones at home,” he added.

The main contributing unit for the Irish group is the 12th Infantry Battalion, based in Limerick’s Sarsfield Barracks. More than 100 soldiers from the Limerick unit will go on the tour of duty.

111th Infantry Batallion: Mayor @stephenkeary views the parade ahead of deployment to South Lebanon as part of UNIFIL pic.twitter.com/CFuCXppSL7

After the unit formed up at the barracks, they performed a ceremonial ‘march past’ from O’Connell Avenue to Prospect Hill, via Mallow Street. They were followed by mammoth green military vehicles and a white UN truck.

Good luck is the message from these Limerick children, ahead of this UN mission @Limerick_Leader pic.twitter.com/FUPQY4K5Ws

The children at Limerick School Project lined the street to cheer on the soldiers as they passed, waving dozens of Irish flags and holding a sign proclaiming ‘peace for all’.

These kids from Limerick School Project cheering on @defenceforces about to embark on UN peacekeeping mission to Lebanon @Limerick_Leader pic.twitter.com/mAVwLXyQvC

The soldiers will be working to make sure the community remains safe for civilians in South Lebanon, and will be reunited with their families next May.

More cheers this morning for the 111th pic.twitter.com/ap29yLe7u1