Chess group square up to Limerick tournament amid accusations of 'discrimination' 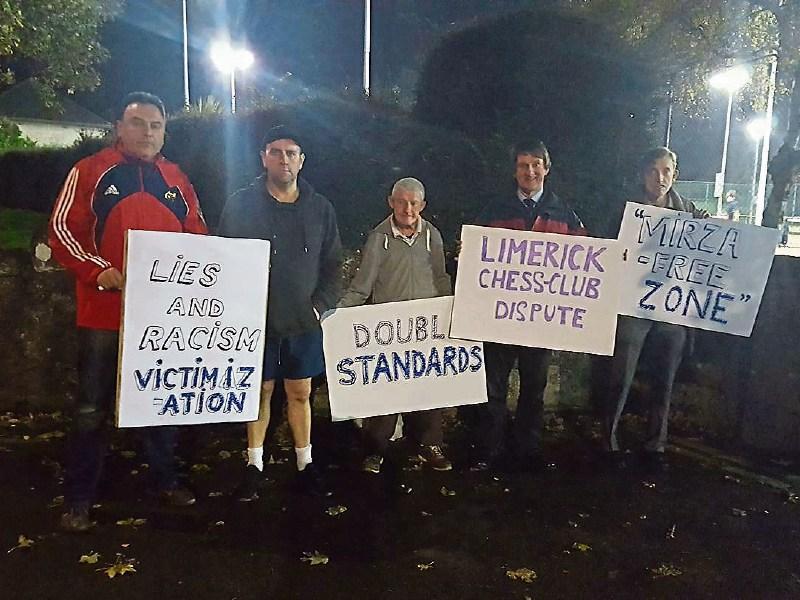 Gabriel Mirza, left, John Alfred, second from right with Sean Phillips on the end at the protest on Thursday night

THE normal tranquil world of chess has been thrown into disarray after a protest demanded justice for a player banned from taking part in this weekend’s Limerick Open tournament.

A number of well known players picketed outside the Limerick Chess club base on the Ennis Road last night, demanding fair play for a player who says he has been “discriminated” against.

Leading the protest was John Alfred from Adare, know as Mr Chess in Limerick, who is one of the few people in Ireland to make a full time living from the game, which he teaches in local schools.

Gabriel Mirza, father of Diana, who recently won the World Under 17 Chess championship, has been banned from numerous tournaments since he was involved in a much publicised incident in Cork in 2013, where gardai were called to a tournament after Mr Mirza claimed his then 16-year-old opponent was cheating.

He alleged that the boy went to the toilet at least 20 times during the game. Mr Mirza then got the controller of the event and they went to investigate. Mr Mirza entered the cubicle next to the boy and saw him using a computer tablet to get moves from a chess engine.

Gabriel was on his way to winning the Cork Congress Chess Open and a prize of €400 - the second biggest in the country - when he noticed strange goings-on by his opponent, who was from a well known Dublin school.

Mr Mirza says that cheating in chess is ruining the game but alleges the Irish Chess Union has been discriminating against him since the events in Cork.

John Alfred and others agree with Gabriel, who lives in Raheen.

“He has been discriminated against and has been banned for no reason from at least seven tournaments. It is totally wrong and goes back to the incident in Cork where he highlighted cheating,” said Mr Alfred.

“We got a great response to the picket last night and will probably picket the Limerick Open at the weekend. When Gabriel asked why he has been banned he was not given a reason, just told you know the reasons, it is completely wrong,” added Mr Alfred.

The organisers of the Limerick Open have been contacted for comment, but have yet to respond.

Mr Alfred also pointed out that the reason they picked outside Limerick Lawn Tennis Club on Wednesday night was because Limerick Chess Club is based there, it was nothing to do with the tennis club.

Plans are now in motion to picket at the Kilmurry Lodge this weekend, the group added.