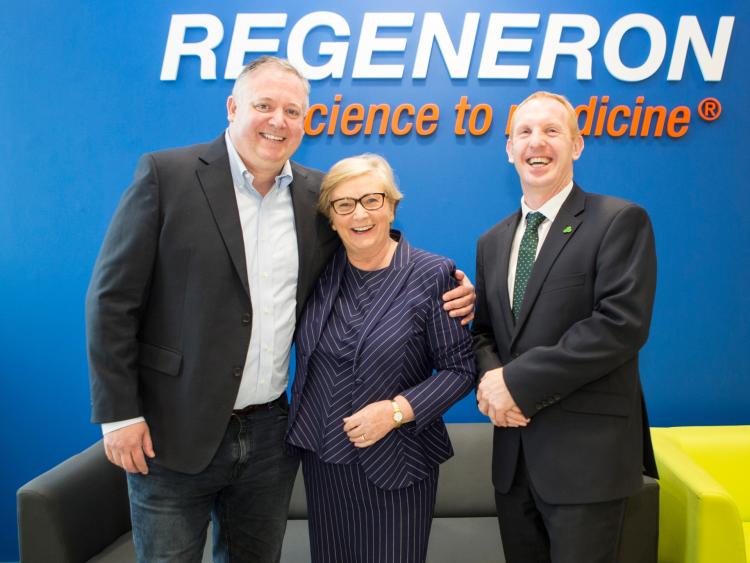 The company, which is based in Dell’s old factory at the Raheen Industrial Estate, has announced an €84.9m ($100m) investment to further expand its Limerick industrial operations and product supply.

It will mean the company – which is headquartered in Tarrytown, New York – will increase the number of people employed in Raheen to 800.

Regeneron exists to develop drugs for people with serious medical complaints. This latest news brings the total investment by the firm locally to €636m ($750m) since it opened in Limerick back in 2014.

And there is yet more good news in terms of employment, with this investment set to support the construction of a number of manufacturing suites to increase drug substance production.

Taoiseach Leo Varadkar was on hand to formally welcome the announcement, alongside Tanaiste Frances Fitzgerald, the Minister for Business, Enterprise and Innovation.

“Regeneron’s decision to expand so significantly is testament to the talent pool and attractive business environment available to companies in Ireland. This planned further expansion by Regeneron in Limerick is a significant contribution to the rejuvenation of the region,” the Taoiseach said.

Ms Fitzgerald added: “I am delighted to see the great progress made to date giving rise to further substantial investment and additional jobs to be created in Limerick. It is great news for Limerick and the wider region.”

Dan Van Plew, the executive vice president and general manager of industrial operations and product supply at Regeneron said: “Gut feel is a large portion of any site selection. When we picked Limerick years ago, we simply felt good about the community, universities and people. A few years and a lot of experience later, I can now confidently say I know Limerick is a place where you can build and thrive as a biotech.

"We are proud of what has happened here and the vast majority of this work has been completed by people who come from Munster. These folks built, validated and began production in a way I’d put up against any other team on the planet. We feel at home here and the way we have been welcomed has made our ongoing growth and investment in Limerick rewarding on the most personal levels.”

Martin Shanahan, the chief executive of IDA Ireland described the investment as “a huge boost for the Mid-West”.

"They're here only three and a half years and are looking at a fresh investment. It's a fantastic news story for Limerick. I really want to complement Regeneron and for all involved.

"It is the most modern plant of its type in the world. And it's important to note that a huge percentage of its staff are graduates from LIT and the University of Limerick. Plus 42% of its workforce are women which is a very positive signal."

Mayor of the City and County of Limerick Cllr Stephen Keary said the announcement was "fantastic news".

"I'm particularly proud that Dan Van Plew, Regeneron’s executive vice president has confidently proclaimed his belief in Limerick, that it is a place where you can build and thrive as a biotech," he said. "The US$100 million investment is a massive vote of confidence for the Limerick city region and the entire ecosystem that has been created here to foster innovation and to make Limerick more attractive for foreign direct investment.

"The latest investment by Regeneron brings to US$750 million the investment the company has made in Limerick since 2013, when it first announced it was planning to come to Limerick. And it is testament to the local workforce, that their hard work and dedication is being recognised by the company and Limerick is being rewarded with this latest expansion."

Pat Daly, Deputy Chief Executive and Director of Economic Development with Limerick City and County Council, said the authority was "working with IDA Ireland to create an environment in the Limerick city region that is attractive for companies to invest".

"Limerick City and County Council is delighted that the strong links between IDA Ireland, the local authority, third level institutions and local business is paying off and seen as a strong selling point for Limerick.

"An additional 300 jobs will bring to 800 the number of people working in Raheen by the end of next year. This is a fantastic boost to the Limerick economy, and for the entire region, as it increases Limerick’s profile and attractiveness as a location for the biotech sector."

Fine Gael senator Maria Byrne said it was "very exciting news and I am really pleased that Regeneron has decided to expand its operations in Limerick. Today’s announcement by Regeneron is a very significant announcement for Limerick and proof that our infrastructure and talented workforce are attractive to big companies."

Regeneron expanding in Limerick. Probably the second biggest biopharma plant in Ireland. What a turnaround for Limerick. @IDAIRELAND

The @regeneron Limerick site is now one of the largest biologics manufacturing facilities in the world. https://t.co/9p7RckTaUO pic.twitter.com/oBzGkQXYJA