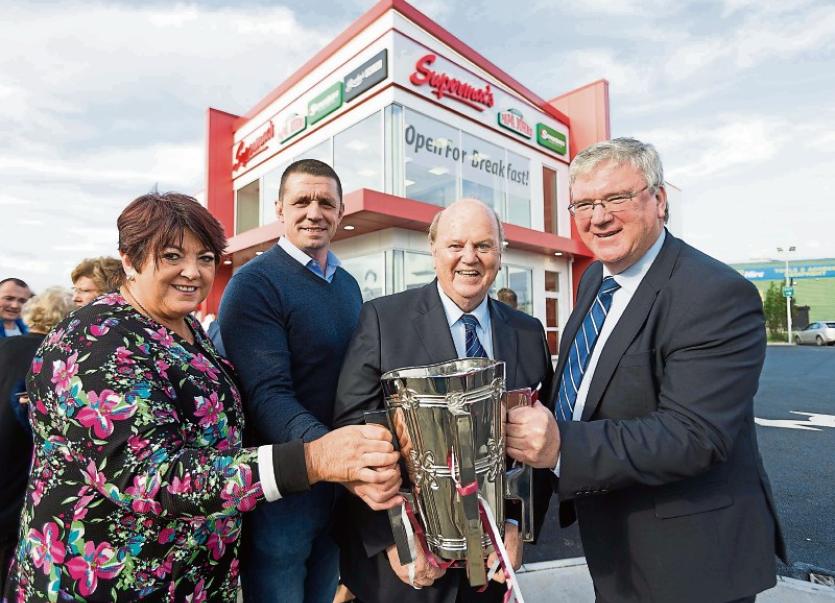 “LIMERICK is a thriving city,” hailed Pat McDonagh, the multi-millionaire founder of the Supermac’s chain, as he opened their seventh restaurant in Limerick at the weekend.

Mr McDonagh invested some €3m in the premises on the Ballysimon Road, which was officially opened by deputy and former Minister for Finance Michael Noonan, and former rugby star Alan Quinlan.

Sixty jobs were created during the construction phase of the 65-seater restaurant and a further 35 jobs have now been created in the restaurant.

This brings to 300 the number of people employed by Supermac’s and So Hotel group in the Limerick region, including the Castletroy Park Hotel, which is also poised for a €9m redevelopment, to include at least 30 extra bedrooms.

“I’m delighted with the success of this restaurant. A lot of work went into it. It was under planning for three or four years, and it was in the middle of the recession when we got the opportunity to buy the place,” Mr McDonagh said at the official opening.

Limerick, he said, “is a thriving city and it’s the envy of a lot of cities around the country because it has everything going for it.

“It’s a city that going to continue to thrive because I think the people of Limerick have put the effort and the energy into it, led by quality leaders.

“In no small way should we be thanking the former Minister for Finance for helping the city. It has the infrastructure, the education facilities, and quite an awful lot going for it.

“Industry wants to come to Limerick, and it’s a place very close to my own heart, because I went to college in Mary Immaculate. At that time, there were 450 girls and 40 fellows, so the ratio was pretty good,” he said.

Mr McDonagh outlined that the next big project is the expansion of the Castletroy Park Hotel, next year.

Deputy Noonan paid tribute to Mr McDonagh for his latest investment in Limerick, adding a seventh store in the city to his suite of outlets.