#StormBrian: Waters recede in Limerick but another high tide due tonight 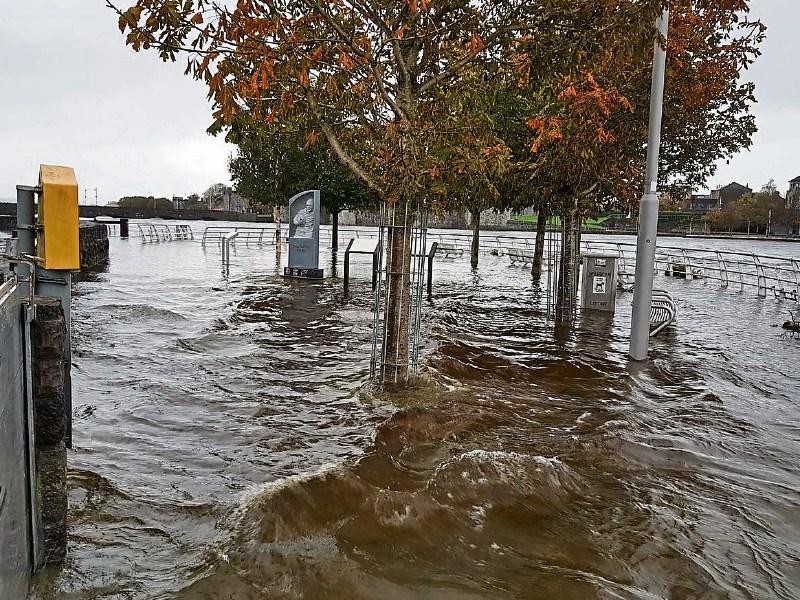 THE waters have receded in Limerick city, the sun made a brief appearance and the Munster match in Thomond Park is still going ahead.

While the worst of Storm Brian appears to be over, the public is advised that another high tide is due this Saturday night, at approximately 8.20pm.

As parts of the city were engulfed in several feet of water this morning, crews from Limerick City and County Council were deployed following some localised flooding due to Storm Brian.

A high tide just after 8am, coupled with a storm surge of 1.72 metres resulted in an actual tide of 8.53 metres.

The winds were from the south west, being funnelled up the Shannon Estuary.

The flood barriers erected along the city quays ahead of Storm Ophelia, and which remained in place for Storm Brian, held.

O’Callaghan and Clancy Strands were mainly affected, with motorists being advised to take alternative roads.

Other areas affected by flooding included: Sarsfield House – Car Park and walkway towards the Potato Market; Merchant’s Quay Plaza; Limerick Courthouse; the Potato Market; the area around Limerick City and County Council and Limerick District and Circuit Courts, as well as a small number of houses at the end of Mill Road, Corbally.

Before and after pics of Sarsfield House after flood clean-up by .@LimerickCouncil crews #StormBrian pic.twitter.com/lBA7vfxiGl

A tree was reported down in Loughill, with crews from the Rathkeale Area Office deployed.

There was also damage to the pier at Ringmoylan.

Members of the public are being advised to drive with caution on roads as there may be other trees down.

Please don’t approach the trees/ branches as there may be electricity wires hidden among them.  Contact the local authority or ESB Networks.

Another high tide of around 6.7 metres is expected around 8.20pm this evening.

Limerick City and County Council will be monitoring the situation closely, however predictions suggest there will be no significant storm surge along the Estuary as winds are expected to be coming from a northwesterly direction.

Crews will be remaining on alert to deal with any situation that occurs.

“We are appealing to members of the public to stay away from rivers and open areas of water during the storm and to heed all the directions of the authorities,” advised a council spokesperson.