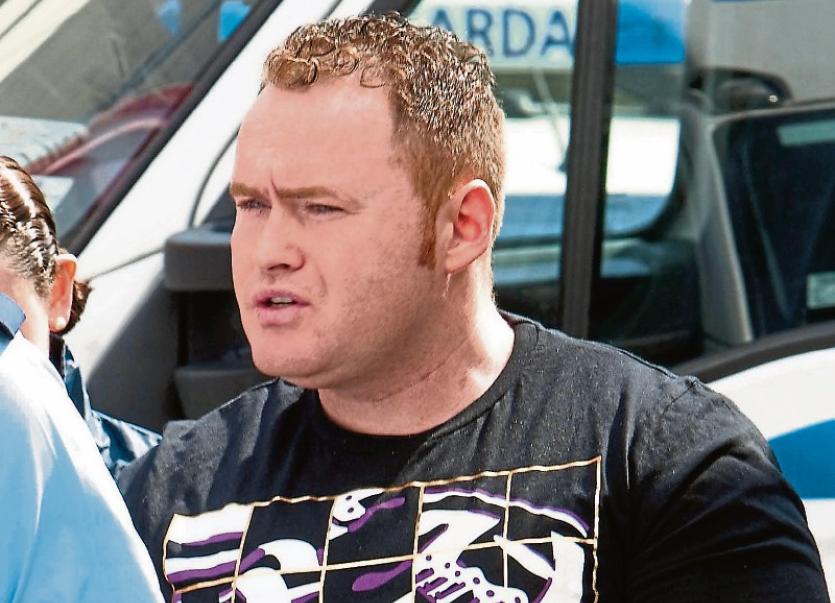 Wayne Dundon, pictured, and Nathan Killeen have had their convictions for the murder of innocent businessman Roy Collins in Limerick upheld by the Court of Appeal

LIMERICK criminals Wayne Dundon and Nathan Killeen have had their convictions for the murder of innocent businessman Roy Collins in Limerick upheld by the Court of Appeal.

Dundon, 39, of Lenihan Avenue, Prospect and Killeen, 27, of Hyde Road, Prospect, in Limerick had pleaded not guilty at the non-jury Special Criminal Court to the murder of Roy Collins at Coin Castle Amusements, Roxboro on April 9, 2009.

Mr Collins, a 35-year-old father of two, who was engaged to be married, died in hospital a short time after he was shot.

Mr Collins’ father, Steve Collins, was believed to have been the intended target of the murder, due to his involvement in a previous successful prosecution against Dundon for a threat to kill.

In July 2014, the three-judge Special Criminal Court found Wayne Dundon had ordered the murder from prison and that Killeen was the getaway driver for the gunman, James Dillon.

Dundon and Killeen were accordingly given mandatory life sentences for murder.

The men brought appeals against their convictions in April.

But in the Court of Appeal today Thursday, Mr Justice George Birmingham said the three-judge court had not been pursuaded that the convictions of either men were unsafe or that their trial was unsatisfactory for either of them.

Accordingly, their appeal was dismissed.

Roy Collins father Steve Collins was present in court for the judgment.

After a delay in bringing Dundon to the Criminal Courts of Justice building, a prison officer informed the court that both men were “refusing to come out” for delivery of the judgment.

Evidence in the trial included witness testimony, with a number of former associates of Dundon and Killeen testifying against them. These were siblings Gareth Collins aka Keogh, Lisa Collins and April Collins - who were not related to the deceased - along with Dundon’s cousins, Christopher McCarthy and Anthony 'Noddy' McCarthy.

Central to the defence's case, it was alleged, was clear and explicit evidence of collusion between 'Noddy' McCarthy and other witnesses.

Anthony “Noddy” McCarthy gave evidence that he had heard Wayne Dundon “roaring” in his cell on the morning in question. He said he saw Wayne Dundon leaning on a locker with a mobile phone up to his ear and when he asked what was happening, he said Dundon told him that he had ordered James Dillon to kill Roy Collins.

Mr Justice Birmingham said much of the appeal was focused on criticising the Special Criminal Court for concluding that Anthony “Noddy” McCarthy gave truthful evidence on which reliance could be placed.

He said the case against Wayne Dundon “morphed” from a multi-layered one at the opening to what was essentially a single witness case. This was because the trial court found no reliance could be placed on the evidence of Gareth Collins, that the prosecution was not advanced by the evidence of April Collins and that the evidence of Christopher McCarthy was “peripheral”.

Mr Justice Birmingham said there was no doubt that points of real substance were identified by the defence at trial, “points which would certainly cause any tribunal of fact to hesitate and to think long and hard”.

“It might well be that another tribunal of fact might have reached a different conclusion” but that was not the point, the judge said.

He said the trial court approached the case from the position that the evidence of Anthony Noddy McCarthy was uncorroborated and “indeed largely unsupported”.

He said the theory of alleged collusion between prosecution witnesses was front and centre throughout the trial and there was no doubt that the Special Criminal Court was alive to it.

However, he said the conclusions reached by the trial court in relation to the evidence given by other civilian witnesses left the court free to consider the evidence of Anthony “Noddy” McCarthy on its merits.

“A court made up of experienced trial lawyers who had repeatedly expressly warned themselves about the dangers of relying on the evidence of Anthony Noddy McCarthy to convict if uncorroborated, nevertheless relied on that evidence and convicted.”

What was involved here, Mr Justice Birmingham said, was far from the “classic jailhouse informer situation”, as had been contended by the defence.

A classic jailhouse informer comes forward to give evidence that while detained in the same prison as the suspect that the suspect had confessed to him his involvement in a particular crime prior to being incarcerated.

Here, Anthony “Noddy” McCarthy came forward to say he witnessed the actual commission of the crime in that he was a witness to Wayne Dundon directing the murder.

“Again, the reference to supergrass” was quite misplaced because nobody was suggesting any active involvement by Noddy McCarthy in the murder of Roy Collins.

Either way it was insignificant because the trial court repeatedly warned itself that it was dangerous to convict on the evidence of the civilian witnesses, including Noddy McCarthy, if that evidence was uncorroborated.

For the same reason, the Court of Appeal regarded as a “non-issue” the controversy as to whether the civilian witnesses, including Noddy McCarthy, should be seen as accomplices. As a matter of law, they were not accomplices so as to trigger a legal requirement for a warning, the judge said.

Had it been a jury trial, that would have been the end of the matter, but because it was a Special Criminal Court trial the court gave reasons for its decision and its analysis was available for scrutiny.

He said Dundon was “well aware of how and why he was convicted”. He was convicted because the trial court decided to believe and act on the testimony of a witness he said should not be believed.

He said anyone reading the judgment would be left in no doubt abut the basis upon which the court approached the case against Wayne Dundon and in particular how it approached the evidence of Anthony Noddy McCarthy.

“Some may disagree with the approach and obviously Wayne Dundon is very critical indeed."

However, the conclusions reached by the Special Criminal Court were open to it and the Court of Appeal was satisfied that the outcome was not called into question by any deficiency of reasons.

If there was a conspiracy, which involved the fabrication of a telephone call on the morning of the murder, then the conspirators were “inept to a truly extraordinary degree in that they could not get their lines right about who was the intended victim,” Mr Justice Birmingham said.

Anthony Noddy McCarthy said the call he heard related to Roy Collins while other witnesses said it related to Steve Collins.

If begged the question as to why, if there was a conspiracy - central to which was the invention of a phone call - those involved in the conspiracy could not get their story straight even to the extent of agreeing who the intended victim was, Mr Justice Birmingham said.

In summary, Mr Justice Birmingham said the Court of Appeal had considered all of the arguments that had been advanced on behalf of Wayne Dundon but was not pursuaded to uphold any ground of appeal.

In relation to Mr Killeen, Mr Justice Birmingham said a judgment of the Special Criminal Court at the conclusion of a trial should provide a summary of facts and a summary of the reasons for the court's conclusions. It was not necessary that all relevant issues relating to prosecution witnesses be responded to specifically or dealt with in detail.

He said the trial court found evidence that Killeen was in close contact with a source of firearm residue that morning to be “compelling”. It rejected as not being reasonably possible the contention that gun shot particles could have remained on his clothing from a trip to Prague some weeks earlier where he handled weapons on a visit to a firing range, or that it had been transferred to him by gardaí in the course of close contact shortly after his arrest.

Furthermore, whether or not Lisa Collins and Christopher McCarthy were accomplices as a matter of law was “academic” because the trial court clearly treated their evidence with “particular caution, indeed scepticism”, Mr Justice Birmingham said.