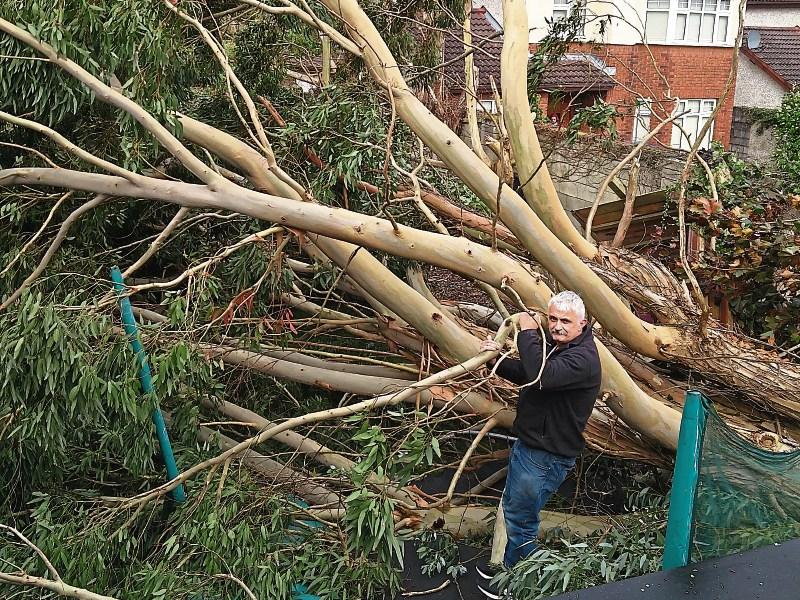 John Gibbons, Corbally, with a large tree that fell in his back garden as a result of Storm Ophelia Picture courtesy of: John Gibbons

LIMERICK people have been warned to remain alert and vigilant as Met Éireann has upgraded its wind alert on all counties along the west coast.

In light of this, Storm Brian threatens to compound the destruction of Storm Ophelia caused this week.

Met Éireann has confirmed that a deepening depression coming in from the west “could give strong winds” on Friday and Saturday morning.

So far, Limerick has been issued a 'Yellow' wind alert, while neighbouring counties Clare and Kerry have been upgraded to an 'Orange' wind warning.

The forecaster said that if there are any weakened trees or loose objects, they “could be easily disrupted by any wind”.

There will be strong gusts of 110kph to 130kph which will move eastwards along the south, Met Éireann has said.

For hours on Monday, hurricane-force gales battered the city and county, causing 20,000 power outages, numerous road closures due to fallen trees, downed power lines, a loss of water supply, and a widespread lockdown in communities.

And though most schools, services and businesses across the county were back in action by Wednesday morning, there were still up to 1,000 homes without electricity since Monday afternoon.

And as soon as the council and utilities commenced the clean-up and ensuring everyday life was restored, Met Éireann stated on Tuesday that the west coast was likely to see another bout of serious weather.

Echoing this warning, Limerick's Chief Superintendent David Sheahan has urged the public to “be extra cautious and not to do anything that will put themselves or other people at risk”.

He praised the cooperation between the gardaí, HSE, local authority and the hospital, and commended the public for their calm response to the storm.

As the village of Hospital remained without power on Wednesday, farmers were put “under immense pressure”. Cllr Gerald Mitchell said that one farmer had to fork out €10,000 to purchase a generator to continue his work during the prolonged outage.

With John the Baptist Community School closed for a third day, along with Oola and Caherline national schools, Cllr Mitchell said that the local community have been left “frustrated and anxious”.

Cappamore Fire Station chief John Mulready said that the decision to close schools was a major factor in more lives not being lost. He added that while the death toll was low, three deaths nationwide “is still not acceptable”.

It has been a week of mourning for the LIT community, following the tragic death of student Michael Pyke, from Cahir, who died while clearing trees during Storm Ophelia. LIT president, Prof Vincent Cunnane announced on Tuesday that flags were to fly at half mast in recognition of the 31-year-old electrical apprentice student.

In West Limerick, Croom faced a major setback when the roof of their brand new sporting complex was blown off during the storm, while the largest power outage was in Abbeyfeale with 3,000 customers without electricity.

Irish Water said that less than 600 customers in Herbertstown were without water on Wednesday evening, and was able to restore it by 5.45pm. However, there are still issues with the supply in the County Limerick village this Thursday.

Novas homeless services, which reached full capacity at three of its facilities in the city, said that Storm Ophelia “highlighted the vulnerability of homeless people”.

He said that Ophelia “showed just how exposed we are here to risk of flooding”, adding that his visit will be timely.

Clancy Strand was the only location of note to suffer from minor flooding, after the council activated its barriers over the weekend.

At University Hospital Limerick, there were 117 in the ED, from Monday 8am to Tuesday 8am.

This is “significantly” below most Mondays that often have more than 250 patients.

Chief Super Sheahan added: “Particularly, at this time of the year, it is unpredictable from a weather perspective. It brings frost, it brings rain, it brings wind. And these are all things that, in many ways — I am looking at it from a garda perspective — it brings new challenges to our roads every time.

“From our perspective, we are always asking road users to be vigilant. If people are not vigilant, it will have a knock-on effect on our hospitals and all other services,” Chief Supt Sheahan added.