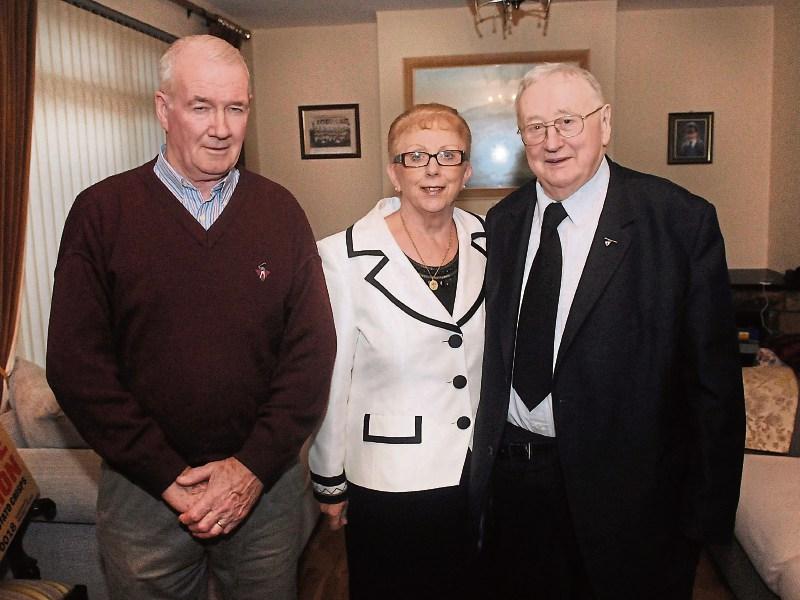 Des Fitzgerald, right, celebrated the statue of Our Lady at his home with family and friends Picture: Gareth Williams

IT WAS the third ever Friday the 13th to land on the month of Halloween this millennium.

Despite the promise of an unusual spell of warm weather, Limerick city had been darkened by a heavy gloom of rainfall on this October night.

But in the sanctuary of Des Fitzgerald’s home, a shower of luck blessed his backyard where Our Lady of Fatima rested in the shelter of a stone arch, illuminated by a soft blue light.

Some of the 50-something worshippers said that this was the work of Our Lady, who in a reported apparition 100 years ago, created a rift in the clouds to let the sun shine through.

Perhaps that could have been the case again, if it wasn’t for the grey blanket in the sky. For most of the people at the Fitzgerald household in Greystones, these were the little signs of miracles.

But it was Des, he believes, who experienced the greatest miracle — the ability to walk unaided for the first time in more than 10 years.

After purchasing the 4”3 statue of Our Lady for €400 from a shop in Wickham Street, he found himself not needing his wheelchair, now stored in the back seat of his car.

“I said the Hail Mary and placed my left hand on top of her head and asked her to look after me and give me my health back. I have had a wheelchair for 10 years and was only able to walk ten yards before having to sit down.

“I hadn’t the statue 10 minutes when I was able to walk fully. It was a miracle straight away. To prove it to myself, I walked out of the house, down to the gate and back up again. Before I was barely able to stand up for a minute on my own,” he told the Limerick Leader.

A spritely Des sat in the kitchen, welcoming anyone who wished to pray to Our Lady, whose light grew more resplendent as dusk transitioned into night.

There were no half-measures in the organisation of the event; a buffet and range of refreshments were available for those passing through.

“I am absolutely thrilled,” Des told the Leader before wiping away a tear, “I am emotional.”

“I was hoping for about 40 or 50 people, but it has gone over that now, thank God. I am hoping my neighbours will enjoy themselves and that they will come back again.”

Paddy Coleman, nearly retired, was responsible for the stonework, and he said the two-day effort “absolutely went beyond my expectations”.

“The nicest bit for me was fitting in the statue. Then I could see what we were after achieving,” he enthused.

Fr Mangan said that he was delighted at the turn-out of the event and for Des.

“It is fantastic to meet Des and his family, and to see so many friends and neighbours here this evening. And a little while we will bless the lovely statue in the yard, which he has beautifully done.”

Des commenced the ceremony, thanking all those who attended and the two priests.

Fr Young said, arms folded and counting with his fingers: “You know, Des, we are in the Sun newspaper now, we are in the Independent, and of course the Leader has us on the front page. And I got a call from somebody up country, asking if your house was wheelchair accessible. And I said: ‘When it comes to Des, everything is accessible.’”

He told the Leader that the “joy for me tonight was to see so many people communicate with each other at, I feel, a level that is needed. It is very much wanted today”.

This follows his poignant speech, in which he discussed the need to open the channels of communication as more people are suffering from mental health illnesses.

“It’s not natural to go through this life alone,” he poignantly spoke at the conclusion of the night. “I would ask only one request.

“So many of our senior citizens are being held hostage. I see it a lot out in the country, and many of them are living in isolation and loneliness. Let nobody in your community be lonely, for if you do, you have failed to understand the teachings of Jesus Christ.”

As the final ‘Amen’ was uttered, many continued the social gathering in the two-storey home until 9pm. One by one, the widower and father-of-four shook hands with friends and neighbours saying farewell as they left through the front door.

At the end of the night, an elated Des sat in the kitchen with a couple of relatives, overwhelmed by an evening of relentless joy.

And there he sat content and quiet for some time, in front of the window and in view of the statue that has brought the ‘miracle man’ a new lease of life after 82 years.