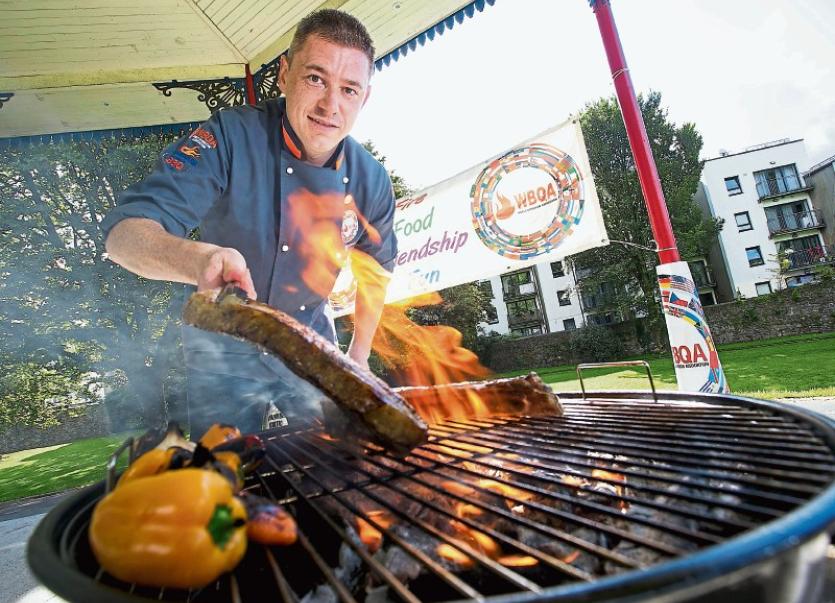 John Relihan, of Holy Smoke, pictured at the launch of the WBQA World BBQ Championships 2017

THIS weekend will see an explosion of food culture in Limerick city as two major events are set to take place.

Up to 600 cooks from 30 countries will descend on the People’s Park to battle it out on the flames for the prestigious 17th WBQA World BBQ Championships this Friday, Saturday and Sunday.

It’s the first time this international event has taken place in Ireland, and spectators can walk among the competitors where tasters will be offered.

“This is not burgers and sausages, it’s barbeque at a very high level, cordon bleu cooking from a barbeque. You could have anything from Michelin star chefs to backyard enthusiasts, competing against each other,” said WBQA president Patrick O’Sullivan.

“It’s our very first time hosting it in Ireland. Prior to that, it was held in Sweden, Germany, Poland, Switzerland and so on. It’s a very unique event,” he added.

There will be restaurants, bars, and a feast for the eyes and ears in the form of belly dancing and jazz performances.

“We have over 100 certified judges flying in from around the world. These people go through a training process in order to judge the texture, taste and quality of the product that is entered into the competition. It’s an extraordinary sight to see the efforts of the contestants,” said Mr O’Sullivan.

The event kicks off in the park this Friday, October 13, from 4pm to 10pm, and continues on Saturday and Sunday from 11am until 10pm.

The weekend will include a BBQ cook-off, the world of food and beer festival, a team parade through the city, a winter garden display, and a pigtown harvest fair.

Also on Saturday, Culture & Chips is back  from 11am to 7pm at The Crescent, O’Connell Street.

This year’s theme for the quirky food festival, which celebrates the food heritage and culture of the city, is Eat in the City.

In celebrating the city’s food culture it wants to encourage people to eat in the city and experience all that it has to offer.

See the food magazine with this edition of the Limerick Leader for more on the city’s flourishing food credentials.