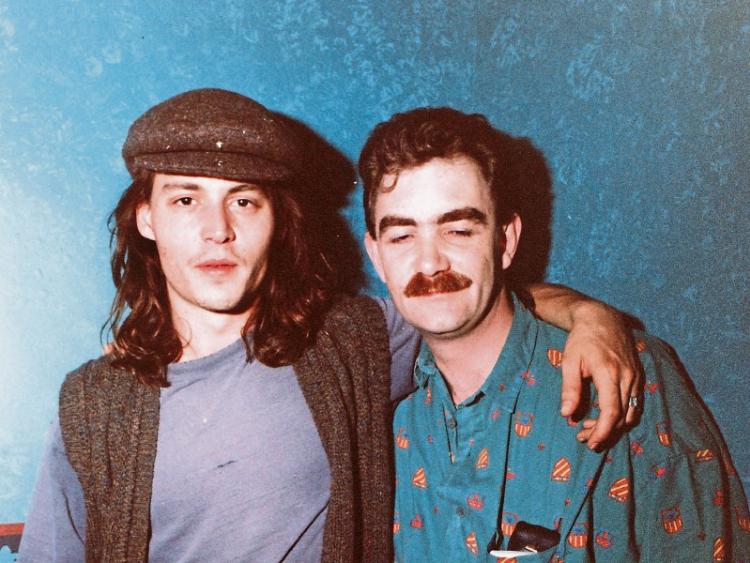 Johnny Depp in Ted's in Limerick in 1991, with Frank Murray, its owner at that time

HOLLYWOOD star Johnny Depp was so smitten with a Limerick barmaid during his visit to the city that he ordered a taxi to collect her in Kilkee for a second rendezvous after their first meeting.

Depp’s visit to Limerick in 1991 has made the headlines after he referred to Limerick as ‘Stab City’, but the former owner of Ted’s nightclub said he may have other memories of his time here which had not been revealed – until now.

Speaking to the Limerick Leader this week, Frank Murray, the former owner of the O’Connell Street bar and nightclub, recalled the halcyon days when Ted’s attracted a host of celebrities.

He said he clearly remembers the night when Depp and his friend Gerry Conlon, who was wrongly jailed for IRA bombings, walked into his premises in 1991, with the latter being a regular visit to the city hotspot.

“He [Depp] chatted to everyone in the bar, and was there to have the craic, but he took a shine to one particular staff member, who was working that particular night.

“She was an absolutely stunning girl, really lovely and has a great personality. He came back again the following night only to find that she wasn’t working that night,” he told the Limerick Leader.

The actor, then aged 28, made enquiries about how he could find her again, and was informed that the young Limerick woman, several years his junior, was working in another bar in Kilkee, Co Clare, that night.

A taxi was dispatched to collect his potential love interest and bring her to their date, after a nearly three-hour round trip.

The employee was allowed to finish her shift in that bar early to return to Limerick to meet Depp, after he paid the fare of some £100, Murray confirmed.

The woman, who is now married, has not commented publicly on her meetings with Depp.

Mr Murray, who owned the bar for more than 30 years, recalled that Depp “permanently had a bottle of whiskey in his hand” for most of those evenings he frequented the bar, and said he was very “down-to-earth”, and posed for pictures with several staff members.

Russell Crowe, Kiefer Sutherland, Richard Branson and Limerick’s legendary hell-raising thespian Richard Harris also quenched their thirst at the bar and nightclub, which has since re-opened under new management.

The bar was previously owned by Ted Moynihan, who went on to establish Matt the Thresher restaurants in Birdhill and on Pembroke Street in Dublin.

In a foreword to a new book about Guildford Four member Gerry Conlon, whom Depp was friends with, he wrote: “Our brief pit stop proved to be one of the most chaotic nights that I ever remember. Suffice to say we conquered Stab City.”

The book, In the Name of the Son: The Gerry Conlon Story, by Richard O’Rawe, which is due out later this month.

Former Minister for Defence and poll-topper, Willie O’Dea, said while he at times feels he should ignore the reference to Limerick’s bloody past, “it really irritates me and I find it hard to let it slide.”

“It’s a lazy, throwaway remark by people who have no knowledge of Limerick,” deputy O’Dea told the Limerick Leader this week.

O’Dea said the comments were born “from the depths of his ignorance...talking as if Limerick is somewhere to be conquered.”

He added that the reference is “an irritating moniker, dug up from the grave” and is “so out of date it is laughable.”

Metropolitan Mayor of Limerick, Fianna Fail councillor Sean Lynch, said the Pirates of the Caribbean star now “owes” Limerick a second visit, to see how it has moved on from its past.

Mayor Lynch said the city’s past cannot be whitewashed but urged people to look to the future.

“We won’t knock him for his comment, but if he’s ever around the country, he should come to Limerick. He owes us that much. Limerick is now a great place.”