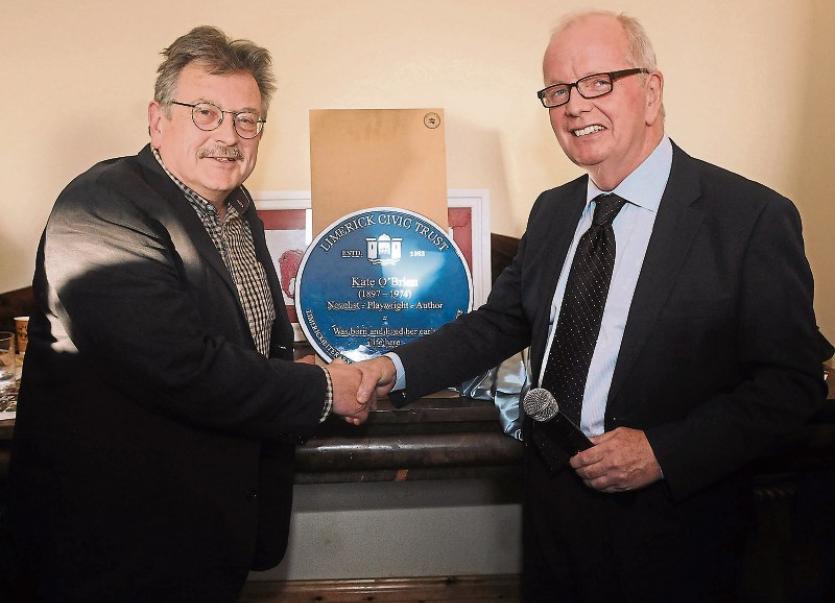 In 1897, the famous author, playwright and poet was born at Boru House on Mulgrave Street, where the signature Civic Trust plaque was erected this Monday evening.

Kate O’Brien’s novels were some of the earliest examples in Irish literature to feature themes on homsexuality, prompting some of her published work to be banned in Ireland under strict censorship laws.

Boru House, now owned and refurbished by David Fitzgerald, will become  a stop as part of the Limerick Writers Centre’s literary walking trail.

Dominic Taylor, of the Limerick Writers Centre, said that they were delighted to share the special occasion with Limerick Civic Trust at the red-brick birthplace of the author.

“The strength of our literary heritage is a significant component of the history of our city.

“Our walking tours will allow people to trace the footsteps and visit the inspirational retreats of our local writers, several of whom, and particularly Kate O’Brien, have made a major contribution to defining what Irish literature is about.

“She was serious and passionate about her work, and she did not compromise to write bestsellers. She spoke about the slow and difficult process of creative elaboration,” he added.

Mr Taylor said that it is interesting that three of the writers that are commemorated by the Limerick Writers’ Centre “all have European connections”.

“The poet Desmond O’Grady spent much of his life in Italy. The Limerick-connected poet Robert Graves lived for many years on Majorca and the influence of Spanish literary culture on the work of Kate O’Brien is well known.