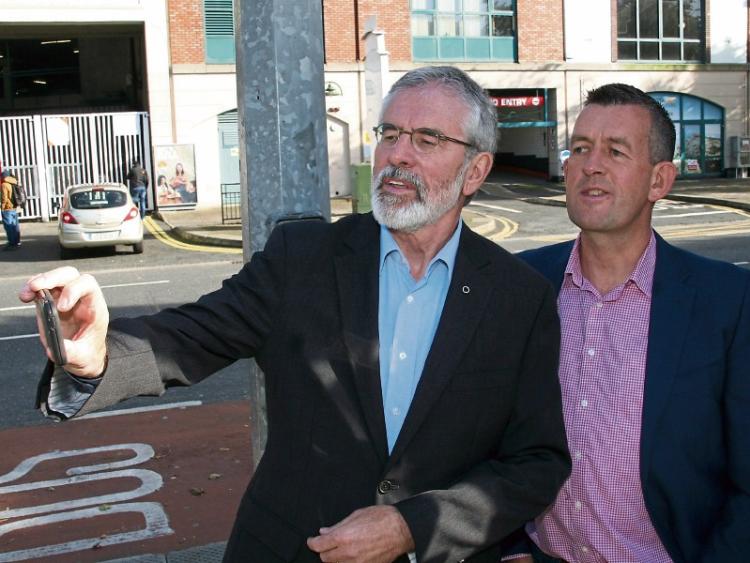 LIMERICK Sinn Fein TD Maurice Quinlivan says his party is likely to pursue a multi-candidate strategy across Limerick at the next local elections.

The party achieved a 100% record at the 2014 local election here, with its six candidates taking six seats – one in each ward.

Now, Mr Quinlivan – who topped the poll in 2014 and followed this up with a Dail election last year – says Sinn Fein is ready to go further.

“We haven’t decided yet, but some wards, we will have two and three candidates. We have identified these in the city, and maybe one of the county will have a two-candidate strategy, possibly Cappamore-Kilmallock,” Mr Quinlivan said, “We’d be pretty confident.”

Limerick’s Sinn Fein TD was speaking this Monday during a visit to the city by party president Gerry Adams.

He said it was still undecided whether Mr Quinlivan – who had a surplus of 1,164 votes at the general election – will have a running mate at the next general election, whenever that falls.

“Maurice has done really well, he has put Limerick on the map in terms of economic issues, the housing crisis and urban homelessness, which is probably proportionately even worse than Dublin, and the ongoing mess in our health system, which we see here. We want to build on that. But whether we build on it with a one or two candidate strategy, we have yet to decide. But we are in a state of election preparation,” he said.

While here, Mr Adams met a number of local party activists, and also attended the launch of a new Traveller strategy.

Entitled Minceirs Whiden, the blueprint is aimed at getting democracy to work for the Traveller community.

Speaking to the Limerick Leader at the party’s offices in Denmark Street, Mr Adams also ruled out the possibility of his running in the 2018 election for Irish President should, as anticipated, Michael D Higgins serve just one term.

“No,” he said unequivocally, “I have no interest in that role whatsoever. I never have had, and never will have. I am an activist, and this is not something which interests me.”

Mr Adams also said as a party, Sinn Fein is opposed to Irish Cement’s plans to burn used tyres and waste in Mungret.

”We would be against incineration, particularly in a case where you have it near a city. Where you’re burning tyres and burning toxic materials, it just isn’t right. We will be working with the local community in terms of preventing that happening,” he said.

The party’s president also said he wants Sinn Fein to be a party of government.

“Our focus is on this. There is no point shouting from the outside if we can be in there achieving change. There is also the issue of the national question,” he added.