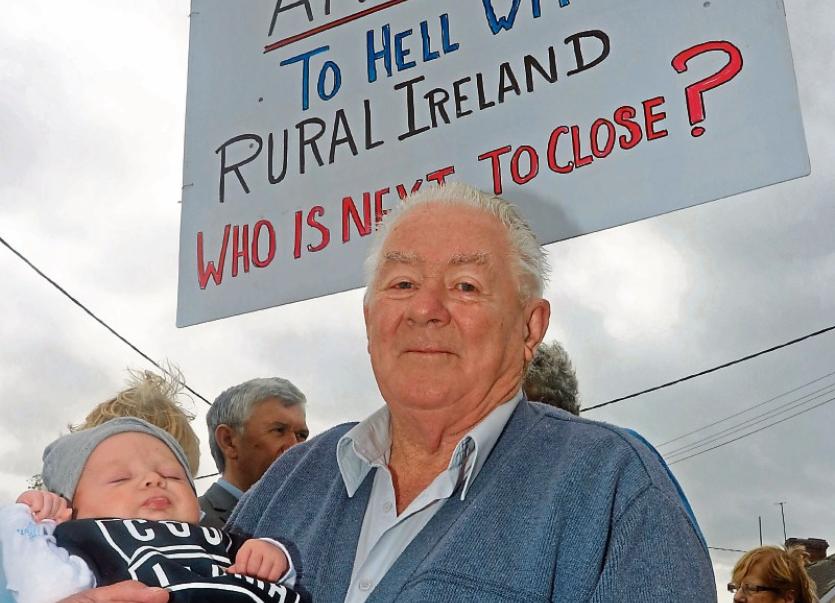 Over 100 people turned out in protest at the proposed closure of Old Pallas post office including Bill Gammell, aged 83, and his great grandchild, Danny O'Keeffe

THE PARISH of Pallasgreen-Templebraden in County Limerick has delivered a strong message to An Post – do not close their office in Old Pallas.

Up to 200 people turned out on a Tuesday morning for the Leader photographer to show their support. Over 600 have signed a petition to save Old Pallas post office. The issue has been raised by politicians in meetings from Kilmallock to Brussels. The post office has been in the O’Dwyer family for over 100 years and locals want to keep it that way.

The huge response follows a customer notice from An Post which reads that they are “considering the future service provision needs at Old Pallas which could include the closure of the office”.

“We are horrified by this attempt by An Post to remove one of the last services left in the central village of Old Pallas. This post office has been serving the public for over 100 years and is situated in a thriving enterprise, which together with the adjacent co-op store, serves the needs of the agricultural and business hinterland.

"Has not this co-location with a busy shop been an objective of An Post in recent times, and a salient reason not to close this particular post office?”

He said the post office also cares for hundreds of older people from neighbouring parishes of Herbertstown, Kilteely and Knockane.

“All of whom have had their post offices closed in recent years in the understanding that they would be able to transfer their business to the closeby Old Pallas post office. This proposed closure will upset, and discommode, the many older people who have found a warm and welcoming service in Old Pallas. We urge An Post to work with the local community to build up this post office as part of a thriving village.

"This community will work hand in hand with An Post and the O’Dwyer family to ensure that it will thrive and build on its 100 year tradition.” Mr Ryan asks is An Post ready to take up the challenge to work closely with this community in the interests of building up the fabric of rural life and employment?

“Or has it always to be just about the bottom line?” concluded Mr Ryan. A number of politicians have also lent their support. Cllr Brigid Teefy raised the matter at Thursday’s Cappamore-Kilmallock municipal meeting and all councillors supported her call to keep it open.

Cllr Teefy said if it closed it would be another “dagger in the heart” of rural County Limerick.“It is a very busy post office in an excellent hub,” said Cllr Teefy.

Before An Post makes any decision, interested parties are invited to submit their views no later than October 6.

In his submission, Deputy Niall Collins said Old Pallas post office recently took on the customers of Kilteely and Herbertstown post offices when they closed.

"This should be viewed by An Post as positive in confirming its future viability and as such should not be considered for closure,” said Deputy Collins.

Deputy Tom Neville said he attended to show his solidarity with and support of the people of Old Pallas and the retention of their post office.

“The bottom line is it needs to be retained for the people of Old Pallas and surrounding areas, particularly the elderly. It also complements the village in that it is part of an overall business - grocers and petrol station. The post office is an integral part of that. I am stressing that the continuation of that service is required,” said Deputy Neville.

David Thompson, who made the sign seen in the picture above, said if it closed “it will be another nail in the coffin of rural Ireland”.