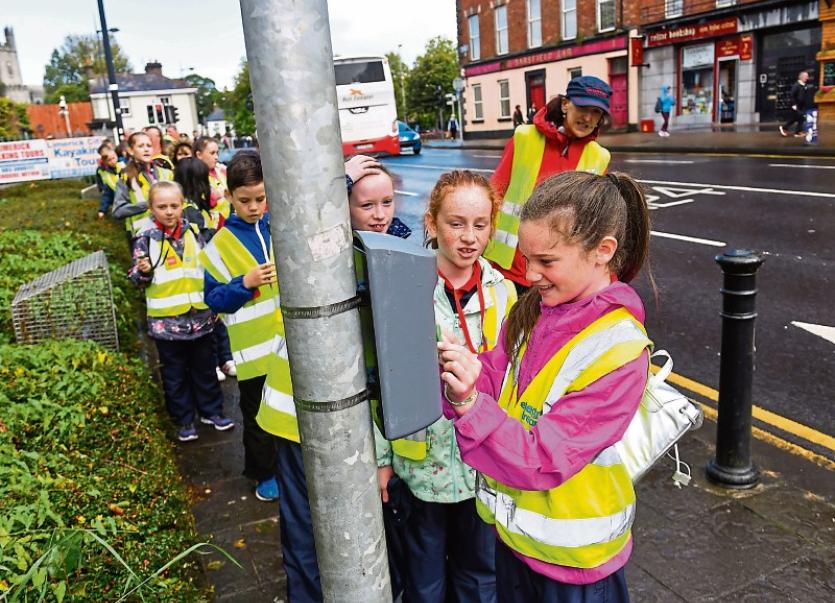 THE rain and wind didn't stop hundreds of local school children taking to the street at the launch of Beat the Street Limerick.

Joined by Mayor of the Metropolitan District, Cllr Sean Lynch, and representatives from Limerick Sports Partnership, the children marked the start of the challenge by walking the three main bridges in the city.

The city-wide walking and cycling competition that challenges local residents to see how far they can travel together in just seven weeks kicked-off this Wednesday, September 13.

Dozens of beeping and flashing sensors called Beat Boxes have been placed across Limerick which can be tapped with free Beat the Street cards which can be collected at your local distribution point.

Players can set up a team or join many of the other teams or even play individually to start earning points and prizes.

Speaking at the launch Cllr Lynch encouraged locals to get out and take advantage of “our beautiful historical city” by taking part in the game.

“Beat the Street is a very simple way of getting people to engage in more healthier pastimes and living,” said Cllr Lynch.

“We can all do better when it comes to exercise.  Just walking up and down the stairs in work rather than taking the lift.  Walk or cycle to school or work.  These simple steps can help improve your quality of life and that’s what it’s all about,” added Cllr Lynch.

Running until Wednesday, November 1, Beat the Street will see schools, businesses, families, charities and individuals across Limerick compete to see who can walk, run, cycle or scoot the furthest.

“Beat the Street is a fantastic initiative to help get people active.  It’s all about inspiring and encouraging people to make small changes, such as walking or cycling to school or work or to the shops every day, to improve their health.

“It is just another way of getting people to realise that your health is your wealth.

Anna Grant, engagement manager for Beat the Street said: “We’ve seen lots of excitement building in schools, businesses and groups across Limerick in the past few weeks.”

Beat the Street is being delivered by Intelligent Health with support from Limerick Sports Partnership and is funded by Limerick City and County Council, Sport Ireland and Healthy Ireland.

To find out more information including where to pick up a Beat the Street card and map, you can go online on www.beatthestreet.me/limerick.