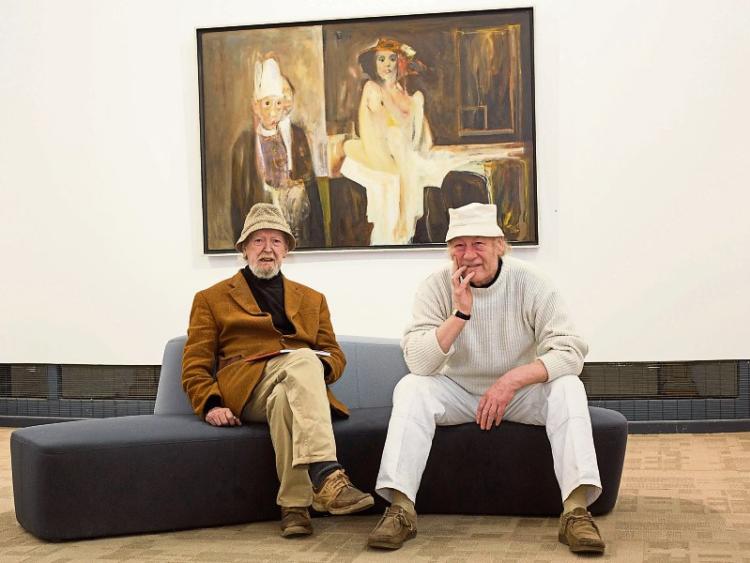 The late Jack Donovan and fellow artist John Shinnors who was taught by Donovan in LSAD at the Limerick School of Art and Design | Picture: Alan Place

OVER 100 works of art by the late, acclaimed Limerick artist Jack Donovan are being held in storage – some of which have never been seen by the public.

Renowned for his series of nude paintings, and his other eclectic interest in clowns, up to 20 of those works will be unveiled in the Cornstore restaurant in Limerick city this Wednesday night.

It is the first time the restaurant has ever hosted an art exhibition and art sale, but his widow Eileen vowed that there are some paintings which she could never bear to part with, including a self-portrait. “He was interested in nudes from the word go,” Eileen told the Limerick Leader.

“He was born to paint – he wasn’t interested in much else, apart from horse racing. He always had a sketch pad in his hand. He was totally dedicated to art,” she said.

Eileen, who was married to Jack for 52 years, said: “There are well over 100 in storage, but I haven’t counted them all. Some of his clowns [paintings] I won’t let go for less than €3,000, and there are others I can’t bear to part with. Others will just go back into storage if they haven’t sold.”

Prices and titles for the individual works will be available on the night.

Donovan, 80, who died in June 2014, was regarded as a master of the arts, especially those who were under his tutelage in the Limerick School of Art & Design, where he was once head of the school.

The works will be available to view in the restaurant until September 30.