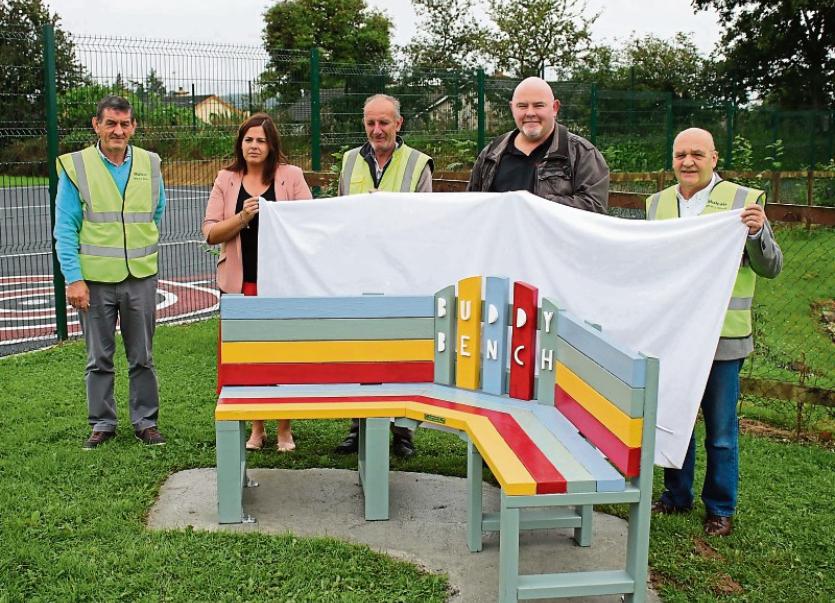 WE ALL need to lean on someone at times and where better to do it than on a buddy bench.

It is a brilliantly simple idea to eliminate loneliness and foster friendship in playgrounds.

The project began due to a chance conversation between Willie O’Neill, of Mulcair Men’s Shed in Abington, Murroe, and Marie Cremin, principal.

The idea of the buddy bench is for a child to sit down on it if he or she is alone and would like to play with someone. It also alerts teachers on duty that they are on their own and encourages other boys or girls to go play with them.

Ms Cremin, principal, who is from Newport, said she was giving Willie O’Neill, of Mulcair Men’s Shed, items from a shed.

“It was timber, old desktops and things like that. As a thank you Willie asked us if there was anything they could do for us and I said, ‘I would love a buddy bench for the school,’” said Ms Cremin, who explained the idea behind it to him.

Willie went off, did his homework and he and his colleagues in Mulcair Men’s Shed got to work.

“I got a message while I was on holiday with a picture of one they had started to make. It is beyond anything that I could have imagined. I’ve wanted one for the school for years. They really did a fantastic job and it will be here long after I am gone,” said Ms Cremin.

If a child is walking around on their own it is easy for a teacher to miss them as they blend in but if they go over to the bench they are obviously there for a reason, she said.

Ms Cremin was asked if there could be a stigma if a child went over and sat down on the buddy bench.

“Absolutely not. The teachers have given them lessons to go with it. If they are sitting there they are just not feeling themselves - they might need someone to sit with them and invite them to join in, or just sit and have a little chat. Sometimes we need a bit of time out as well,” said Ms Cremin.

“We have a great school here. Everybody does their bit and the boys are fantastic because they feel loved and valued and we celebrate them all the time. They look forward to going to school,” said Ms Cremin.

Willie said the buddy bench is fantastic for children.

“They mightn’t want to play soccer or hurling or whatever or you might have a child that is shy. Another boy can then go over to them. The teacher knows too that they are on their own and can bring a child over to play,” said Willie, who built it and painted it with his Men’s Shed members.

“It is lovely and bright and colourful. It is a wooden bench in a half moon shape. Newport is the first school and we are going to make benches for Mungret and Murroe schools too,” said Willie.

Meanwhile, Mulcair Men’s Shed is forming a male choir and you don’t have to be Luciano Pavarotti to join!

“We will be the first men’s shed in the whole of Ireland to have a full male choir. Our first rehearsal was on Sunday and there is a great buzz about it,” said Willie.