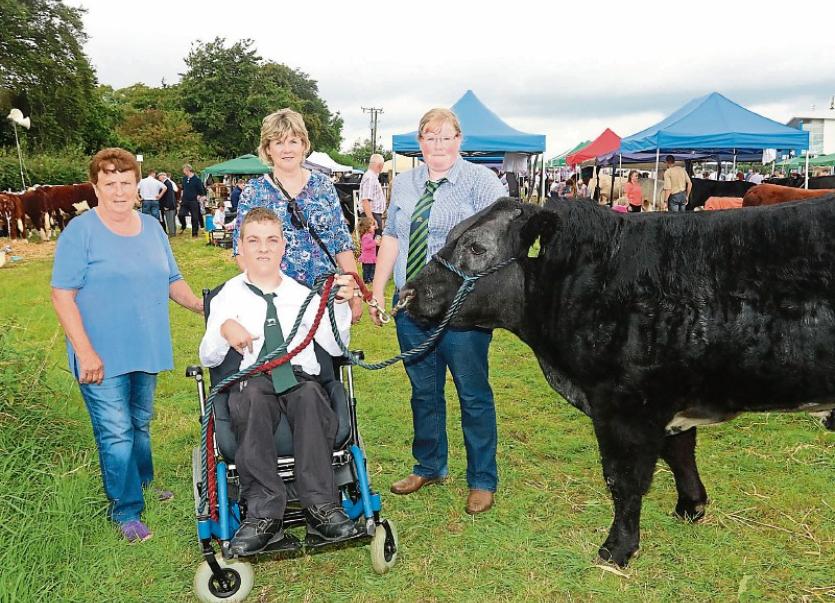 THERE was no better handler of cattle at Limerick Show than 16-year-old Jason Teague.

While many grown men and women struggled with headstrong heifers and belligerent bulls, Jason was calmness personified, just like his pedigree bullock.

When the Leader asked if we could take a photograph, Jason manoeuvred his wheelchair around, untied his Limousin X bullock from the gate and led him over like an old Labrador.

Jason, who has cerebral palsy, is on a winning streak.

“I got champion at Mohill Show last week and reserve champion at Iverk Show on Saturday,” said James, from Abbeyshrule in County Longford.

No sooner were they home from Kilkenny that night they were planning for Limerick Show on the following morning.

“I was up at 5am and we left for Limerick Show after 6am. I’ve been going to shows all my life,” said Jason, who has no fear of holding on to an animal weighing over 500kgs.

“He is as quiet as a lamb,” smiles Jason, who was dressed in the show person’s uniform of crisp white shirt, tie and trousers.

He keeps a close eye while his bullock is shown in the ring. Sadly his prized possession was out of the places at Limerick Show but Jason really enjoyed his day in the thick of the action.

His mum, Jacinta said she and husband James are very proud of Jason. Grandmother, Maureen, also made the journey to Limerick Racecourse.

“Jason loves cattle and shows, absolutely loves it - that’s his hobby. We had a great day at Limerick Show. It is a long journey and an early start but he doesn’t mind once he is going with his bullock. He was awake at 5am and has to wear his whites.

“He holds the animal’s halter while we comb and wash the bullock. It would stand for him because he is an auld pet and is used to Jason. Jason has been around him since he was a calf,” said Jacinta.

And the bond between boy and gentle beast was there for all to see.