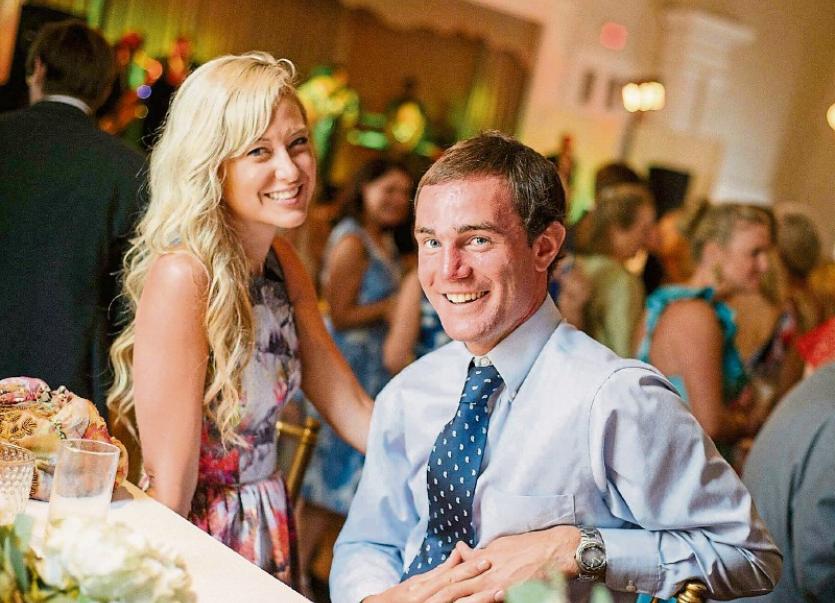 Molly Martens brother Connor, pictured together at a wedding a month before the trial in North Carolina, in which she was convicted of second degree murder

A BROTHER of convicted murderer Molly Martens Corbett has claimed that she has been stripped of all “dignity” in prison, as she begins her sentence of up to 25 years for killing Limerickman Jason Corbett.

Brother Connor Martens has issued a statement about the high profile murder case, as she begins her sentence of up to 25 years.

Ms Martens Corbett, 33, and her father Thomas Martens, 67, a former FBI agent, were convicted of the second degree murder of Limerickman Jason Corbett, by a jury after a month-long trial. Both were sentenced to between 20 and 25 years in prison.

The father-of-two was beaten to death with a paving stone and a 15 ounce aluminium baseball bat in his home in Panther Creek Court, Wallburg, North Carolina, in the early hours of Sunday, August 2, 2015.

Connor Martens has now detailed his sister’s first few days in prison, claiming she has been stripped of all “external dignity”.

“Upon entering prison on August 9, she was not given shower shoes or a tooth brush for the first nine days. This prevented her from showering and obviously, brushing her teeth. There is no air conditioning. Over 15 people have passed out in her short time there. There are no activities.

“On rare occasions, she gets to go outside only to be reprimanded for walking too fast in her attempt to get exercise. Her hair has been dyed and cut against her will stripping her of any external dignity she may have had left.”

In the run-up to the trial, he said “it was difficult to escape the anxiety of 12 strangers [on the jury] determining your life, but we never could have imagined what has happened.”

However, he said that his post online “isn’t about the conditions of the North Carolina Correctional Facility”, as the family claim that she and their father were denied a fair trial.

He also claimed that the jury in the case have made “a mockery of our judicial system”.

His issue, he said, is not about the “ineptitude of a rural county investigation or the prosecution preventing evidence from being presented”.

“It isn't even about whether they’re guilty or innocent. At this point, it is about every American and their right to a fair trial. The jury has gone before a national audience and made a mockery of our judicial system,” he wrote.

Addressing comments made by member of the jury, including the jury foreman, he said his sister did not testify, nor did any witness testify to her character in any way.

Ms Earnest said that the family has in recent days taken to the streets of Washington DC “to spread the word about how Tom saved his daughter’s life and how the State of NC [North Carolina] convicted them both for second degree murder. Our fellow Americans were outraged.”

She has also begun tweeting former US president Barack Obama over the case, urging him to “please help to right this terrible injustice”.

To date their campaign to fund a retrial has raised $18,497 from 123 backers, or six per cent of their fundraising target.

Prosecutors have sought to reject a motion by defence lawyers to dismiss the second-degree murder convictions.

Attorneys for the American father and daughter argued that post-trial, voluntary media interviews and social media posts by the jurors showed misconduct throughout the trial.

Tracey Lynch, sister of the late Jason, has previously said “it does not matter what the Martens said or say, at this point” as they are “convicted killers and liars.”

Brother John Corbett said anyone who donates to the Martens fund is “condoning cold calculating murder and do not respect the law of the land in the US, and do not deserve to be called US citizens.

“They should donate their money to the relatives of murder victims in North Carolina.”

He said his brother died at the hands of “cold unapologetic killers”.