Irish Cement hearing in Limerick: 'People's fears have not been put to rest' 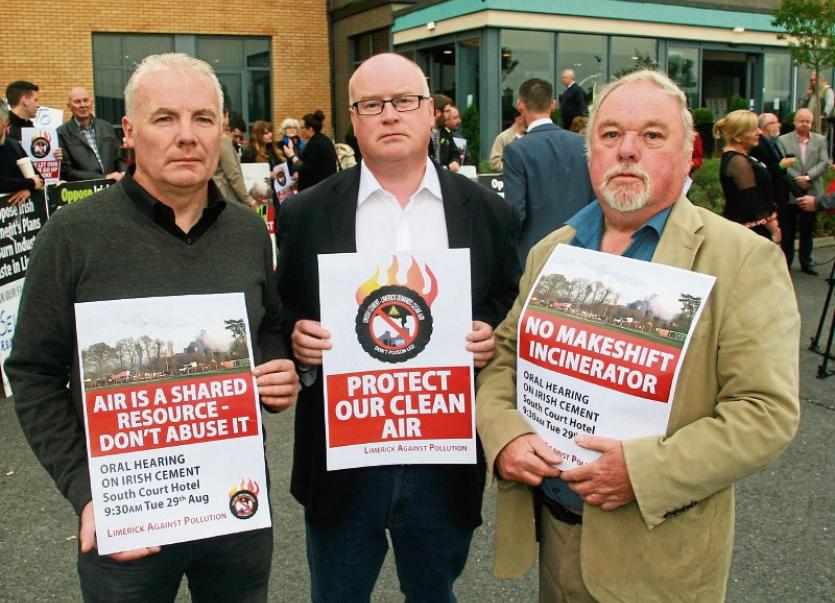 EMPLOYMENT cannot come at the cost of human health, the MEP for Ireland South, Liada Ni Riada has said at Tuesday’s oral hearing into Irish Cement's plan to burn waste material at their plant at Mungret.

Having listened to witnesses from Irish Cement throughout the day, she said: “I don't think the people's fears have been put to rest.”

The oral hearing was called by An Bord Pleanala to examine the application by Irish Cement to develop handling and storage facitilies at its plant in Mungret to burn waste material and alternative fuels in their cement kiln there.

The kiln at the plant is old and not suitable for burning tyres or other material, Ms Ni Riada said, and she was concerned that the company did not have the staff or expertise to manage or maintain an incinerator, in light of the company's poor track record on blow outs.

“You keep referring to the incinerator as a cement plant. All of us look at it as an incinerator,” said the MEP. She was concerned, she added, about the risk of dioxin poisoning getting into the food chain.

But the medical expert witness called by Irish Cement to give evidence on their behalf, said he had “no concerns regarding human health.”

Dr Martin Hogan said that a full Human Health Risk Assessment had been carried out which showed that the intake of dioxins that could arise from potential emissions from the factory was within World Health Organisation guidelines. The highest possible intake, he said, was just 25% of the limit set.

“In no cases will air quality standards be exceeded,” he said. “We can say with confidence that there will be no adverse effects on human health.

He was also confident there would be no adverse health effects from noise nor would there be any significant impact on water or ground water.

Dr Hogan dismissed concerns that mosquitos could develop in pools of water in tyres stored as fuel for burning at the plant.

“Even though the Irish climate is not conducive to the breeeding of disease bearing moquitos, even if it were, there is no shortage of water sources for them to breed. They would certainly not be dependent on small amounts of water in old tyres as they might be in other countries,” he said.

Earlier, other witnesses for Irish Cement, pointed out that replacing fossil fuels with waste material, including end of life tyres, could reduce carbon dioxide emissions by up to 40,000 tonnes a year, reduce the company's reliance on imported fossil fuels and make Ireland more self-sufficient in dealing with end of life tyres.

Limerick was the only cement factory in the country with no permission to use alternative fuels, witness Brian Gilmore said.

But he rejected the contention by Limerick against Pollution that they planned to burn 90,000 tonnes of tyres each year, explaining that it would be excess to their requirement.

Alternative fuels and materials would be sourced from licenced waste management contractors, the hearing was told, and would be introduced on a gradual basis.

However, some of this altnerative material could be considered hazardous, witness Thomas Burns said.

“However, all of these materials can be combusted effectively in the kilm because of the very high termperatures which ensures complete destruction and no increase in emissions from the site,” he said.

Dermot Flanagan, senior counsel for Limerick City and County Council which granted planning permission to Irish Cement for it proposal, said the authority had considered the physical aspects of the application.

Many elements were properly the function of the Environmental Protection Agency, he explained.

For Irish Cement, it was a matter of profits, he argued, yet the people in the area would be carrying all the risks. It is a material change of use, he said.

This application was contrary to Limerick’s plans, he argued, where future jobs lie with clean industry.

The company can't keep to their own limits, by their own admission, he continued. How then could they keep to new limits?

Cllr Daniel Butler FG argued that the focus should be on people.

“Let me make it clear that the people of this area do not support this application,” he said.

“I urge you to listen to those concerns and address them by supporting their calls to refuse this application. This is not in any way a suitable setting for the introduction of this heavy industrial process.”