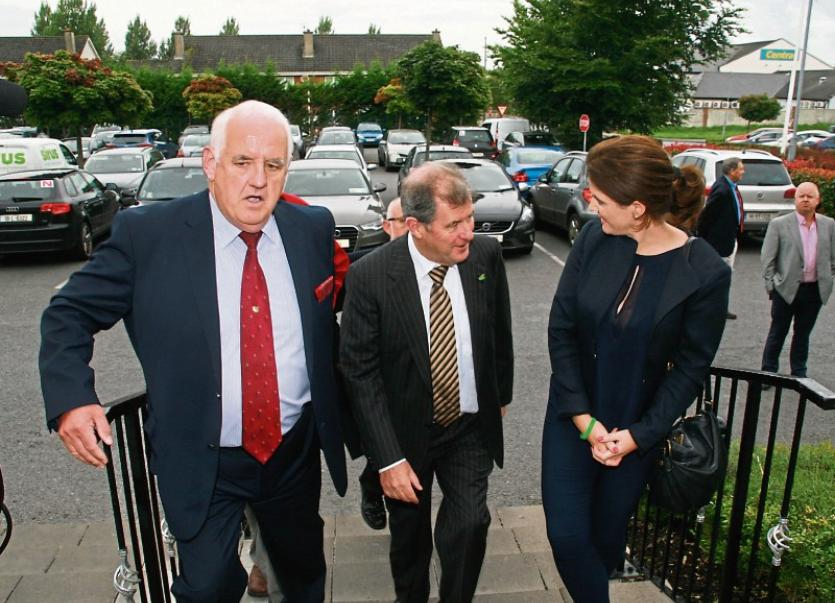 JP McManus arriving at the South Court with Joseph Burke and Claire Keating for the start of the oral hearing into Irish Cement's plans for Mungret Picture: Adrian Butler

“I'M concerned. Beginning and end,” JP McManus said when he arrived at the South Court Hotel in Limerick this Tuesday morning, where the An Bord Pleanala oral hearing into Irish Cement’s plans to burn tyres and other waste for energy, was taking place.

Mr McManus had a number of people in his entourage including former county state solicitor John Power.

Fianna Fail TD Willie O'Dea arrived early for the hearing, where he is expected to speak later today or possibly tomorrow.

“I have been asked to speak by Limerick against Pollution,” he said.

“We are here to give the public reaction to the whole thing. The public reaction has been pretty horrendous. This isn’t just a question of replacing landfill with incineration. They have to import a whole lot of waste to keep the thing going. In other European countries, these things are in more rural areas, not in built-up areas smack bang on the edge of a very rapidly growing area of the city.”

Liadh Ni Riada, Sinn Fein MEP, said she was attending to represent the people who have “huge concerns about the toxins, the human cost of it in terms of health”.

“Irish Cement have to be held accountable," she said.

Meanwhile, Tim Hourigan and others from Limerick against Pollution staged a mini-protest before the hearing.

“After 18 months, we are ready,” he told the Limerick Leader.

“We have done our homework and are ready to bring all the arguments against this plan, its flaws, its risks, its dangers and put them before An Bord Pleanala and encourage them to refuse planning permission.”

Limerick City and County Council were represented as were Irish Cement.

The hearing was opened at 10am by the inspector for An Bord Pleanala, Michael Dillon who outlined the reason for the hearing and asked people to keep their contributions brief and to the point and to avoid repetition.

“The hearing will continue as long as is necessary,” he said.

He also said he had inspected the Irish Cement site on Tuesday, August 8.

“It is not a court of law,” he stressed.

Limerick against Pollution asked that the hearing would sit late on one of the evenings to facilitate people who were not able to attend during the working day.