Turning the tide on rural decline in Kilmeedy and Feenagh 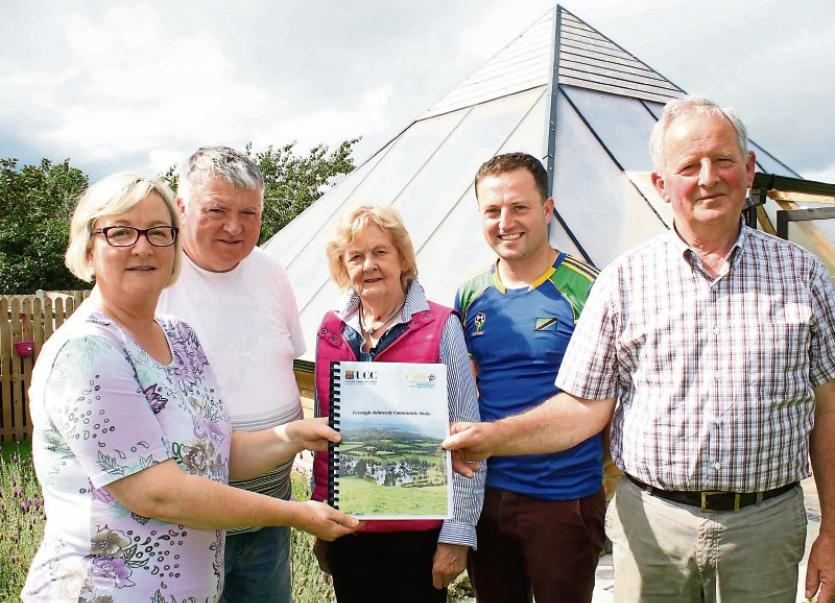 A NEW survey carried out in Feenagh-Kilmeedy puts the spotlight on the many challenges and problems facing this rural parish but also highlights the huge efforts that have been made to ensure its survival.

And the survey’s authors, Siobhan Kearney and Siobhan Kelly, have made some key recommendations in their final report.

“It is up to us now put meat on those bones,” Seamus Murphy, chairman of Kilmeedy Development Association said, following the formal launch of the survey on Sunday.

The survey was undertaken after community activists in Feenagh Kilmeedy met with Professor Will Brady of the Environment and Planning Department at University College Cork. The authors of the report, Mr Murphy explained, looked at the demographics and other data for the area but they also conducted face-to-face interviews with individuals and organisations, with schools and with businesses.

“We had two open sessions, one in Feenagh and one in Kilmeedy,” Mr Murphy said. “We had good buy-in from everybody.”

And people were frank and up-front about what has been achieved and what was needed, he added.

The survey revealed what people knew instinctively: that the parish population was declining and they needed more people of working and family age. And over half the households were one or two person households.

The dependency rate, or the percentage of the population under 16 and over 60 in Feenagh Kilmeedy is 66%, Barry Gilbourne, a member of the Kilmeedy Development Association explained.

This is much higher than the Limerick average of 44% and the number of people aged 20-34 was very low.

“We would like to see that addressed. It puts pressure on services. We have to try and attract back the 30-44 year olds,” Mr Murphy commented.

The survey also revealed a very high rate of home ownership and a lack of private or  social housing to rent which militates against new, younger people coming to settle in the parish. In turn, this has a knock-on effect on school numbers.

The high number of vacant properties is also an issue, Sheila Roche, another member of the Development Association pointed out.

“If you could do up half of those and get people to come and live there, it would be great,” she said.

The report acknowledges one of the area’s key assets: the strength of bottom-up, community led planning which has resulted in the formation of Kilmeedy Development Association, in the establishment of a Housing Association and the building of sheltered houses, in the development of Aras Ide in Kilmeedy as a training centre for childcare and horticulture courses and as a community centre and the transformation of the old Garda barracks into a creche, community garden and community office.

A Heritage Group has also been set up which has carried out surveys of the parish graveyards and is now embarking on a survey of old houses, all of which, group member Sean O’Sullivan is confident, will help people from the  diaspora trace their roots.

But a  key recommendation, Mr Murphy explained, is that the parish needs to have one umbrella organisation speaking with one voice for a parish which stretches across two distinct communities.

“By seeing Feenagh and Kilmeedy as one, services will be maintained,” the report states.

Other recommendations include the need for a community space for informal gatherings and for young people and this ties in with a plan to open a community shop and cafe in Kilmeedy.

Better broadband connectivity is also identified as vital  to developing small or medium size businesses in the area. And the report recommends that the rural bus route be reconfigured.

But the report also highlights the parish’s outstanding natural landscape and its walking routes which are assets that can attract people to the area, both as visitors and to settle.  For now, hopes are high that further progress can be made.