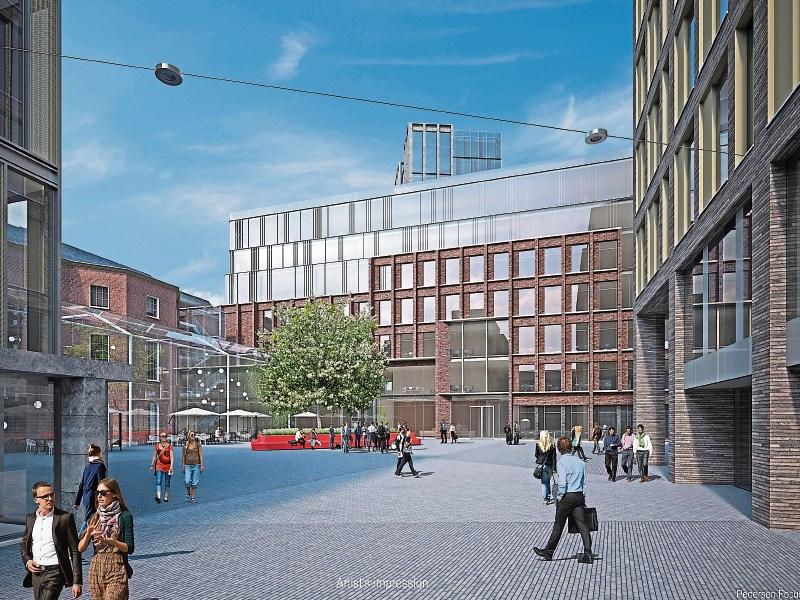 An impression of how the €150m Project Opera development will look

IN response to questions about a lack of residential space included in the €150m Project Opera site, Limerick Twenty Thirty has said its “core objective” is to impact “employment levels” through its developments.

The company - a special purpose vehicle created by the council and charged with delivering the Opera site and others like it in the city - sent out a robust statement late on Wednesday after questions were raised over the flagship project of the 2030 plan.

At present, the proposals to transform the four-acre patch of land on Patrick Street, do not include living spaces. Instead, four tall office blocks are being planned which it is hoped will ultimately being 3,000 jobs to the city.

But with urban living space at a premium, politicians, homeless charities, auctioneers and business people have called for accommodation to be included in the project, which is aimed at regenerating the city.

Limerick Twenty Thirty said, with regard to the Opera site, that it had “conducted significant market research” and was “essentially delivering what the market wants”.

“That level of investment will lead to 3,000 people employed at the site and will, in turn, create the market for residential properties, leading to significant investment in the development of a range of residential sites across Limerick.

“Currently there is active planning for approximately 2,500 residential units in Limerick and, of these, 612 are already under construction. Against that, the projected demand for housing up to 2021 is 1,770 units.

“The Opera Site will take six years to deliver and in parallel with that we will be working with the relevant stakeholders with regard to Limerick’s residential requirements. This will be delivered through a mix of private sector and local authority investment.”

Auctioneer Tom Crosse, GVM, said putting accommodation in was a “no brainer”, while retailer James Ryan said it would bring a “buzz” to the city. However, Cllr James Collins, a board member of Limerick Twenty Thirty, said it was not the company’s role to “rebuild the whole city”.

“We’re there as a catalyst to kick-start the market. What we’re doing is reacting to the lack of suitable office space,” he said.

Councillors will decide on the multi-million euro plans in a vote at a meeting in October. And Solidarity’s Cian Prendiville said his party will be seeking to amend the planning application to include some units of housing – and will be launching a petition in the hope of persuading fellow members to do likewise. He said a feeling of “disgust” exists that no houses have been included.

”We only need 11 [councillors] to support proposals for quality affordable accommodation in the plans. If enough people make formal submissions, and get on to their councillors, we can bring huge pressure to bear and ensure we don’t miss this opportunity to breathe new life into the centre and tackle the housing crisis,” he said.

Una Burns of homelessness charity Novas confirmed it would be making a submission seeking this.

“We fundamentally believe any economic development and growth is underpinned by a very functional and stable housing, health and educational platform. It’s very evident in Limerick we do not have a vibrant and stable housing programme. The situation is deteriorating all the time.”

Jackie Bonfield, of the Mid-West Simon Community, admitted she is disappointed with the plans.

“We believe every opportunity to provide accommodation should be sought by the council in light of the fact we are in a housing crisis. If the opportunity arises within the Opera Centre, they should be seriously looking at it, and bringing all the parties around the table to discuss the opportunities.”

Mr Crosse said: “I am at a loss as to why they’re not including accommodation there. We need people in the city to have it back up and running. There are opportunities to refurbish Georgian buildings, but the cost is prohibitive. So I would think purpose-built accommodation is a no-brainer.”

“It’s like a race to get out of the city at 5.30pm. If people were living here, they might stroll to the pub for a pint. They might buy a new shirt or tie from Brown Thomas. We need more housing.”

Aine Ni Charthaigh believed that not putting accommodation into Project Opera could “exacerbate the donut effect”. She asked if it was in contravention of any development objectives.

“Creating a place to live is one thing, but being in a city where it’s pleasant to live is another thing. We could see single, soulless buildings, where no-one is walking around at night.”

Artist Alex Fielding called for the office blocks to be turned around.

“We need proper ideas. Let’s not make mistakes. I love the idea of these buildings, but they are on the wrong side. People in offices need more light,” he said.